Maybe I’m wrong, but it seems baseball outside of Milwaukee has written off Francisco Rodriguez for years. It likely has to do with his 2012 campaign, which featured a 4.38 ERA to go along with seven blown saves and was arguably the worst season of his 14-year career. After that, he went unsigned throughout the entire offseason only to re-sign with the Brewers on a minor-league deal.

He was good in his time with Milwaukee that year, but after being traded to the Orioles, he imploded with a 4.50 ERA in 22.0 innings. Again, he found himself without many offers on the table and returned to the Brewers for the low cost of $3.25 million. By every account (except FIP), he was very good last year. Yet still it seemed there was limited interest in the closer this past winter after a 44-save season.

So again he signed with the Brewers — though this time, it would be on a multi-year deal. And once more, he’s performing quite brilliantly. Though, I’m unsure if that is being properly recognized by the larger baseball world, in part because of where the Brewers are in the standings. More perplexing is the notion that K-Rod was never an upper-echelon relief pitcher.

This is Francisco Rodriguez’s 14th season in the major leagues. He currently possesses a 31.9 percent strikeout rate, 7.7 percent walk rate, .155 batting average against, 0.80 WHIP, 0.36 HR/9, 1.08 ERA, 2.14 FIP, 2.29 SIERA, 0.58 DRA, and 76 cFIP. I know that’s an unnecessarily long list, but it’s to illustrate that by any measure, and so there can be no debate, K-Rod has been truly excellent this season. Perhaps more open to debate is my assertion that this is more the norm for him than a stand out season.

Even in that season, though, he might not have been truly bad. In addition to his poor ERA, his DRA was 4.16 which isn’t good. But, his 3.83 FIP, 3.57 SIERA, and 94 cFIP all suggest that while he certainly wasn’t excellent, he wasn’t quite as bad as the ERA might lead one to believe.

Francisco Rodriguez has pitched in the majors in parts of 14 seasons and only his 2012 campaign could be called bad. Even then, the advanced metrics suggest that he pitched marginally-to-moderately better than his ERA indicates. Thus, even in his worst season, he was closer to merely average than honestly ineffective. Another way to say this is that he’s been above-average to superlative in 12-of-13 full seasons (his first “season” in MLB was just 5.2 innings). All this leads me to wonder, why weren’t teams pursuing his services prior to this season?

RUNNING OUT OF GAS AND AWAY FROM PERSONAL DEMONS

His average velocity has decreased ever since. This year he’s averaging between 89.52 and 91.21 mph. His peak velocity so far was recorded at 92.95 mph. That’s a stark contrast, showing a steady decline over years. Here is his velocity chart over that time: 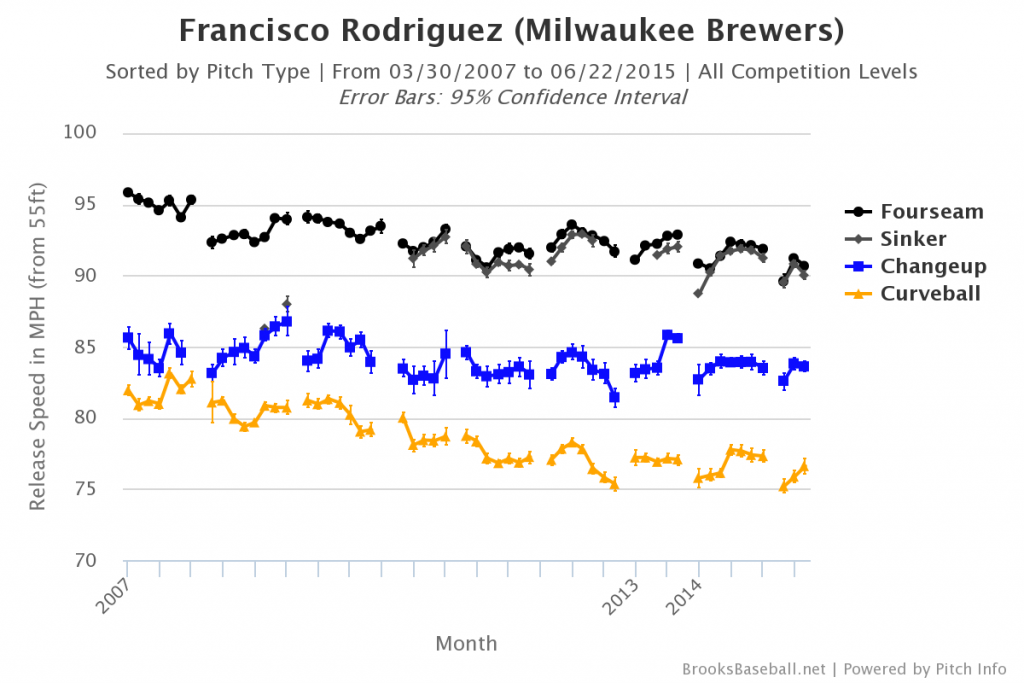 Early- and mid-career Francisco Rodriguez was a very different pitcher to present-day K-Rod. One might have been able to ignore the decline in velocity had it not been for the start of another disturbing trend, which essentially began in 2012.

In that season, he saw a sharp increase in home runs allowed. His HR/9 rose from approximately 0.50 the previous two seasons to exactly 1.00. The next two seasons only saw that issue intensify. In 2013, it jumped to 1.35 and last year it soared to 1.85.

If a team looked at his declining velocity and increased home run rate, they couldn’t be blamed for linking the two and expecting the HR/9 to continue to be inversely proportional to his velocity. Francisco Rodriguez wouldn’t be the first pitcher to lose his effectiveness after his fastball velocity abandoned him. But there might be another more unfortunate reason teams shied away.

Outside of baseball, Francisco Rodriguez has a troubling history of violence. In late 2010 Rodriguez was arrested for assaulting his then father-in-law.  Two years later in 2012, he was charged with domestic violence. Those charges were later dropped when the alleged victim and only witness left the country.

Leading up to the 2013 season, Francisco Rodriguez couldn’t find a buyer for his services and ultimately re-signed with the Brewers on a minor-league deal. It’s impossible to be certain how much his 4.38 ERA from 2012 was a factor versus the domestic violence charge, but it’s a fair guess that they were both factors to varying degrees.

With the deadline quickly approaching and the Brewers clearly in sell mode, it’s near-impossible to write anything about a Brewers player without considering their trade value. There might be no one on the Brewers, save for Ryan Braun, whose value is more obscure.

Over the last three seasons, Francisco Rodriguez has exhibited an ability to adjust to the pitcher he’s become — essentially relearning how to pitch with lower velocity. His three lowest walk rates have come in the last three years. His 0.99 WHIP last year tied a career best and it’s even lower (0.80) this year. His BAA (batting average against) peaked in 2011 and plateaued for the next two years around .240; however, it has been below .200 again the past two seasons. And despite having trouble with home runs, cresting last year, this year (0.36 HR/9) Rodriguez is having no such problems.

Performance-wise Francisco Rodriguez should have mostly, if not entirely, rebuilt his value to contending teams. Here is where he ranks among relievers (min. 20 IP) in relevant statistics:

Not all of those numbers are elite, but they are all very good. Any team looking for relief help should have their interest piqued by Rodriguez’s performance thus far. Of course, on-field performance isn’t the only factor that goes into assessing a player’s value.

For starters, teams must consider his history of violence. If Francisco Rodriguez was blacklisted after his 2012 season, there is little reason to believe that situation has dissolved. Ray Rice and Adrian Peterson were big stories in the offseason for similarly disturbing reasons, so teams are aware now, if not more so, the PR risk they’d take in bringing aboard a person with K-Rod’s history. Unfortunately, moral high ground is not always a concern in sports. It is possible this will have little-to-no impact on K-Rod’s trade value.

Clearly, this year’s salary should not be a concern, but any team would owe him at least another $9.5M and as much as $13.5M over the next two years. Add in this year’s salary, and that’s $17M over three years (though, any team that trades for him would only pay a pro-rated portion of this year’s salary). That’s not exactly cheap, but it seems hard to believe that it’s an insurmountable obstacle.

Huston Street is not a perfect comp since he throws sinker/slider/changeup whereas K-Rod throws fastball/curveball/changeup, but at least one interesting similarity exists. The biggest knock against K-Rod is his declining velocity, but Street has shown a similar decline. His average velocity is actually a bit lower than K-Rod’s. So they’re both “closers” with decreasing velocity.

Another reliever whose name is being heard in trade rumors is Jonathan Papelbon. He makes $13M this season and has a vesting option (which vest with three more games finished) for $13M in 2016. That’s $26M over two years. In other words, he makes way more in two years than K-Rod will in three. He’s essentially guaranteed to make $13M next year, and K-Rod could make $13.5M over the next two years.

When you compare those three contracts, K-Rod’s hardly seems out of line. Think about this, though: over this past winter, the White Sox gave Zach Duke a three-year deal worth $15M. We like to think that clubs have “learned their lesson” about over-paying relievers. But if Duke, a solid but unspectacular middle reliever with a limited track record of success, can get that kind of money, either teams haven’t learned that lesson or relievers are worth more than we like to think. Furthermore, if $15M is what a good middle reliever can reasonably expect now, K-Rod’s contract looks like a downright steal.

Teams may still be put off by Francisco Rodriguez’s contract but they shouldn’t. He has shown he’s able to pitch with lower velocity, which mitigates concerns over further decline. And right now he’s on pace for one of the best seasons of his career (albeit in just 25 innings so far). If teams are going to pass on him at the trade deadline, I have to believe it’ll be because of his personal failings. That’s what makes his trade value difficult to assess. If he weren’t carrying severe off-the-field issues or if I knew teams didn’t care, I would say the Brewers could get a pretty huge haul. Now, I’m only comfortable saying they should be able to do better than the last time they traded him (for Nick Delmonico).

Tags: Francisco Rodriguez |
Derek Harvey
Follow @D_J_Harvey
Derek Harvey is a staff writer for BP Milwaukee. He also contributes to The Outside Corner and is a feature writer for Brew Crew Ball. He's taking over the world one baseball site at a time.
read more from Derek Harvey

2 comments on “Does a Dominant K-Rod Have Trade Value?”

K-Rod has been excellent for the Brewers and he has a very affordable contract for a closer. However there are probably better options out there for teams other than him that cost about the same as him like Chapman, Papelbon, or Clippard. Add in the fact that not many contenders need a closer or want to pay closer money for a pitcher in a setup role and you have a very limited trade market for him.