As our benevolent overlord J.P. Breen wrote yesterday, the Brewers’ bullpen has been (or has deserved to be) one of the few bright spots in this altogether miserable 2015. Perhaps no reliever on the staff has pitched better than Will Smith, the owner of a sparkling 1.35 ERA and even shinier peripherals in his 26.2 innings of work. Although middle relief doesn’t earn much gratitude for its largely forgotten task, Smith’s performance thus far — driven by one spectacular pitch — deserves recognition, or at least a closer look.

Developing in Kansas City’s vaunted minor-league system, after the Angels shipped him there for Alberto Callaspo, Smith didn’t stand out. He took up space as just another back-of-the-rotation starter, with nothing special in terms of future outlook. Furthermore, his brief 2012 tryout in The Show — 89.2 innings of warranted 5.32-ERA ball — did nothing to dispel this notion of mediocrity.

In 2013, things slowly started to turn around. Jeff Sullivan noted that Smith took a step forward at Triple-A and in the majors, after shifting to more of a swingman role. Following that season, Milwaukee acquired him in the Nori Aoki deal, and he rewarded the organization’s faith with a solid 2014 campaign. Across those two years, Smith accrued 96.0 innings of major-league relief, in which he posted a combined 3.32 ERA. Those numbers rightfully didn’t make him a star, but he still proved himself to be a respectable bullpen option.

Smith has since become, for lack of a better word, a star. The aforementioned 1.35 ERA, an incredible 1.53 FIP, an astounding 0.44 DRA — however you slice it, Smith has blasted his way to superiority. And he has primarily ridden a pitch that he didn’t even have in his arsenal until a few years ago, the slider.

Writing last year, Andrew Gruman told the origin story of the pitch. The coaches at Double-A Northwest Arkansas in 2011 thought Smith needed to develop a slider to help him get through lineups consistently, and Smith — who abandoned it in high school because of injury concerns — heeded their advice. He didn’t use it much as a starter, but upon moving to relief full-time, the slider became a primary pitch. The lefty featured it 32.0 percent of the time during the 2013 and 2014 seasons.

In that span, the pitch paid off handsomely. Of the 502 times that Smith threw it, it resulted in a swinging strike 160 times — giving it a 31.9 percent swinging-strike rate. (The league average swinging-strike rate usually hangs around 9 percent, while hitters whiff at an “above-average” slider 14.4 percent of the time.) Traveling an average of 82.4 mph, with 4.1 inches of horizontal movement and a half an inch of drop, it buckled the knees of the competition.

With that said, Smith didn’t fly high in those years. What has he done differently this year to take the next step?

The slider hasn’t significantly changed in terms of velocity or movement. One thing has changed, though — he’s thrown it a lot more: 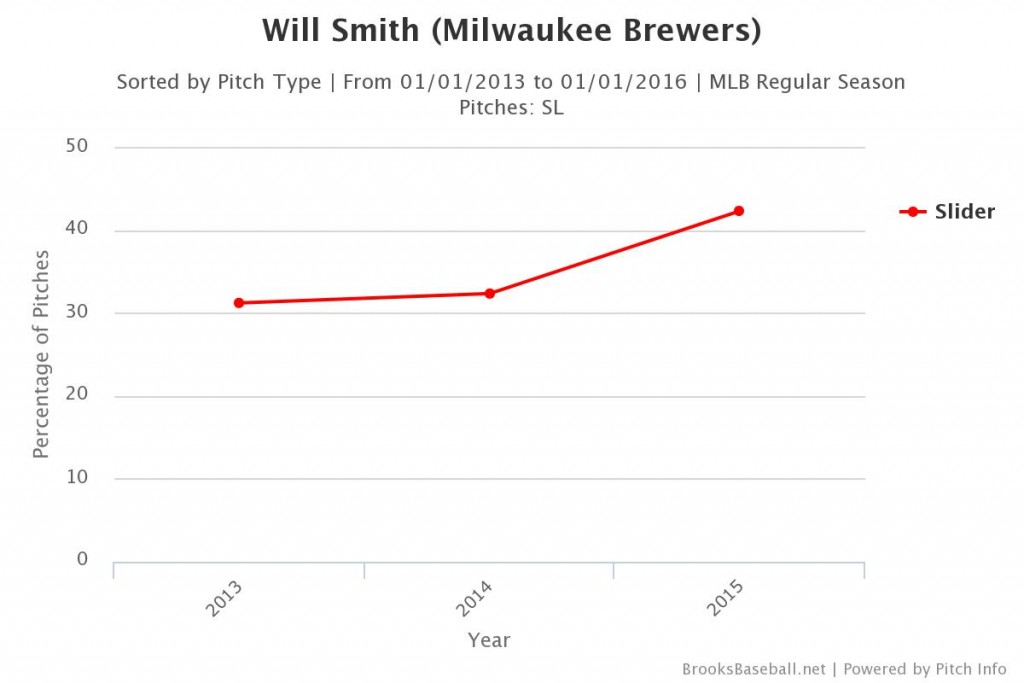 For these past three months of the 2015 season, Smith has relied on the slider more than any other pitch in his repertoire. While it has slightly declined in terms of whiffs — with a swinging-strike clip of “only” 29.9 percent — opposing hitters still can’t touch it. Its increased quantity, by extension, means they can’t touch Smith either.

Here’s the thing, though. Sliders usually don’t do as well against opposite-handed competition. Smith, recognizing this, did not use it much against right-handers in 2013 or 2014:

Replacing the slider with an all-around inferior sinker and curve didn’t prove successful for Smith. In that span, righties battered him for a .301 TAv (compared to .210 for lefties). Hence, Smith’s general mediocrity in middle relief. If a pitcher can only retire one type of batter, he won’t ascend to greatness. He won’t become anything more than a situational reliever.

But here’s the other thing. Even in the years before the current one, Smith’s slider excelled against right-handed batters, inducing a 27.3 percent whiff rate without much damage when put in play. For whatever reason — perhaps its above-average horizontal movement, or the fact that he buried it in the same place against everyone — the opposite-handed hitters flailed at his slider just as much as same-handed hitters did.

Therefore, come 2015, Smith has thrown his previous approach out the window:

Smith has upped his slider usage a bit against fellow southpaws, but righties have seen a significant spike, nearly a 50 percent increase. It’s been as effective as ever, giving him a .148 TAv against righties — far lower, in fact, than the .231 TAv lefties have compiled. That should regress a bit, but the overall trend should remain. Smith can now retire anyone, regardless of handedness, and his results have shown that.

Can Smith continue to throw the slider this much, though? Jeff Zimmerman’s research has suggested that Smith’s original thoughts on the pitch (that it would lead to injury) may have some validity. Nevertheless, the superiority it has granted him may prove too tempting, and if he manages to remain on the mound, it appears likely that he will sustain his recent success. Thanks to his one wondrous pitch, Smith’s become a relief ace — on a team that sorely needs something to look forward to.

Tags: Player Analysis, Will Smith |
Ryan Romano
Ryan Romano covers Brewers baseball at BP Milwaukee, Orioles baseball at Camden Depot, and all baseball at Beyond the Box Score. He's a member of the Philip Merrill Class of 2019.
read more from Ryan Romano

7 comments on “Will Smith and The Slider of Death”