Many fans of the Brewers realized in 2015 how much they appreciated Khris Davis. Along with Adam Lind and Ryan Braun, Davis helped to keep the Milwaukee’s offense afloat in an all-around ugly year. Unlike those first two names, Davis still has relative youth on his side — he’ll turn 28 in a few months — meaning he should stand a better chance of sustaining or building upon his current level of play. While Davis is no star, he’s become a solid hitter in most regards. By one measure, though, he tops nearly all of the competition.

Like many hitters who predicate their success on power, Davis swings at quite a few first pitches. That approach had always paid off for him. Across 2013 and 2014, he banged out a .338/.390/.370 slas line on first pitches, placing 15th in baseball. In 2015, however, we saw him take his game to another echelon, as he slugged a .409/.413/1.091 first-pitch slash line. The resulting 1.504 OPS ranked second in the majors, behind only Davis’s Baltimore doppelganger. Davis has always pounced early in the count, but this season he absolutely dominated.

Compared to past years, Davis didn’t become more aggressive on first pitches. In fact, his swing rate stayed almost exactly the same, going from 32.6 percent in 2013 and 2014 to 32.5 percent in 2015. But a deeper dive reveals that he altered some elements of his approach. As manager Craig Counsell told the Milwaukee Journal-Sentinel last week:

From looking at Davis’s breakdown by pitch type, we can see that he indeed become more selective in his first-pitch swings:

According to FanGraphs’ pitch type linear weights, Davis has excelled against breaking pitches for his career (9.8 runs above average) and has struggled against offspeed stuff (ten runs below average). Swinging at more of the former and fewer of the latter in these situations thus helped him to improve his overall first-pitch output. The fact that pitchers fed him more first-pitch breaking balls in 2015 — he saw one to begin 30.2 percent of his plate appearances, up from 23.8 percent in 2013 and 2014 — helped him further.

But most of Davis’s 2015 early-count production didn’t come off breaking pitches — he clubbed seven of his nine first-pitch homers against fastballs. The selectivity in his approach thus doesn’t end at pitch type; it also involves pitch location. Davis has always hit for the most power on pitches up and in: 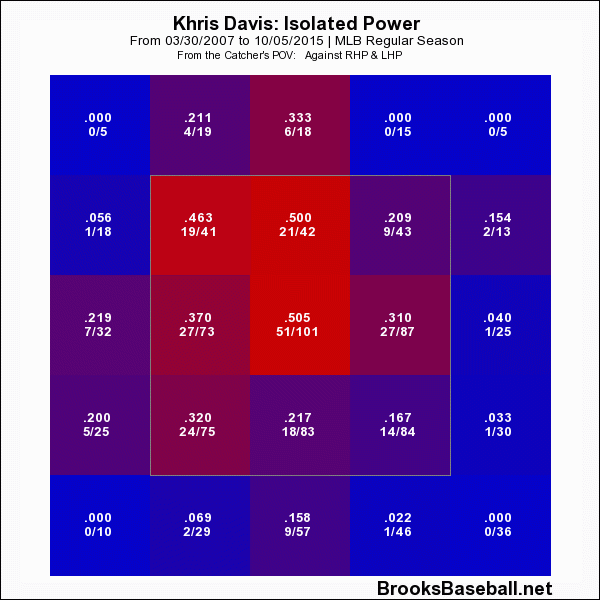 On 2015 first pitches, he offered more in this area than ever before:

Even as pitchers targeted him down and away to a greater extent than in prior seasons, Davis refused to budge. Like Counsell observed, Davis only tried to hit off the pitches he knew he could hit. In doing so, he progressed in his first-pitch production, as well as in his production overall.

Davis’s late-season power surge likely won’t carry over into 2015; Davis simply doesn’t possess the talent to consistently hit at an MVP level. With that said, he’s displayed a phenomenal bat in certain scenarios, which has carried him to where he sits currently. As the Brewers look to return to relevance in 2016, they’d certainly have no problem with Davis continuing to do this.