The five-year, $105 million extension that all but officially made Ryan Braun the face of the Milwaukee Brewers franchise finally begins next season. Braun, who turns 32 in just a few weeks, will be spending his offseason rehabilitating from back surgery. He is expected to be back in time for spring training, but the surgery will require three to four weeks of recovery before Braun can even begin his offseason preparation, according to ESPN.

That extension was signed on April 21st, 2011. Since then, Braun has been suspended for PED use, suffered nerve damage in his thumb, and had recurring issues with his oblique, including multiple trips to the disabled list, and is now dealing with the back issue all before his contract extension even kicks out its first paycheck. Braun is hardly the only example of uncertainty rearing its ugly head in contracts for franchise players. Troy Tulowitzki was traded by the Rockies in the first year of a $118 million contract for an underwhelming package. Texas’s Elvis Andrus hasn’t posted an OPS+ above 82 in the past three seasons, last year being the first of a $120 million deal. Ryan Zimmerman, with four years and $58 million left on his contract with the Nationals, can no longer properly throw a baseball and has missed 168 games in the past two seasons. And of course, Ryan Howard tore his achilles tendon on the final play of the 2011 NLDS against the Cardinals, the last game the Phillies played before his five-year, $125 million kicked in.

Talent always commands its price. Free agents command huge premiums — Braun’s five years and $105 million may look cheap next to the price tags outfielders like Jason Heyward, Justin Upton or Alex Gordon fetch this offseason. Young players still shackled to their original teams aren’t dealt without buyers emptying the farm system or selling off established stars to get them. Faced with those costs, teams from across the game’s revenues spectrum have been signing their budding star players to long deals and buying out their free agent seasons well before their original contracts are set to expire. Besides Braun, Tulowitzki, Andrus, and Zimmerman, examples include Joey Votto with the Reds, Madison Bumgarner with the Giants, and Justin Verlander with the Tigers.

So many of these deals have exposed the true cost of this kind of contract, the one signed years before it begins. Baseball is awash in uncertainty. Aging curves are generalities; a player’s career is hardly so neatly scheduled. Give it nearly four years, as the Brewers did with Braun, and there’s no end to the issues that can throw a monkey wrench into the plans.

I have little doubt that Braun will come back strong from this back surgery, as he came back strong from his other injuries in 2015. Braun, as I have written previously, has never looked like a more complete hitter. Over the past two years, he has hit an absurd .444 with an .839 slugging percentage to the opposite field. His 74 weighted runs created per FanGraphs are the most of any major league hitter to the opposite field. But he still isn’t as productive a hitter as he was at his peak, and that’s mainly because he hasn’t shown the massive pull power that defined Braun as a hitter from his call-up in 2007 through 2012.

His spray charts, via BaseballSavant, show the issue: 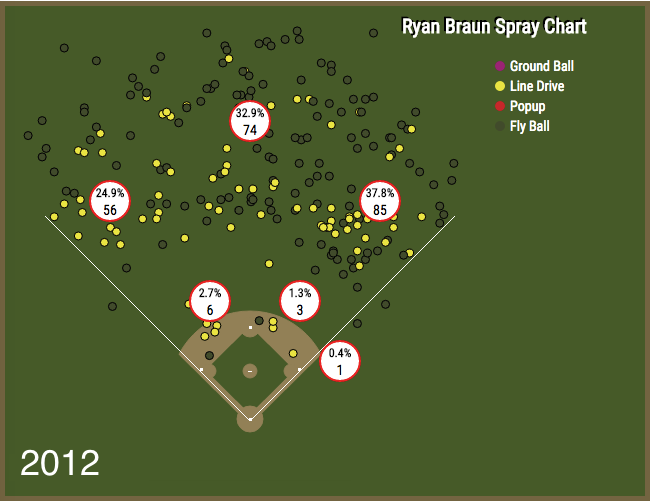 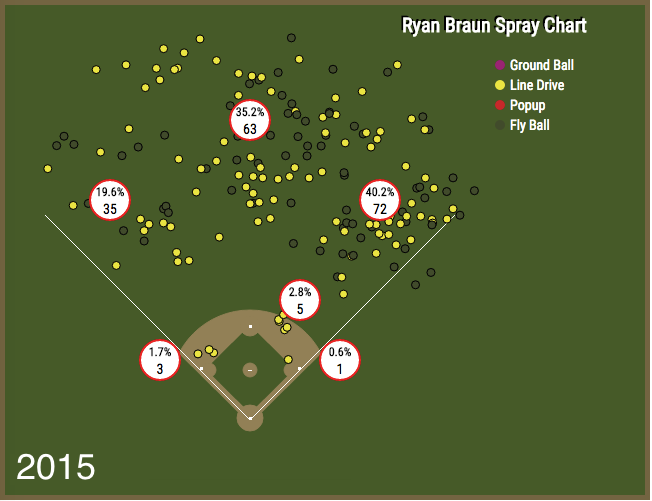 Ryan Braun was a good player in 2015, but other than his disappointing and injury-racked 2014, he has never posted an OPS worse than last year’s .854. He hit just eight of his 25 home runs to left field in 2015, and his .603 SLG to left field was the second-worst of his career (again, to 2014). It doesn’t matter how good Braun becomes at hitting to the opposite field — and he has become one of the major league’s best — without the power to blast pitches into the left field bleachers, he won’t be the franchise player he used to be.

The physical ailments he has battled for the last few years have robbed him of one of his greatest weapons. He has adapted better than anybody could have asked for and remained a great hitter and a good overall player. And now, as the contract that will pay him like the franchise player he was four years ago doesn’t even start for another five months, he already has another injury to get over before he can try and become that franchise player again. But this is just part of the deal with a contract like Braun’s. Talent always commands its price, and with Braun, one of the world’s greatest baseball players when he put pen to paper, that price was the uncertainty of the past four years.

Tags: Commentary, Ryan Braun |
Jack Moore
Follow @jh_moore
Jack Moore is a freelance sportswriter based in Minneapolis. His work can be seen regularly at VICE Sports, The Guardian, and The Hardball Times.
read more from Jack Moore