In the 2014 offseason, the Brewers let longtime second baseman Rickie Weeks walk in free agency. Not only had he generally failed to live up to lofty expectations, the club had an enticing replacement in Scooter Gennett, who had held his own in partial time. Gennett didn’t impress offensively this year, his TAv falling to .233 from .271 last year. He nevertheless seems to have the starting job locked up for 2016, as David Stearns has focused his attention elsewhere. For someone like Gennett, whose performance has fluctuated so wildly from year to year, no one can really know how he’ll hit in the seasons to come.

But I’d like to look to the other side of the ball. Gennett’s glove, like his bat, has been anything but consistent over his time in the majors. The manner of that inconsistency differs, though — whereas his hitting has wavered on a yearly basis, his fielding has varied between different metrics. Take a look at his career numbers by Defensive Runs Saved, Ultimate Zone Rating, and Fielding Runs Above Average (via Baseball-Reference, FanGraphs, and BP, respectively):

Like his infield cohort Jean Segura, Gennett receives a different appraisal from the former two than from the latter. Unlike Segura, Gennett comes out much worse by FRAA. The disparity here explains why Gennett has half as much career WARP (2.0) as he does bWAR (4.0) and fWAR (3.9).

With which measure should we agree? I’ll first note that Total Zone — the progenitor of DRS, UZR, and FRAA — dislikes Gennett as well, pinning his defense at -20 runs. The endorsement of the original defensive statistic certainly doesn’t help Gennett’s case; it instead makes the battle a little more even, with two numbers on each side.

The analysis shouldn’t end there, though. As with Segura, we’ll look to Inside Edge data to settle the stalemate. The piece linked above goes into more detail on these numbers; essentially, scouts look at all the balls hit to a player and grade him on his efficiency. Overall, this metric doesn’t think very highly of Gennett:

The bolster he sees in “likely” plays — where, among 20 second basement with 2,000 innings since 2013, he places fifth — is likely a fluke, because he fares poorly in every other area. On “even” plays, he ranks an unsightly 17th, one slot higher than he does for “unlikely” plays and one spot lower than he does for “routine” plays. Although the “remote” plays give him a more mediocre 11th-place finish, that variety doesn’t occur very often, so I don’t put much weight in it.

Nor has Gennett flopped in one particular section of the field. His spray chart doesn’t show any consistent pattern of missed plays: 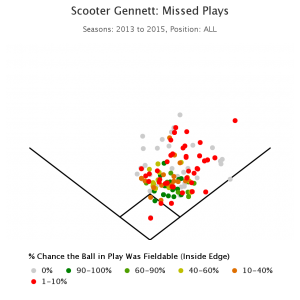 That’s about as amoebic a shape as any spray chart will take. To his right, to his left, toward the plate, away from the plate — Gennett has failed everywhere.

So the Inside Edge data also seems to validate FRAA’s opinion of Gennett. In every facet of defense, he falls far short of the standard. What, then, should we foresee in the future seasons?

From 2013 to 2015, no team allowed a higher rate of hard contact than the Brewers. If this shoddy pitching staff can improve — a possible outcome, given a full season from Taylor Jungmann and further progress from Jimmy Nelson — perhaps Gennett will better himself in turn.

Still, he has a ceiling. In August, my colleague Andrew Salzman recalled Gennett’s scouting reports, which “never produced any glowing remarks” with regards to defense; we’ve seen him fulfill those predictions to this point. He does have relative youth on his side, as he’ll turn 26 next May, but there’s only so much he can do at this point. Given his track record and his reputation, I can’t predict anything significantly better than what he’s accomplished to this point.

In the end, this simply makes for a very pessimistic view. Gennett has, in all likelihood, fielded his position terribly to this point, and I don’t think that will change at any point soon. When Orlando Arcia finishes developing, he’ll probably push Segura to second; if that means the Brewers don’t have a place for Gennett, maybe that’s for the best.

2 comments on “Evaluating Scooter Gennett’s Defense, Past and Future”