Now that Francisco Rodriguez has departed after four-ish years in Milwaukee, the Brewers don’t presently know who will finish games for them in 2016. They certainly don’t lack options — with guys like Will Smith, Jeremy Jeffress, and Michael Blazek displaying the potential to cover the ninth inning. If no one else comes into the picture, Smith may have the best shot at the role, as he put together a phenomenal 2015. His troubles against lefties this season were just a mirage; once those wash away through regression, his newfound competence against righties will allow him to excel versus all kinds of opposition.

About that last part: Smith unquestionably dominated right-handed batters in 2015. They eked out a meager .243 wOBA against him, posting a 32.4 percent strikeout rate, an 8.1 percent walk rate, a .291 BABIP, and a .088 ISO. But his superiority here didn’t occur evenly — he wore down in the later part of the season. When Smith took the hill against the Giants on September 29th, he owned a .174 wOBA against opposide-handed batters; from that game forward, however, it inflated to .328. That’s not the kind of mark that any team wants from its closer.

What should we make of the fact that righties doubled their production in the final few months of the season? As I stated in the article linked above, the sample size here is minuscule, so we should hesitate to trust these numbers. Even with the properly skeptical approach, though, there’s an unnerving trend here. First note Smith’s worrisome righty numbers, broken down by rough halves:

From the aforementioned game forward, Smith struck out fewer right-handed batters, walked more, and gave up more production on balls in play. All around, he fell apart, casting legitimate doubt on his readiness for 2016.

On a pitch-by-pitch level, Smith didn’t see any drastic changes. His strike rate versus righties fell from 66.8 percent to 66.0 percent, and he compensated for a drop in swinging strikes (from 14.9 to 13.2 percent) with a spike in looking ones (16.8 percent to 21.1 percent). So perhaps the strikeout and walk figures will normalize going forward. The problems don’t end there, however; Smith still has to throw quality strikes, and he had some difficulty there in the latter part of 2015.

When Smith struggled against righties last year — allowing a .374 wOBA against them — it happened because he left too many pitches in the strike zone: 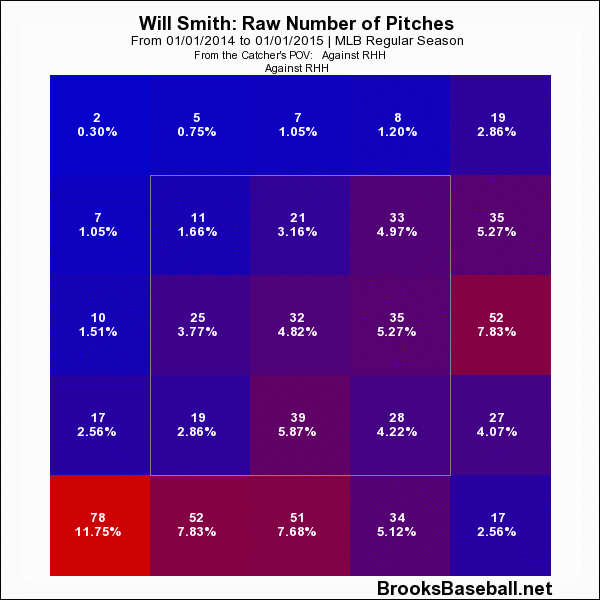 Opposite-handed hitters walloped these kinds of offerings. He thus eschewed them in the early going of 2015 — but found himself returning to them as the seasons progressed:

Smith’s low pitches have always deceived righties the most. In 2014, they whiffed at 21.6 percent of pitches in the bottom fifth of the Brooks-defined strike zone. That number increased to 25.5 percent for both halves of 2015. The problems tend to arise when he plays around elsewhere, a tendency that burned him in both 2014 and the second half of 2015.

Although left-handed batters harmed Smith in 2015, his process against them remained the same. I observed earlier this month that he continued to target them down and away, an area where they’d always floundered. With that said, he has modified his approach — intentionally or not — when pitching to right-handed batters. We saw in the first several months of this campaign that he could blow away righties if he just located properly; failing to do so will likely lead to disaster.

The sample-size caveat comes into play with all of this, since Smith faced a total of 148 opposite-handed batters in 2015. He nevertheless threw a few hundred pitches to them, which comprises a significantly larger sample. While balls in play don’t necessarily reflect true talent, the shift in placement here did allow those hitters to make harder contact. Should Smith maintain this formula, he won’t put down righties like he once did.

The Brewers traded away Rodriguez because they have plenty of relievers (and because Javier Betancourt is a useful infield prospect). They’ll find someone to seal their games in 2016 and beyond, even if Smith can’t reclaim his potential. Still, many fans of the Brew Crew would like to see that electric slider cut down hitters in the ninth inning, which requires its owner to deploy it properly. Smith possesses the talent to become an indiscriminate pitcher — he just has to remember how to locate.

Tags: Player Analysis, Will Smith |
Ryan Romano
Ryan Romano covers Brewers baseball at BP Milwaukee, Orioles baseball at Camden Depot, and all baseball at Beyond the Box Score. He's a member of the Philip Merrill Class of 2019.
read more from Ryan Romano