On the whole, 2015 was a season largely devoid of bright spots on the field for the Milwaukee Brewers. But the lone exception to this nightmare was the brilliant debut of rookie pitcher Taylor Jungmann. Jungmann debuted last June, and upon his arrival in Milwaukee he proceeded to blow the lid off of everybody’s expectations: a 2.49 ERA through August, a July in which he failed to surrender a single home run, and wins in five of his first six big-league decisions. That was the good part of the season. Unfortunately, reality came crashing down hard in September. Jungmann failed to notch a win after September 3rd, and his ERA ballooned to 3.77 overall with a 7.85 mark down the stretch.

Big-league hitters, it seemed, had adjusted to Jungmann’s less-than-dominating stuff. This notion was solidified in April, as Jungmann posted a comically bad 9.15 ERA over five starts. On April 29th, one day after the Cubs hung five runs on him and chased him to the clubhouse in the fourth inning, Jungmann was designated for assignment.

Jungmann’s replacement in the rotation, at least for now, is Junior Guerra: a 31-year-old career minor leaguer (4 innings of Major League service time coming into the season) whose 3.97 FIP and 4.63 ERA at Colorado Springs are, well, not particularly impressive. Over the span of three months, Jungmann nailed down a starting job long-term. In the two months of action since, he has completely undone all that good–and then some. What happened? How did Taylor Jungmann’s young career disintegrate so quickly and so completely?

Jungmann’s struggles down the stretch last season are actually explained away pretty easily–his extremely good luck went extremely sour. Through August, he posted ridiculously low home run rates (below 10 percent)–including July, when Jungmann kept the ball in the yard for the whole month.

Back in the day, Jungmann would have built quite a reputation as a guy who “can make hitters make bad contact.” Today, we know that such a thing does not exist, at least not to such a level that would sufficiently describe Taylor Jungmann’s first three months in the big leagues. Yes, Jungmann was doing an admirable job to pitch above his weight class–but the undeniable truth is that you can’t turn okay stuff into 35 homerless innings without a generous dollop of good fortune in the recipe.

But depending on this good fortune is a recipe for disaster, and an approach that baseball has sought to distance itself from for a reason. In September and October, the winds changed–fortune was the dog and Jungmann was the fire hydrant. A full quarter–twenty-five percent–of the fly balls hit off of him left the yard. A guy who had gotten preposterously lucky for three months found himself getting just as unlucky for a month–and since this guy was, at best, an average specimen to begin with, the correction was bloody.

But in spite of the surface troubles, Jungmann was pitching about the same as he had all season. His fastball velocity wasn’t impressive, but it also wasn’t petering out from fatigue as the season wore on. He even slowed his changeup down just a touch, creating a sharper contrast. 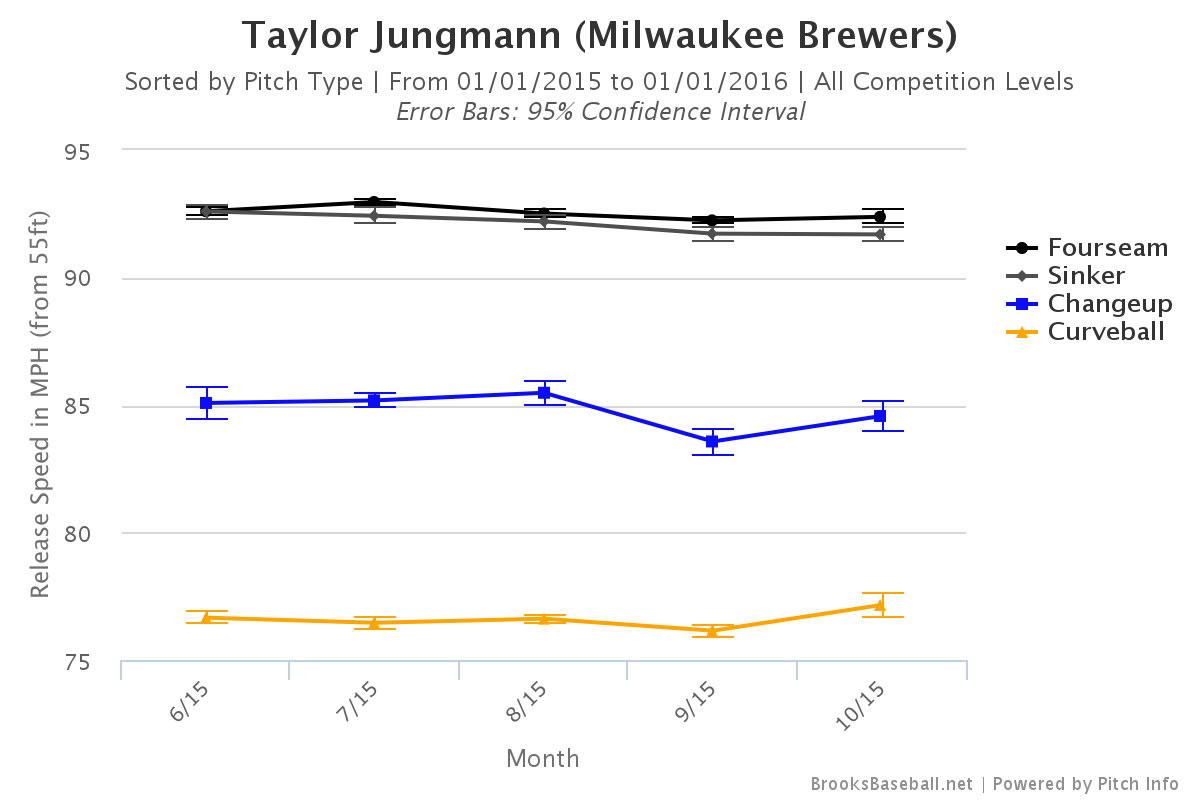 Meanwhile, his sinker and curveball were every bit as effectively bitey as they had been the whole season.

In light of this, the logical projection for Jungmann’s 2016 season fell somewhere between the two extremes. He wasn’t sub-3-ERA good, but he wasn’t light-‘em-up bad, either.

But this year, Jungmann has been an absolute train wreck each and every time he takes the mound. It was surreal enough when he found himself relegated to Colorado Springs before the blooming of May flowers, but since the demotion Jungmann has hung up two more bad starts–against AAA hitting, no less! Last year’s stretch decline was a result of bad luck, but this year has been a less encouraging story. For the first time in Jungmann’s short Major League career, his peripherals line up with his surface numbers–he’s not just getting unlucky anymore, Jungmann is a noticeably worse pitcher than he was last season. Three major concerns have manifested themselves in harmony with one another, and combined to turn Jungmann from a guy you could call on every fifth day into a guy you don’t want to call on unless you’re shopping for insurance rates.

Last year’s Taylor Jungmann worked off of a four-pitch arsenal. His fastball and curve were the clear-cut #1 and #2 offerings, but he also sported a sinker and changeup. While he threw the third and fourth pitches far less often than the other two, they would still account for approximately 15-20 percent of his arsenal. 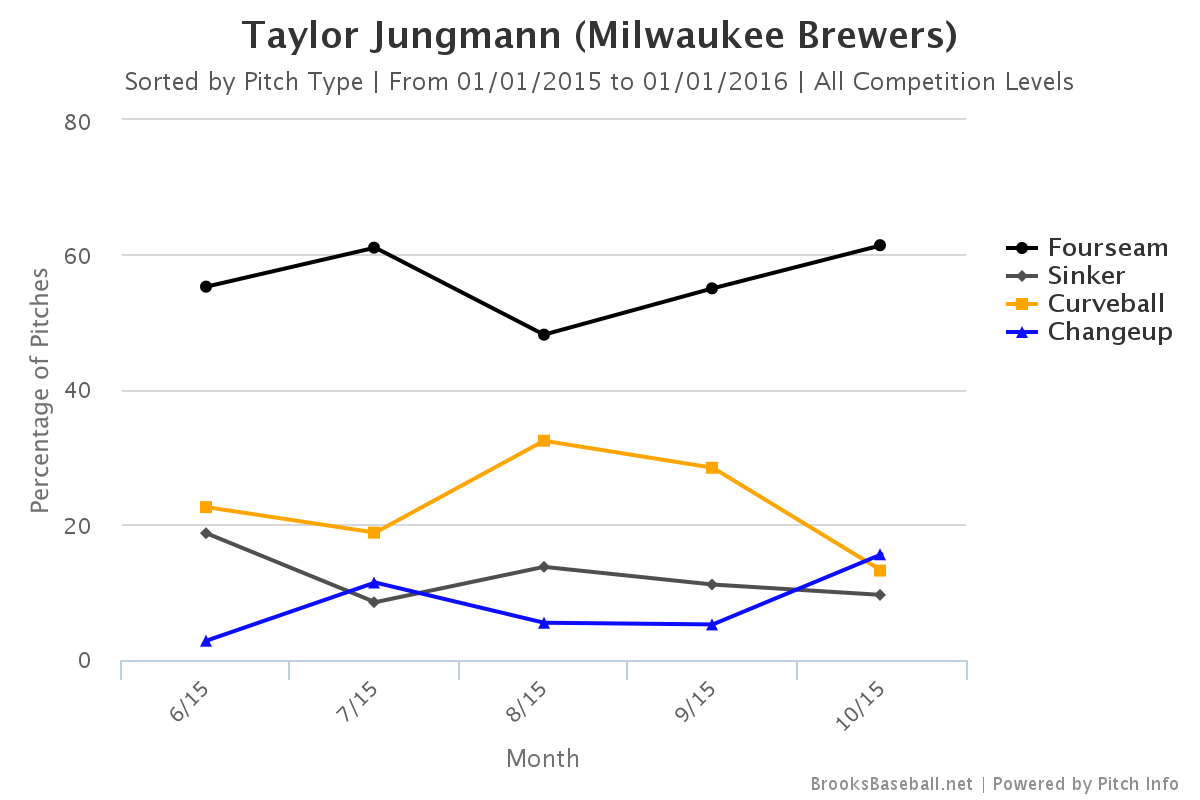 And it’s not like they were bad pitches–opposing hitters batted only .244 against the sinker, and .143 against the change! For whatever reason, though, Jungmann has dialed back his secondary offerings this year and relied on his four-seam fastball and curve almost exclusively. The one curious exception seems to be his April 21st start against Minnesota–but take that game out, and the sinker has been completely absent from Jungmann’s repetoire. 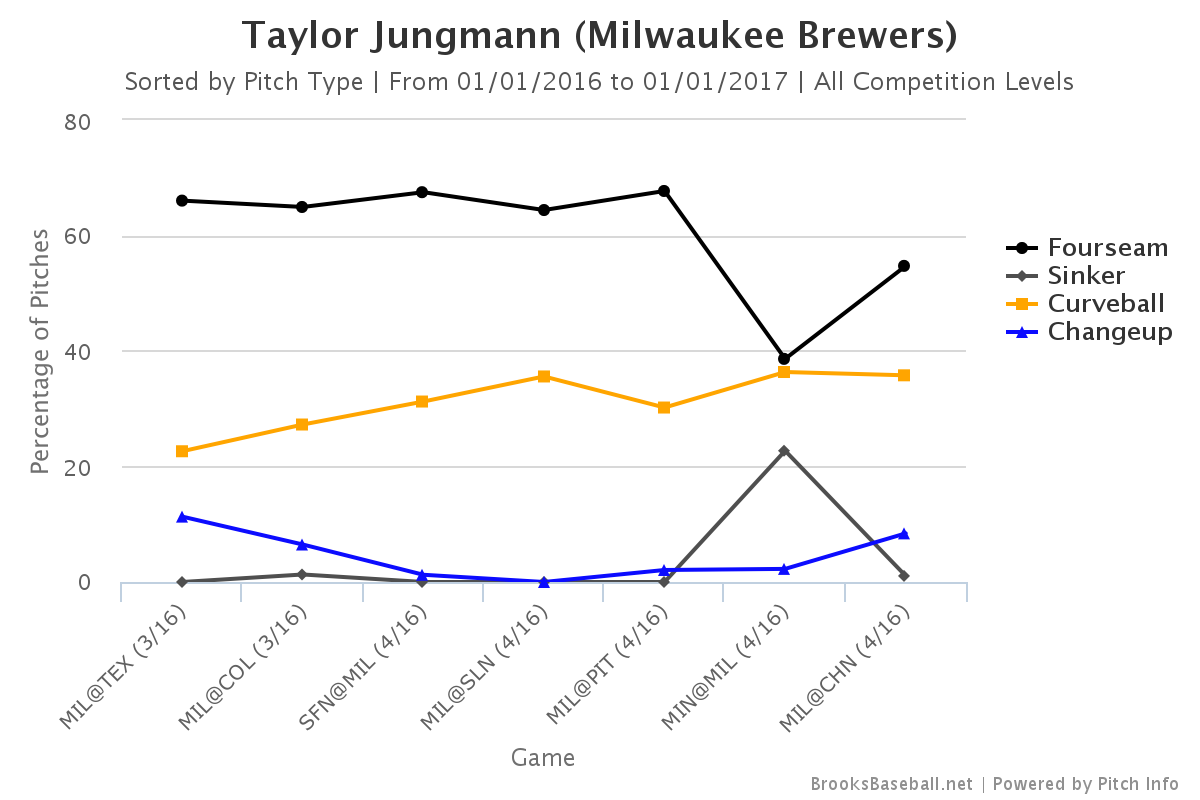 Traditionally, two-pitch pitchers are bullpen guys, and there’s a reason for that. On two or three trips through the batting order, the entire lineup will acclimate themselves to both pitches–unless your stuff is so overpowering that familiarity doesn’t matter. This is not the case for Taylor Jungmann, and it’s no coincidence that he has been chased before the fifth inning in more than half his starts this year.

Jungmann and the Brewers need to end this doomed experiment immediately. One of Jungmann’s primary areas of focus in Colorado Springs should be restoring that sinker and changeup to his weapons cache. Since none of his pitches, on their own, are good enough to carry him, he needs to be able to utilize all four effectively like he did last year if he ever wants to touch that level of success again.

Sometimes, the data paints a picture so clear that even the blind can see it.

That’s a pattern, and it’s not one that’s trending in the right direction. Last season, Jungmann established himself early on as a guy who wouldn’t make mistakes and walk hitters–as a result, he was able to get them to chase pitches outside the zone somewhat regularly: 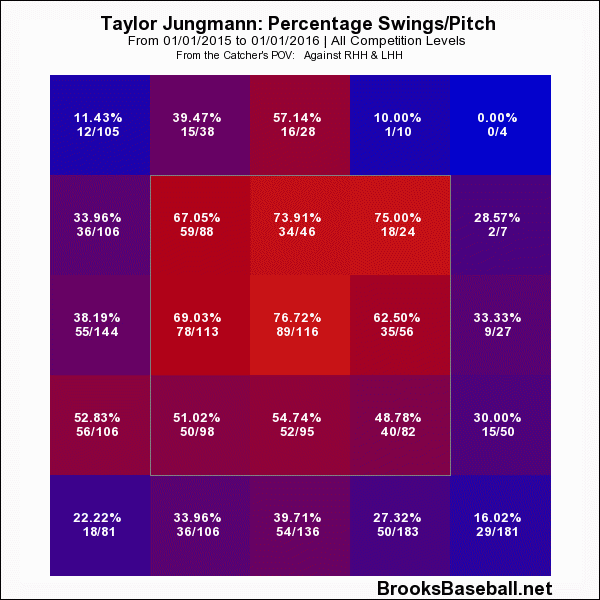 And, while this season’s sample size is admittedly much smaller so far, it’s clear to see that, for whatever reason, the fish just aren’t biting this time around: 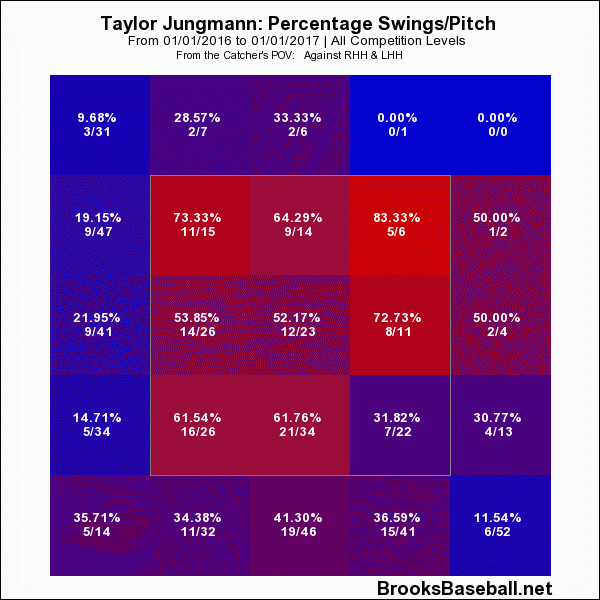 With only two pitches at his disposal, Jungmann is fighting an uphill battle with every at-bat. And clearly, they are relishing the non-challenge. They’re not biting on the chase pitches, and they’re spoiling the out pitches foul–following right in line with this narrative, Jungmann’s whiff rate dropped off alarmingly in April: 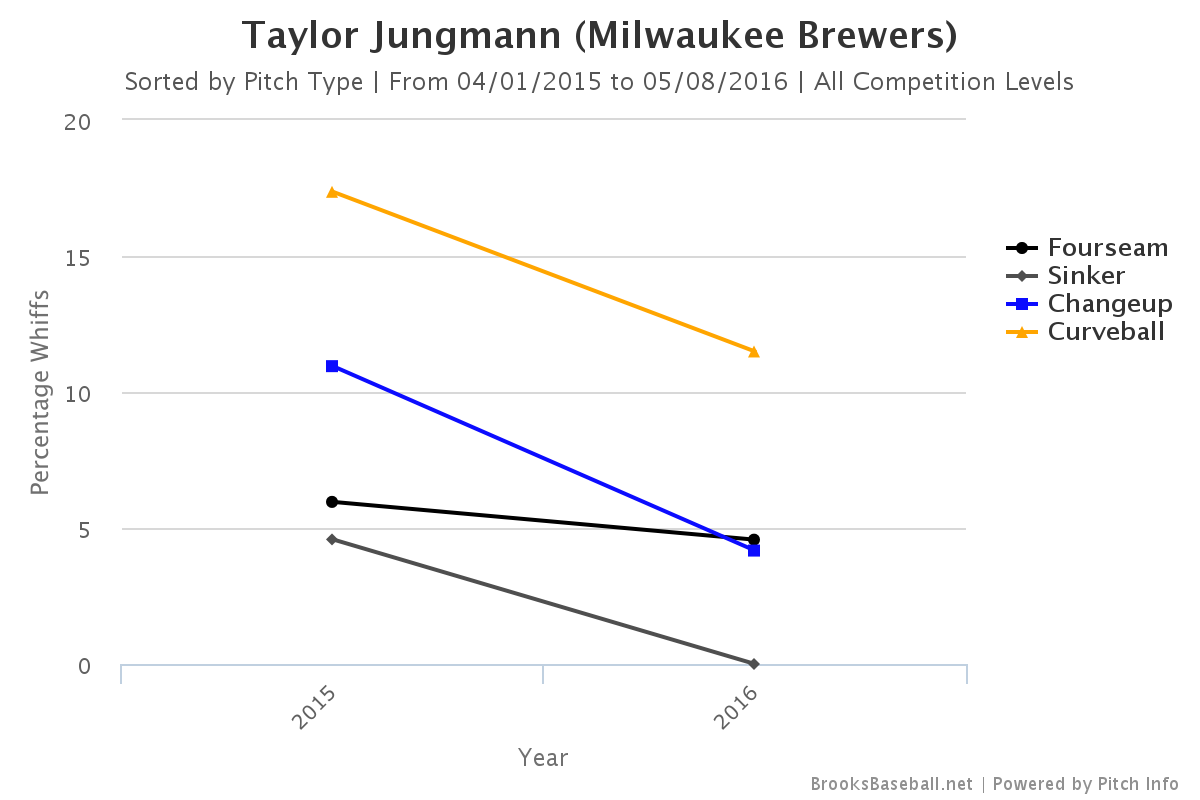 Add together all of these moving parts, and you have a walk rate that has basically doubled since Jungmann’s first month in the big leagues. That’s twice as many free baserunners–no wonder he’s struggling to keep his head above water.

Last year, Jungmann’s fastball averaged 92.59 mph on release. That’s not impressive, but it’s fast enough to get big-league hitters out. So far this year, his heater is leaving the arm at 90.25 mph instead. 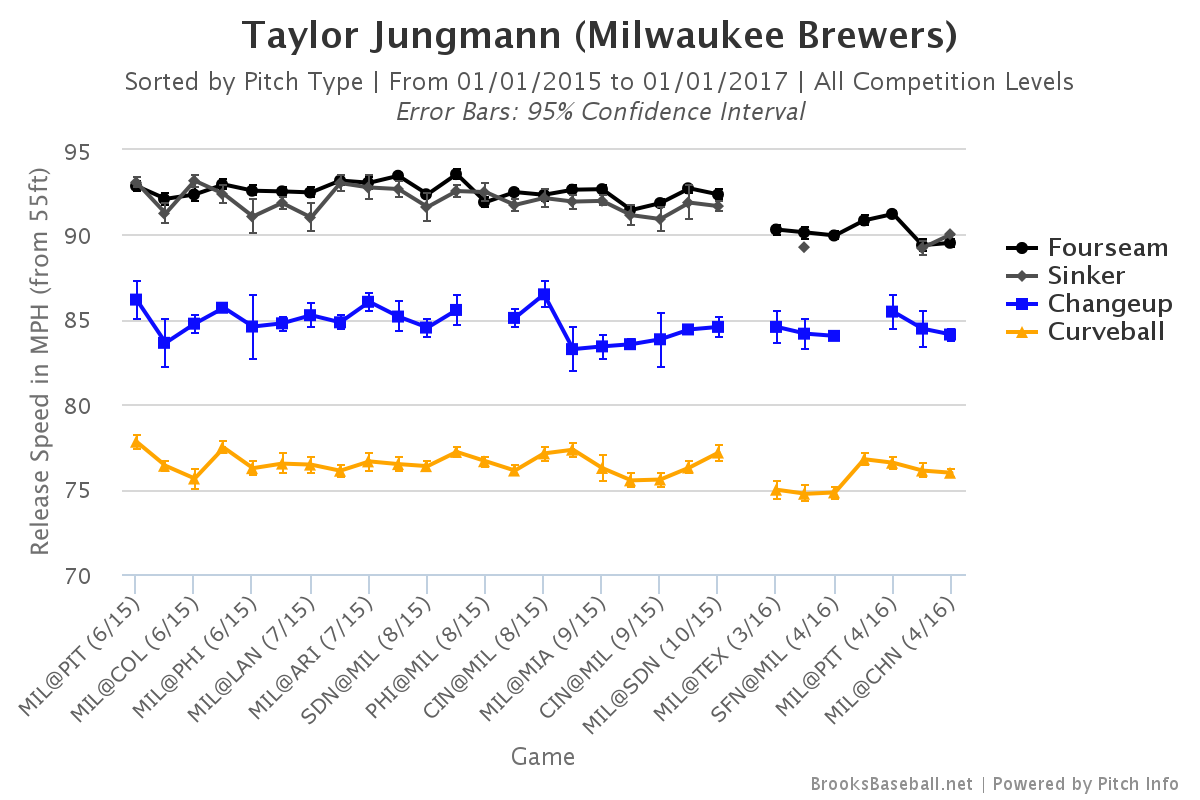 In today’s era of triple-digit burners, it’s easy to overlook the significance of this development. Slow, slower, what’s the difference, right? While it’s true that loss of velocity is a more significant issue in the upper registers of speed, it’s also worth noting that 92 to 90 is one of the biggest, most noticeable gaps we can observe in fastball effectiveness:

In summary, Jungmann’s subtle velocity backslide took him from “just fast enough to be effective” to “just slow enough to get creamed.”

A successful Major League pitcher does three things well, when you boil it down: he mixes his pitches well; he delivers offerings that are overpoweringly hard or late-breaking; and he hits the spot he’s aiming for. This year, Taylor Jungmann has been measurably worse at each of those things. The Brewers and their fans would certainly love to see him regain the form that made him one of 2015’s best feel-good stories, but in order for that to happen he will need to improve his power and command, and reintroduce his third and fourth offerings.