The Brewers did the world a favor, defeating the Cardinals 3-1 and notching another victory against the Best Team in Baseball™.

Top Play (WPA):
This was as straightforward a game as there can possibly be, at least in terms of WPA. The Brewers took the lead in the bottom of the first and were never really challenged, and this is reflected in the WPA graph and leverage index for this game. 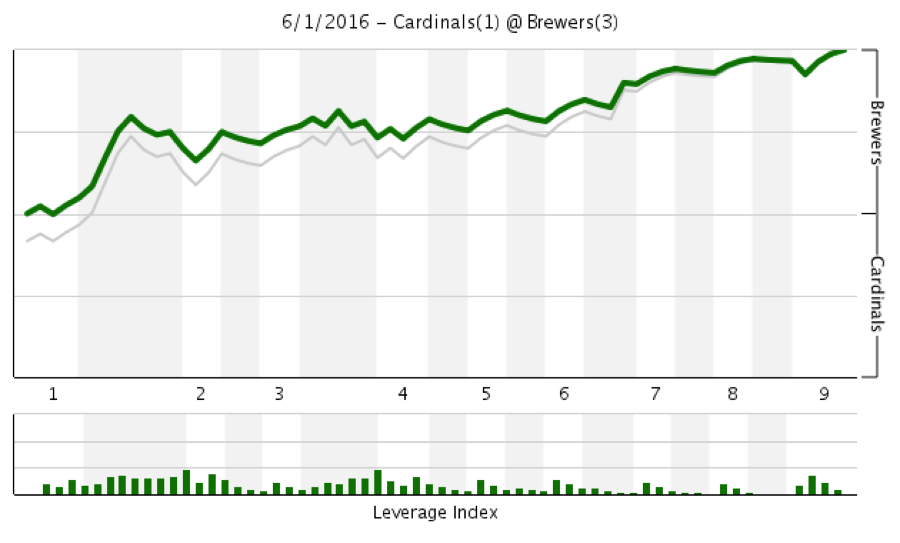 This is further reflected in the fact that neither of the most-impactful plays of the game were even one that scored a run. In fact, it was Hernan Perez’s single with no one out and Jonathan Villar on first base in the bottom of the first inning (+.087), which set the table for Ryan Braun’s RBI single that opened the game’s scoring.

Bottom Play (WPA):
The linear nature of the graph above was further evidenced by the bottom play of this game. In the bottom of the second, with the Brewers winning 2-0 and a runner on first with one out, Zach Davies got Yadier Molina to ground into a double play (-.052) that killed the rally. And by WPA, this was the Cardinals’ best chance to win after the first inning. Davies shut them down very effectively.

Key Performance:
Zach Davies was clearly the star of the game. He threw eight shutout innings and struck out nine while allowing just three baserunners (all hits). Davies had a rough start to the year, as his 5.17 DRA coming into Wednesday’s game was decidedly below-average. Additionally, for someone who was generally a ground ball pitcher throughout the minor leagues (ground ball rates above 50 percent at every stop), his 49 percent ground ball rate in the majors in 2016 looked to be a big worry.

But Wednesday was a big step in the right direction. Davies kept his pitches around the bottom of the zone, which enabled him to work efficiently and produce weakly-hit ground balls. That is where someone like Davies—who just doesn’t throw that hard—needs to live. If the young right-hander can keep his pitches this low in the strike zone on a consistent basis, he will be more successful going forward. 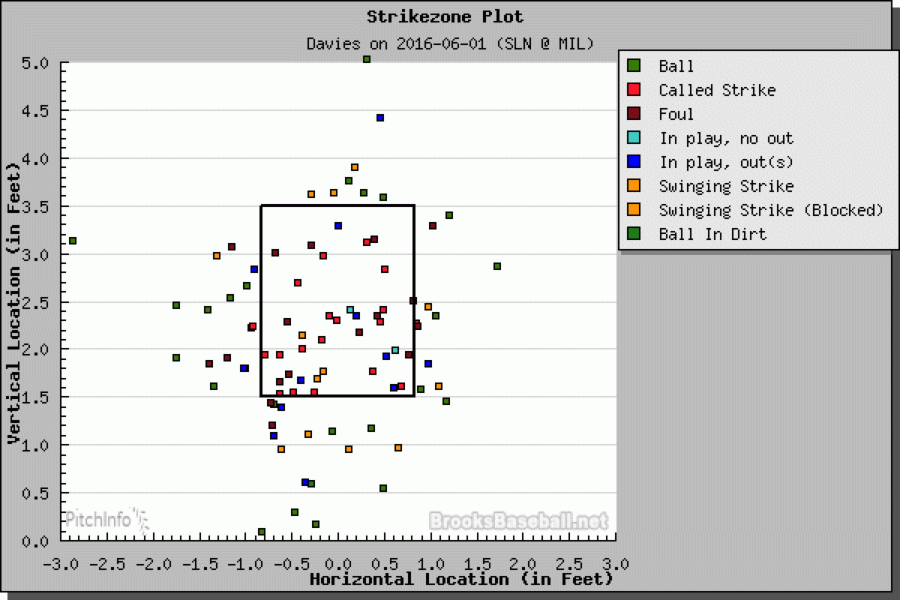 Trend to Watch:
In the last two weeks, the Brewers’ embattled rotation has actually taken a few steps forward. They remain second-to-last in all of baseball in starters’ FIP, but they rank eighteenth in the last fourteen days. This is obviously not a great rate—or even a particularly good one—but it is a tremendous improvement over 29th.

This jump is being driven by nearly every member of the rotation. Junior Guerra has obviously stood out the most, but Jimmy Nelson and Chase Anderson have demonstrated some progress, as well, and Davies obviously had an excellent start on Wednesday. Wily Peralta continues to struggle, but the steps forward by Guerra and Nelson are encouraging. As I wrote last week, the poor performance of every member of the rotation was a concern, but if a couple pitchers on the current staff develop into quality big leaguers, the organization will be in a good position.

Seth Victor
Follow @sh_vic
Seth is currently a student at UCLA School of Law. He is also a recent graduate of UC Berkeley, where he majored in Political Science and played club baseball.
read more from Seth Victor