Jimmy Nelson has had a rough overall 2016. His 112 cFIP and 5.08 DRA are the worst marks of his young career, and he has not taken the expected step forward this year. PECOTA’s pre-season 50th-percentile projection had Nelson as a 2.6 WARP pitcher, with a 4.14 DRA. He started off decently (six earned runs allowed over his first three starts), but he has struggled tremendously since and his 50th-percentile projection for the rest of the season is now just 0.8 WARP despite the fact that we are not halfway through the year.

So why, then, is he struggling? It’s not as if his stuff has declined. As you can see from the graphs below, both his horizontal and vertical movement on nearly all his pitches match his marks from last year. His velocity has also remained constant. 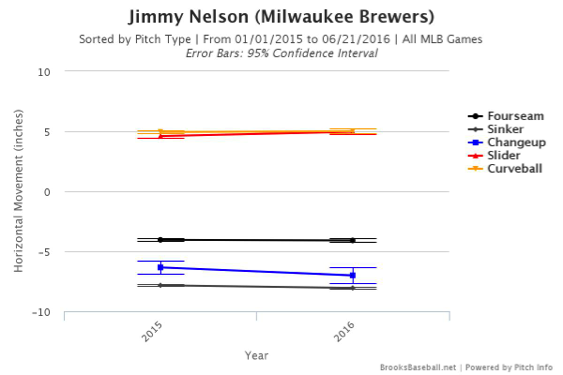 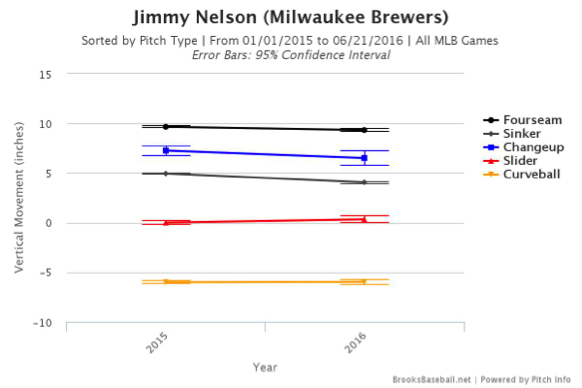 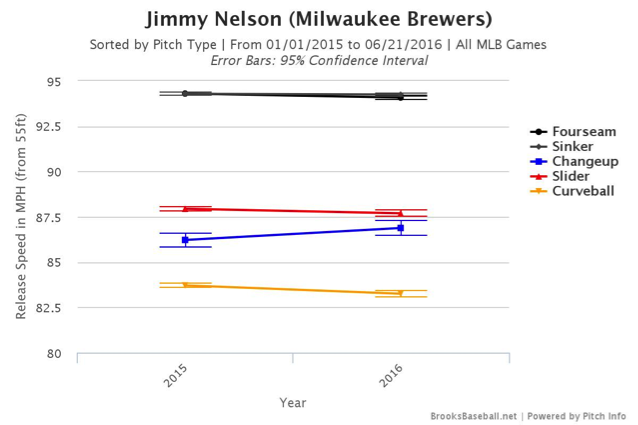 Clearly, then, the problem is not that his stuff has declined. Instead, he appears to have simply lost his command. As someone with a career ground ball rate right around fifty percent, Nelson relies on inducing soft contact. And to do that, he has to keep the ball away from the center of the strike zone. But he has not done that in 2016.

His pitches have moved up and towards the center of the zone. As the charts from above show, he has basically kept his movement and so he is not seeing his pitches flatten. He just cannot locate them. As the graph below demonstrates, each of his pitches has been higher in the zone than it was a year ago. 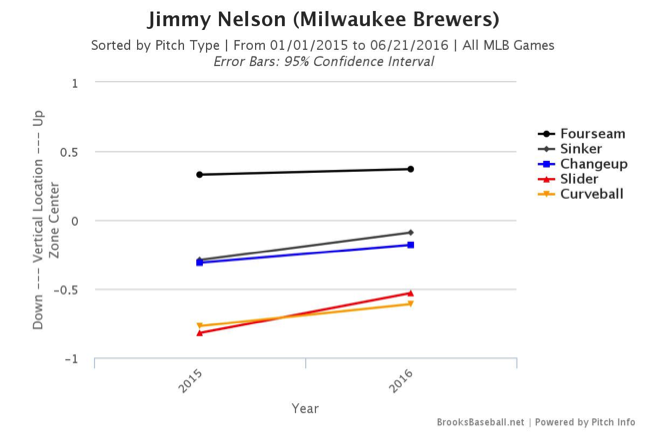 And to make matters worse, his pitches are moving towards the center of the plate as well. In 2015, his sinker and four-seam fastball were both consistently in the middle of the plate, but this was balanced out by his ability to keep his other pitches further outside. This year, though, everything is converging right down the middle. 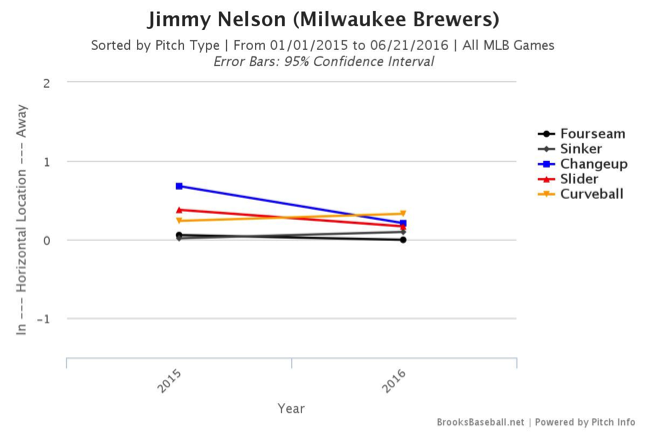 This is obviously not working. Pitchers need to be able to find the edges of the strike zone, and Nelson has not been doing that consistently enough. His pitches do remain down in the zone—he’s been more up in the zone than he was last year, but still generally low—but there’s no escaping the convergence around the center of the plate. The change in height may not have been an issue at all were it not for the lack of command as well, but the two have combined to be a problem.

We are seeing this problem manifest in his home run rate. Nelson wants to live down in the zone and keep the ball in the park, but his home run rate this year is up by nearly 50 percent (1.3 per nine innings, as opposed to 0.9 last year). He could just be getting unlucky, but more home runs allowed is an unsurprising consequence of leaving more pitches over the plate or up in the zone.

Nelson’s previous performance level is also an issue here; it’s not as if he’s regressing from some established level of excellence. Instead, he is a young pitcher who performed decently but unspectacularly, but an improvement was expected. That improvement has not come.

It is possible that there is a relatively simple fix. His release point has changed significantly in the past year, and that can impact a pitcher’s ability to locate. If the change was intentional, it has not worked. If it was not intentional, then the Brewers have something to work on. A concern, though, is that an altered release point (particularly a lower one) can be an indicator of injury. 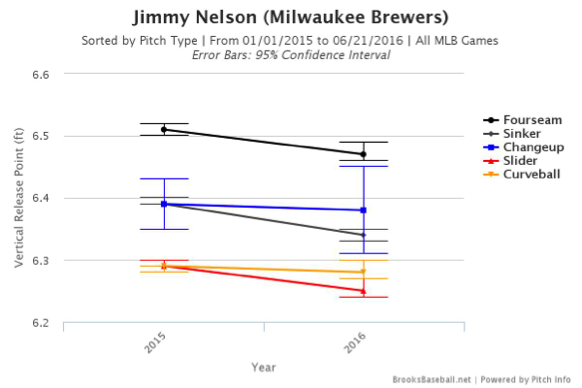 These graphics paint a worrying picture of Nelson’s performance. He is clearly struggling overall in 2016, and he isn’t just getting unlucky. Instead, his pitches just haven’t been sharp, and he has been way too consistently close to the middle of the plate. If he is going to turn his season around, he needs to locate better.

Excellent. The soft pitches- curve and change are consistent in release point, movement and speed. The hard pitches- 2 and 4 seamers and sliders are the lower arm slot offerings. Would Jimmy do this intentionally to ease arm stress? Can’t see it when he’s trying to take it to the next level. That leads to lack of command up, in and out of the zone- so yes more FIP. But old time things like ERA and W-L are decent. Hope it’s like Gallardo- he’ll snap back after a little slump.