The continued presence of Matt Garza in the Brewers rotation seems to defy explanation. The club needs to pay him this year and next, but they have no playing-time obligation. He clearly has no trade value at this point — his ERA and DRA sit at 5.03 and 5.36, respectively — so why continue to start him when Josh Hader, Brent Suter, and a host of others sit in the minors? Shouldn’t Milwaukee just give up on Garza?

In my view, that would be the wise path. I can see, however, why they might want to stick with Garza for a little while longer. He’s achieved something this year that’s without precedent for him — he’s kept the ball on the ground to an extreme degree: 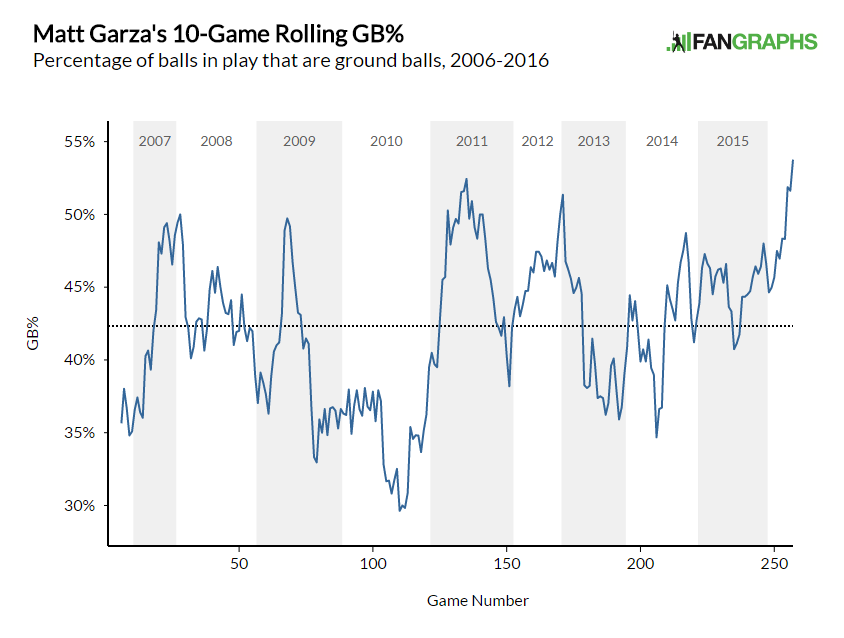 Through Garza’s first 10 starts, 53.8 percent of the balls in play against him have been grounders. As the above graph illustrates, he’s never had a ground ball rate that high over that many starts. For that matter, he’s been above 50 percent just twice — once in mid-2011, and once at the end of 2012. Garza’s batted-ball distribution has shifted pretty dramatically, and it looks like a beneficial change.

The ground ball spike appears to stem from Garza’s fastballs. Both his four-seamer and his sinker have induced high clips of grounders this year — the former at 53.8 percent, the latter at 62.5 percent. And an unsurprising move in location has sparked that: 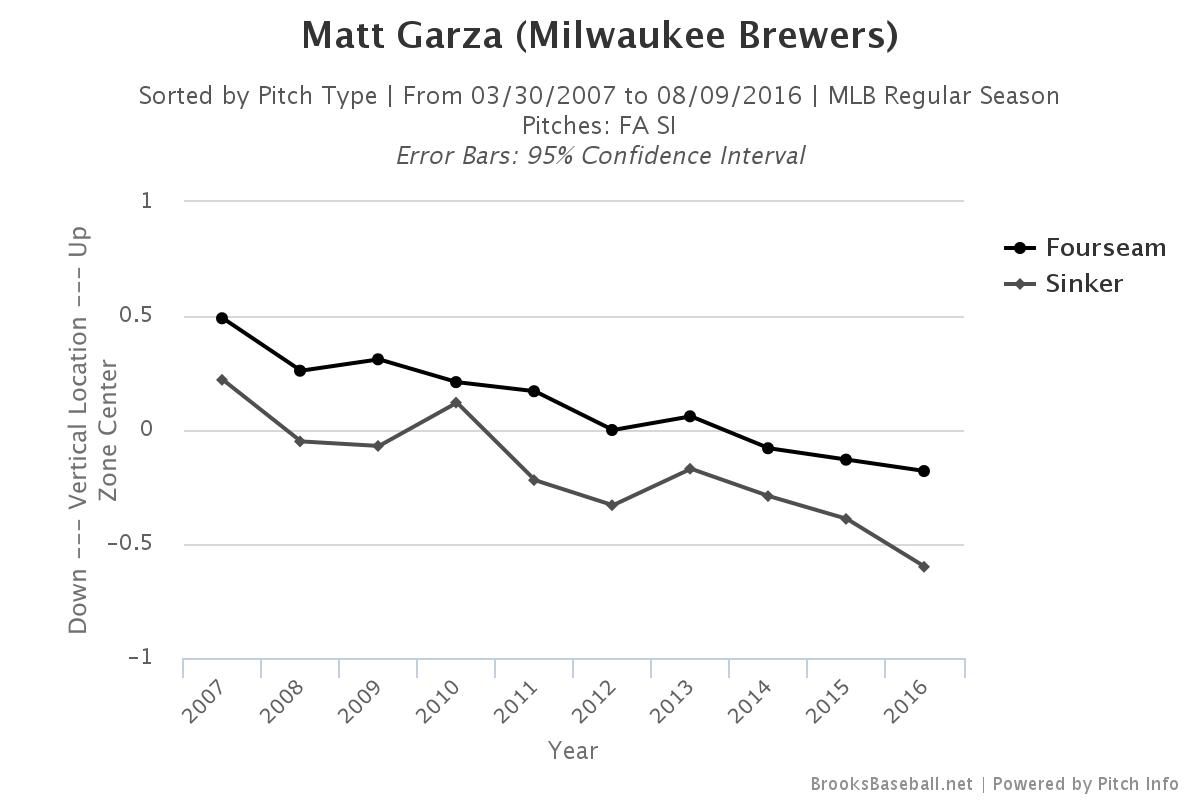 Lowering his fastballs has allowed Garza to rack up grounders, as you’d expect. That means fewer four-baggers — his home run rate has dipped to 2.4 percent in 2016 — and, with a sturdy infield defense behind him, it could lower his BABIP from its current mark of .306. Plus, since he hasn’t buried either of those pitches in the dirt, he’s thrown a decent amount of strikes and kept his free passes in check.

Now, ground balls alone won’t make a pitcher great. He’ll also need to accrue some strikeouts, which Garza has failed to do this season — his K rate of 13.1 percent is easily the worst of his career. But you can get by with mediocre performance in that regard if you cut down on baserunners and keep the ball in the yard. As Garza has lost some of the clout on his heaters, he’s evidently decided to follow this path.

For another example of this strategy in action, look at another aging Brewer who adopted it a few years back. When Yovani Gallardo saw his velocity begin to wane, he started focusing on ground balls at the expense of strikeouts. That helped him post a respectable 3.84 ERA and 4.24 DRA during his last two years in Milwaukee. While that fell short of the standard he had set prior, it still gave the Brewers a backend starter they could count on every fifth day, which is likely Garza’s ceiling at this point.

This afternoon, the Brewers will trot out Garza in the finale of their series against the Braves. If he can prevent them from putting the ball in the air, he might improve his stock over the remainder of the season. In a barren free-agent market, teams will pay a fortune for a reliable arm, which Garza and his ground balls could provide.