As the Brewers entered 2016, their rotation looked flush with young pitching talent. During 2015, Wily Peralta, Taylor Jungmann, and Jimmy Nelson all made at least 20 starts and were in their age-26 season or younger. Each had experienced some level of big league success: Peralta was coming off a disappointing 2015 season but had posted an above-average DRA- (96.9) in 2014; Jungmann had been just about league average in 2015 (103.3 DRA-); and Nelson had made 30 starts at age 26 and posted a 103 cFIP.

There were obviously some causes for concern for each member of the trio, as none of them had a season of actual excellence they could point to beyond Peralta’s five-start call-up at the end of 2012. However, they were all hovering around league average and were entering their physical prime, so hoping for some step forward was not unreasonable. As we know, though, that did not happen. In fact, not only did they not take a step forward, they were each worse.

Jungmann and Peralta were both demoted to Triple-A in the middle of the season, and Nelson made 32 big-league starts but posted a 5.71 DRA and was worth -0.7 WARP. Each of the three was nothing short of disappointing, and 2017 will be a big year for each as they try to prove they are big league pitchers.

This article will focus on Nelson. I wrote about Peralta a few times last season, and Jungmann appears to be on a different level in the organization, as he had a much shorter leash. Nelson is interesting because the club had enough faith in him to keep him in the majors all season despite his poor performance.

Nelson’s 5.71 DRA was the third-worst among all qualified MLB starters, and if he pitches that badly again he clearly will not be long for the Brewers’ rotation. The two pitchers worse than him—Jered Weaver and James Shields—have significant enough track records that they are given longer leashes. But if Nelson is one of the three worst starters in the game again, he is unlikely to be given another full season unless injuries devastate the club’s pitching depth such that there are no other viable options.

The first place to begin any analysis of a pitcher is with their numbers, and Nelson’s support someone who would have declined slightly. His 7.0 K/9 is the lowest of his career, but it is not out of character as his career mark is 7.3. His walk rate did bump up to 4.3 BB/9, and that loss of control is significant as it likely plays into the other red flag, which is his home run rate spiking from 0.9 per nine innings in 2015 to 1.3 in 2016. His contact rate and zone rate also spiked, from 77 percent and 49 percent in 2015 to 81 percent and 52 percent in 2016.

Combining these last four numbers paints a pessimistic picture. A rising walk rate, home run rate, and contact rate suggests that Nelson didn’t have a great idea of where his pitches were going. The pitches that were in the strike zone were more hittable, while when he tried to get more fine he missed his targets.

As the graph below demonstrates, velocity was not the problem. His fastball velocity has steadily declined over his career, but that is not unusual, and there wasn’t a huge drop from 2015 to 2016. 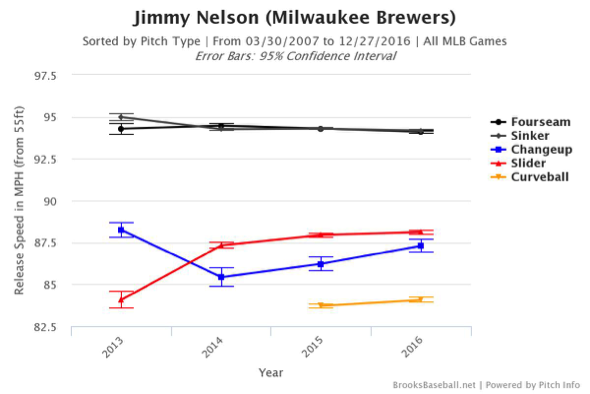 There also wasn’t a significant change in either the vertical or horizontal movement on his pitches. As the graphs below demonstrate, his 2016 marks were mostly right in line with his 2015 marks. The only significant difference was his changeup dropping more, and that could be a positive, as well-thrown changeups look like fastballs until they dive out of the path of the bat. 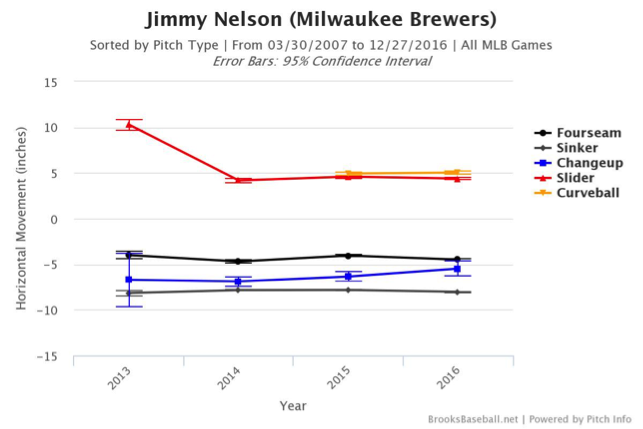 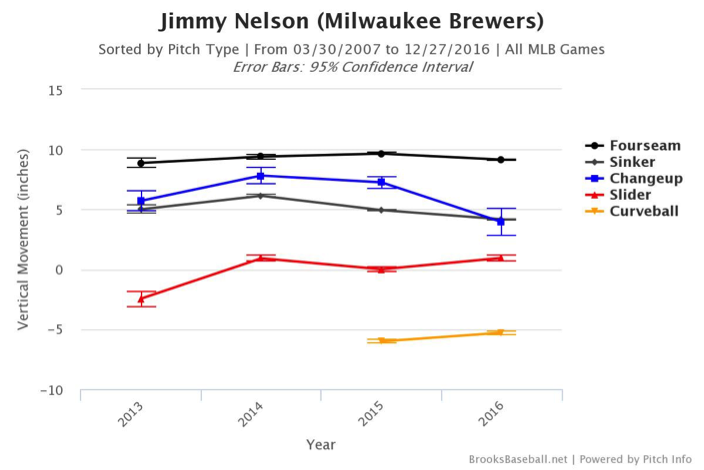 These all support the idea that something other than raw stuff is the issue here. Nelson’s pitches weren’t identifiably worse, so an alternate explanation is needed. The two graphs below show Nelson’s release point, and there is a clear trend. His vertical release point dropped from where it was in 2015, and his horizontal release point moved further away from the center, which suggests that he was dropping his arm. 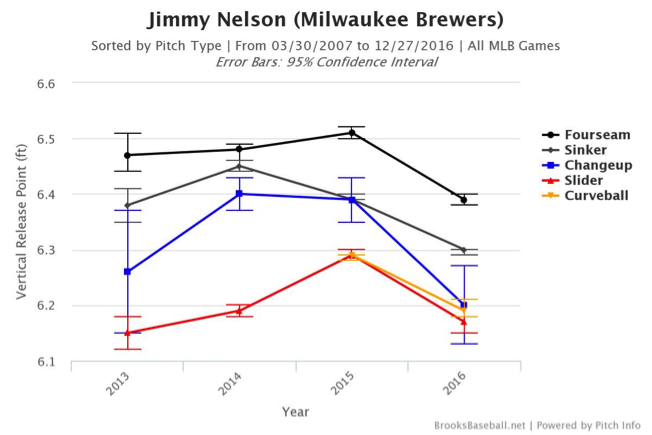 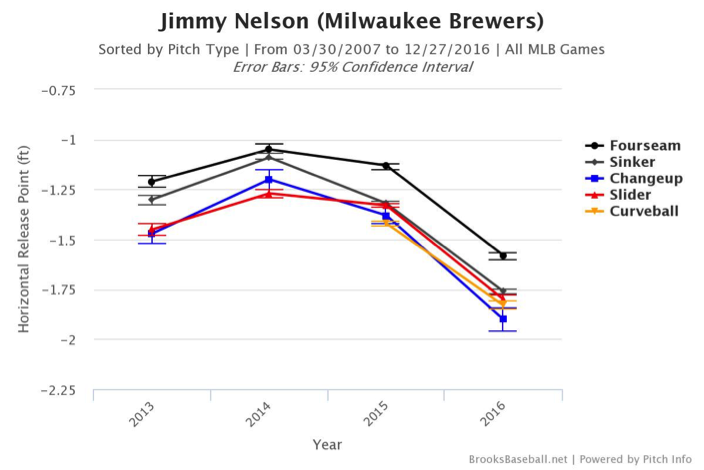 Normally when a change like this occurs, there is a corresponding increase in horizontal movement. (Extreme examples of this are sidearmers and submariners like Darren O’Day; the further down a pitcher’s arm slot is, the more horizontal movement they are able to generate. The downside is that opposite-sided hitters have an advantage because they can see the ball for longer and that some movement travels into their swing paths). However, in Nelson’s case, I did not see that, and I don’t really know why. He would have had to have changed something from the way he had pitched previously, such as grips, to negate the expected improvement.

A changing release point is relevant because it can impact command, and it seems likely that Nelson struggled with the finer points of his control last season. The fact that both his walk rate and his zone rate rose is bizarre, but can be explained by Nelson just missing some spots and not necessarily being all over the place.

In general, this is optimistic news for the Brewers because release points are fixable, and it doesn’t appear that Nelson was all over the place and with no idea where his pitches were going. Instead, small changes should work to get him back on track.

I hope his release point dropping is not a precursor to arm issues.

When I watched Jimmy last year, he would have stretches where it was easy to tell if the pitch was going to be in the zone or not. Basically, the number of ‘non-competitive’ pitches was high. Where can I find heat maps that would prove/dis-prove this observation?

I’m not sure if this is exactly what you’re looking for, but Brooks Baseball has information on grooved pitches as well as zone profiles (how often he hit each part of the strike zone).

It “felt” to me like Jimmy was up in the zone constantly, especially with his sinker. Also, his knuckle curve seemed to disappear in ’16 as opposed to ’15. Both could be the result of a lower arm slot.