If you were to ask someone how many times the Brewers pinch ran in 2016, you could win an awful lot of bar bets. You would also get a lot of strange looks, but it’s January and you’re thinking about baseball.

Glancing through The Bill James Handbook 2017, the number really stands out: Craig Counsell called for a pinch runner four times. Four. Over the course of a 162-game season, one would think that there are at least four instances of a player pulling a hamstring or twisting an ankle trying to beat out a grounder at first.

You might think that it’s a mistake, so you consult the Baseball Prospectus Manager Data Statistic Report, but there it is. Four times!

The pinch running statistic is partly surprising for the number itself, and in fact it’s the second-lowest pinch running total since play-by-play data has been available. Also, I think we tend to think of the Brewers as pretty aggressive on the basepaths. The team attempted 236 steals, which led the league by a significant margin. 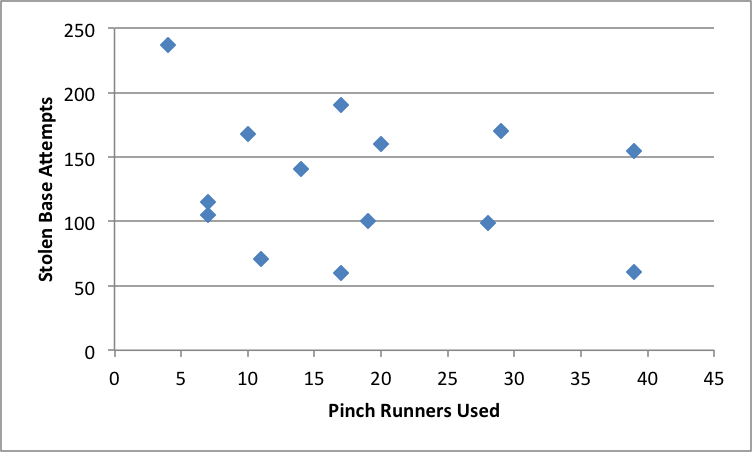 The point in the upper left corner of the above graph is the Brewers. Milwaukee was a pretty decent outlier during the season. And in fact, historically there has never been a team with more than 200 stolen base attempts that used fewer than ten pinch runners in a season until now.

So when did the Brewers pinch run, and is there anything we can learn from those appearances? I used Baseball Reference’s Play Index to find those pinch running situations, and the Game Log to determine the specifics of each:

All of the pinch running appearances seem reasonable, with two catchers removed for speedier runners, and Counsell using outfield depth and positional flexibility to keep his bench. So how to explain this historical anomaly?

First, one has to consider the team that Counsell was working with. They were fast, and almost everyone could (or at least was willing to) run, as evidenced from their league-leading stolen base attempts. The Bill James Handbook this year also includes stolen base attempt times to second base, and the Brewers had two players (Broxton and Jonathan Villar) place in the top ten in all of baseball (p. 370).

The league also certainly played a part in the relatively sparse pinch running appearances. The National League averaged 18 pinch runners this past season, while American League teams averaged 33, owing to their more flexible benches. One might also expect that pinch running appearances in the senior circuit come from pitchers who happen to find themselves on base, but the Brewers had fewer opportunities than any other team in the league (save the Reds, who were tied with the Brewers) to pinch run for their hurlers. The Crew had 15 fewer opportunities than the league average for their pitchers to jog back to the dugout and high-five their teammates. Brewer pitchers reached base just 35 times, excluding home runs.

In fairness to the hitting capabilities of the Brewers’ pitching staff, they did also see the fewest plate appearances of any team in the National League in 2016. That could also explain some of the pinch running opportunities. Craig Counsell was more aggressive in pinch hitting with his pitchers, as the Brewers were fourth overall in those appearances last year.

Still, even with those considerations we’re looking at a historically low number. Out of the 23 times a team has pinch run less than 10 times in a season, only the 2016 Brewers attempted 200 steals or more.

Interestingly, the ten fewest pinch running appearances by a team in history actually includes two other Brewer teams- in 2008 and 2009 Brewers pinch ran just seven times, respectively. Whether it be due to luck in health, more aggressive pinch hitting, the makeup of the team, or just something in Lake Michigan’s water, the Brewers have not been a pinch running team.

Whether that remains a conscientious tactical decision for the club moving forward, or just something to keep our minds occupied in January as a weird historical footnote, remains to be seen.