Confidence is key, and when discussing the intricacies and mental states of baseball players who, daily, deal with the pressures of slumps, overbearing fans, nagging injuries, and minimal relaxation time, it’s one of the most important factors to determining long-term big league success. This is why Travis Shaw, one of the Brewers’ key offseason acquisitions and the projected Opening Day third basemen, has one of the more incredible stories in baseball. Seemingly, nobody has believed in him.

Selected in the ninth round of the 2011 draft out of Kent State University, a public institution of about 40,000 students located in Kent, Ohio, he wasn’t on the top of any draft boards. But the bulky, lumbering Shaw plodded his way through the mire of minor league doubt, and a multitude of attempted position changes due concern regarding his quickness and raw speed, and emerged as the Opening Day third baseman for the 2015 Red Sox by “ninjaing” his way past the now forsaken, 95 million dollar Kung Fu Panda, Pablo Sandoval.

Red Sox beat reporter, Alex Speier of the Boston Globe, was as surprised as everyone else when he wrote his March 26th column, “There was never a point prior to last week when anyone—save perhaps for Travis Shaw himself—would have forecast that Shaw might emerge as the Red Sox Opening Day third baseman.” His choice to use the word perhaps is quite interesting since it’s almost insinuating that even Shaw didn’t believe in his own ability to anchor down the role, though he’d seemingly earned it with previous stats and a head-to-head spring training battle.

However, when the calendar turned over to June, and Shaw hit a rock bottom .214/.277/.310 with only 6 extra base knocks and .262 BABIP, the doubt crept back in. Soon, the organization made a quick trigger move to acquire the right handed hitting Aaron Hill from the Brewers on July 8th. Initially, it was a move to aid the bench, but the move morphed into a platoon due to Shaw’s struggles versus left-handed pitching. He hit a ghastly .187 in 115 plate appearances versus lefties during 2016.

That slump wasn’t out of the ordinary for Shaw in his career.  In fact, to go along with his official Baseball Reference nickname, “The Mayor of Ding Dong City,” I propose a secondary, and even more pertinent pseudonym: “The Slump King” (work in progress).

Notice the hefty drop off. It’s certainly not damming for a rookie in his first few months facing big league pitching to sputter and leave the batting circle scratching his head a time or two more than expected, and I’m not demanding, or even suggesting veteran numbers from a 25-year-old, but the problem with Shaw is that this trend continues to the point of confusion and frustration.

He starts off hot, but as soon as he gets into his first slump, he seems to alter his way of thinking to such a degree that he can no longer attain numbers comparable to his peak. For comparison, here is the same month by month comparison from other, similarly aged and experienced third basemen.

Both Bryant and Arenado were able to dig in their heels, overcome their mid-season slumps, and finish on an extremely high note.

I chose Arenado and Bryant for a variety of reasons. Firstly, they’re third basemen, they’re younger than 26, and, in further comparison to Shaw, both heavier fly ball hitters with strike out tendencies. But the main reason these two stood out, in contrast to Shaw, was because their clubs fully committed to them.

It obviously helps that their raw talent greatly surpasses Shaw, but it proves the point that young players need confidence, something the Red Sox never truly gave Shaw. In my mind, management was a bit too quick to platoon Shaw. Instead, working with him could’ve caused a second half resurgence rather than a total, and unrecoverable slump into the darkest depths of the Green Monster.

Based on his quotes, Shaw was clearly upset by the way he was treated at the end of his tenure in Beantown.

From the Boston Globe, and more specifically a piece by Peter Abraham on August 19th, Shaw said “I’m just going through a tough stretch….I’m just trying to get an opportunity…I was told [the trade for Hill] wasn’t going to change much. But obviously it did…At the time of the trade, I felt like I was hitting pretty well. They felt like they needed an improvement. I won’t say I was content, but I was pleased where I was at, then my playing time went down.”

These quotes only further prove the extreme oddity that is a baseball slump. Unlike most other sports problems, the solution is completely cerebral, and clearly, Shaw’s mind was never quite right following the lineup change.

The good news for Shaw, 2017 will provide a fresh start in a new place that is all about patience with the development of talent. This time he won’t be rushed out the door, however, he will still need to develop consistency, something easier said than done.

When looking over Shaw’s tendencies, a few things stood out. The first, and most interesting thing, is that he struggles mightily against fastballs, especially up in the zone. What that tells me is that he features a heavy uppercut swing that is too slow to the ball. That’s further evidenced by his fly ball rate of 30.2 percent, 18th highest in the MLB out of 322, whopping 25 percent strike out rate, 16th highest in the MLB among 146 qualified players, his highest percentage of HR success coming against sinking fastball’s, 1.40 percent, and two of his three highest batting averages being against change-ups and sinkers, both pitches with downward movement.   His current approach leaves a serious hole in his game, and as evidenced by the charts below, they are few key ways to attack Shaw that more or less guarantee success. He more consistently whiffs on fastballs high, and can sometimes connect lower in the zone. 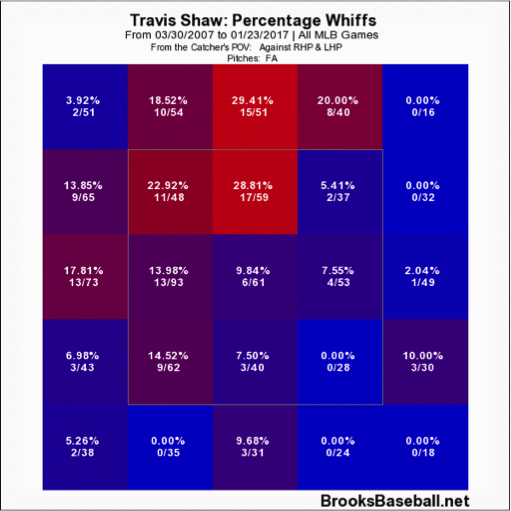 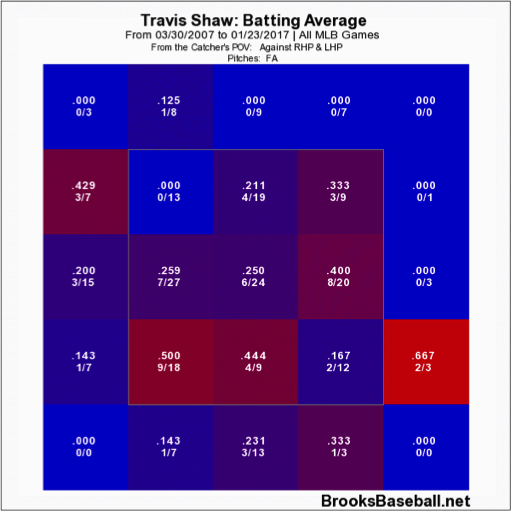 For further proof, I used Baseball Reference index to find which pitchers have had the most strikeout success against Shaw. Drew Smyly, Jake Odorizzi, and Chris Archer were tied at the top with six a piece. Unsurprisingly, all three men dominantly feature a fastball, and their fastballs all have a tendency to rise. Further, all three see their fastballs generate an above average amount of whiffs, Odorizzi an insane 12 percent, so they trust throwing them in a two strike scenarios. It makes sense that a hitter with an uppercut swing would suffer against this crew, and Shaw fits the bill.

So, the first step for Shaw in 2017 is to level out his swing, and on how to remedy this, look no further than the approach of his new teammate, Ryan Braun.

Ever since I laid eyes on it, Braun’s ground ball percentage has fascinated me. How could a legitimate slugger with a .233 ISO, 19th highest in the majors, have the 18th highest percentage of groundballs, 56.73? To get into raw numbers, of Braun’s 416 batted balls, 236 were ground balls and only 68 were fly balls. He hit 30 home runs, but, somehow, only 68 of all the balls he hit all year were classified as a fly ball.

Shaw’s problem is that fly ball hitting doesn’t fit in with his natural abilities. Examining the 17 players with a higher fly ball percentage than Shaw, most of them have one, specific thing in common: a high ISO.

The five players in bold have no business lifting the ball so frequently, and they’d be better off trying a different approach. To be a player that can live or die with the fly ball, you have to have an insane amount of strength, Davis, Bryant, or Carter style, that enables a steady diet of home runs. That’s the only way so many fly balls and a massive uppercut swing is justifiable, otherwise, a player is just hurting himself.

The Braun, ground ball style allows him to remain consistent, something Shaw is striving for. In fact, Braun rarely, legitimately slumps, and over the past 18 months of baseball, he’s only his under .250 in three months.

It might not work out for Shaw, but it’s worth a shot.

Of course, Shaw doesn’t have the raw ability, pure swing, or overall athleticism of Braun, not many have that, but Shaw can alter his approach so that he’s no longer overwhelmed by a Drew Smiyly fastball and use what power he does have more effectively. However, the overall key for Shaw this year is confidence. The Brewers need to invest for the long term in this young talent and maybe if someone, for the first time in his career, believes in Shaw, it could unlock a different, and deadly, third baseman.