Wily Peralta’s career has been wrought with inconsistency. After an encouraging first two years in Milwaukee, the electric righty has descended into discussions regarding possible assignment to the bullpen. And, even with his bounce-back 2.92 ERA in the final two months of 2016, 2017 is going to be a make or break year for his future.

It’s easy to argue that Peralta’s most insurmountable enemy has been himself. His WHIP hasn’t been lower than 1.52 since 2014 and his FIP has never been lower than 4.10 in any of his full seasons. But there is one opposing individual that enters the conversation to challenge Peralta’s internal conflict as the greatest detriment to his stat line: Cubs slugger Anthony Rizzo.

During his six year career, Rizzo has clubbed 134 home runs off 101 different pitchers. Of those 134, seven have been off of Brewers starter Wily Peralta. In an effort to make that statistic even more jarring, 5.2 percent of Rizzo’s total home runs have come off Peralta.

This success hasn’t exactly been a secret. When asked by the Chicago Tribune about his dominance of Peralta following a two home run game last September, Rizzo couldn’t quite put his finger on the source.

“I don’t know what it is,” Rizzo said. “He has really good stuff—throws really hard— I just put good swings on the balls.”

Whether Rizzo’s vague answer is an effort to hide his strategy against Peralta, dodge the question as to not offend him, dodge the media due to apathy or prior post-game plans, or simply blame luck and the oddity of baseball, I’m not sure. Regardless, since the answer seems to be a mystery, I sought to identify exactly why Rizzo feasts on Peralta. First, I had to find out Rizzo’s home run success wasn’t any kind of historical outlier.

I sampled first basemen from the last twenty years and looked up who they had the most home run success against. It turns out Rizzo and Peralta’s relationship isn’t as special as I’d hoped, with Paul Goldschmidt, Jim Thome, and Mark Teixera all having more home run success in fewer at-bats. However, Rizzo still holds the title for highest percentage of total home runs against a singular pitcher, so there’s something.

Some other interesting notes from the chart: Jim Thome hit 7 homers off Rick Reed in 2002 alone, Mark Teixera hit 4 homers during 4 at-bats in a row off of Bruce Chen, and, of the 8 pitchers to give up 3 home runs to Joey Votto, only one, Zach Grienke, has faced him more than 21 times. Three of those pitchers have faced Votto less than 10 times.

So, since it’s not historically significant dumb luck, there has to be concrete reasoning for Rizzo’s Peralta power surge. On the surface, it seems to be sinkers.

Rizzo’s dominance of specifically sinking fastballs is incredible. This is real bad news for Peralta, who, 63.6 percent of the time against lefties, throws either a sinker or sinking four-seam fastball.

However, similar to most baseball problems, it isn’t that simple. None of this explains why Jimmy Nelson, a pitcher with a similar repertoire to Peralta, has shown consistent dominance against Rizzo.

Against Nelson, Rizzo is a pedestrian 5-26, with one double, one home run, three RBI, a walk, seven strikeouts, and a .192/.214/.423 slash line. So, simply blaming the frequency of the sinker and four seam fastball with sinking tendencies— which Nelson throws 68.9 percent of the time— as the reason for Rizzo’s success is incorrect.

The main differences between the two pitchers, and their levels of success against Rizzo, are pitch variance and inward movement.

Looking at Rizzo’s numbers and heat maps, his main areas of success are hard thrown balls in the upper-inside corner, middle of the plate, and low-outside corner, as well as, breaking pitches that hang out over the middle and outside half of the zone.His main weaknesses are change of speed, fastballs up and away, and breaking pitches crashing down and in on him. 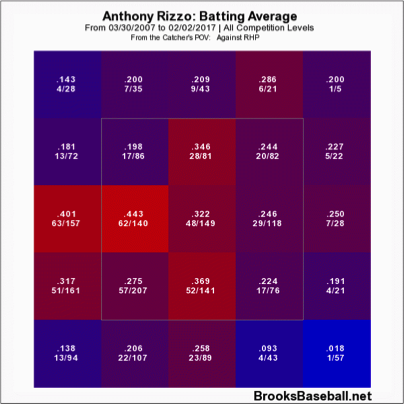 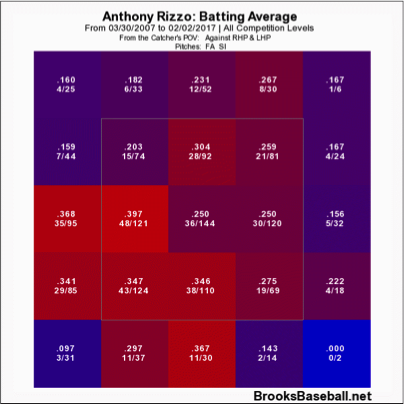 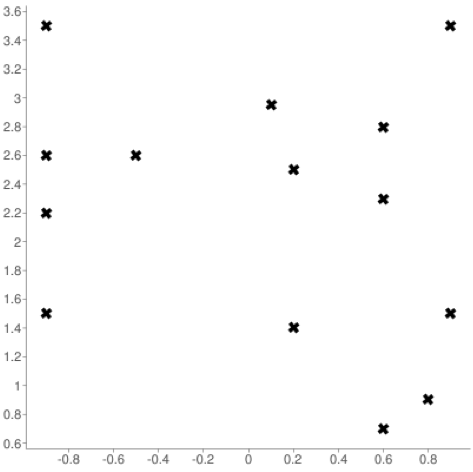 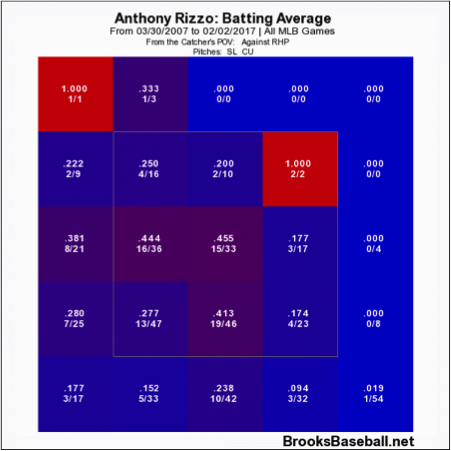 To further prove his strengths and weaknesses, I catalogued every home run and strikeout Rizzo had against Peralta. Time and again, Rizzo flourishes against tailing pitches on the outside half, breaking balls over the middle, and fastballs on the inside half. He struggles against low breaking balls cutting towards his inner half.

Peralta, due to his infrequent, non-deceptive, and overly speedy change-up, well below average slider in terms of horizontal movement, and sparse usage of high fastballs, doesn’t have a weapon that properly counters Rizzo.

Further, Peralta features minimal differentiation between his fastball and sinker as a result of velocity. His sinker, which registered at an average of 95.82 in 2016–third highest in the MLB—appears to be another variant of his fastball rather than a different pitch altogether.

Normally, this late break and ground ball forcing deception would be considered a positive aspect. However, Rizzo, who famously crowds the plate to avoid getting jammed, extends his arms for increased power potential on the outside of the zone, and has a 26 percent fly ball percentage. That is the 44th highest rate in the league and telling of a clear uppercut swing. It positively feeds his approach.

Peralta’s plan when dealing with lefties, which includes pounding the zone with sinking pitches down and away, coming across his body with an almost purely vertical breaking slider, and borderline refusing to utilize any locational creativity plays right into Rizzo’s hand, and more unfortunately for Peralta, the hands of the fans in the bleachers.

Rizzo, in turn, is able to reach out over the plate, extend his arms, get under the obviously located pitches without threat of a hard, inward slider, and consistently launch the ball into the seats. 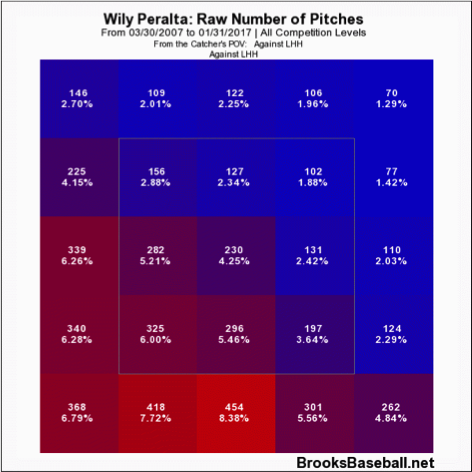 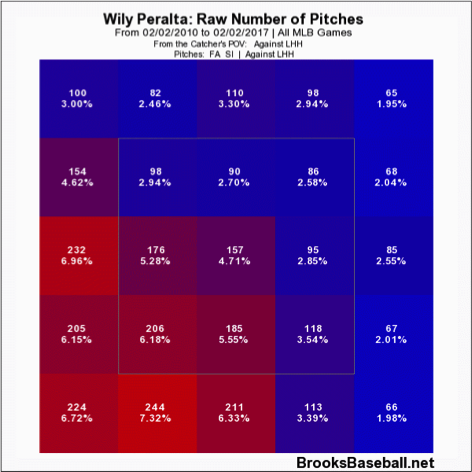 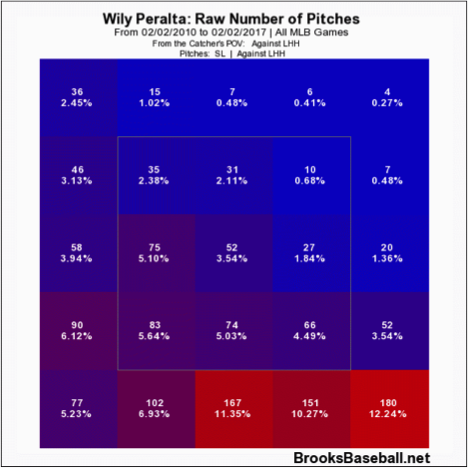 In contrast to Peralta, Nelson has three distinct weapons that aid in the demolition of Rizzo: a nasty slider, a sweeping curve, and definitively different sinker that establishes his fastball.

In 2016, Nelson featured the 17th most devastating slider in terms of horizontal movement, the 10th best sinker in terms of vertical movement, 4.16, and produced a unique brand of curveball that broke 5.03 in the horizontal direction and -5.33 vertically. He was one of only 35 starting pitchers, with a minimum 200 curveballs thrown, to have that type of action. 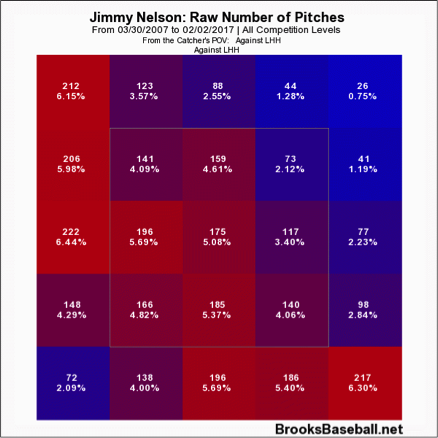 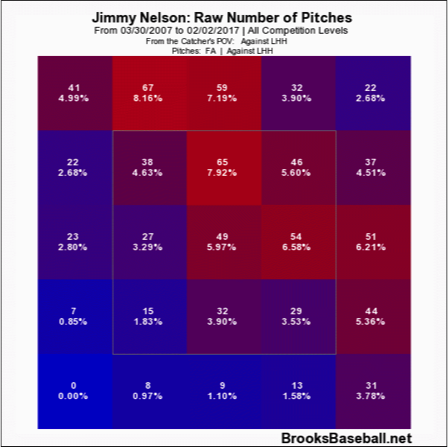 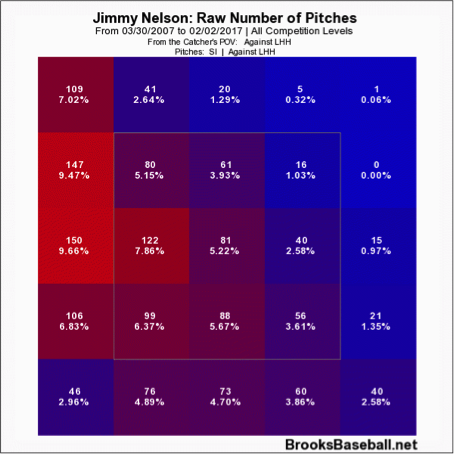 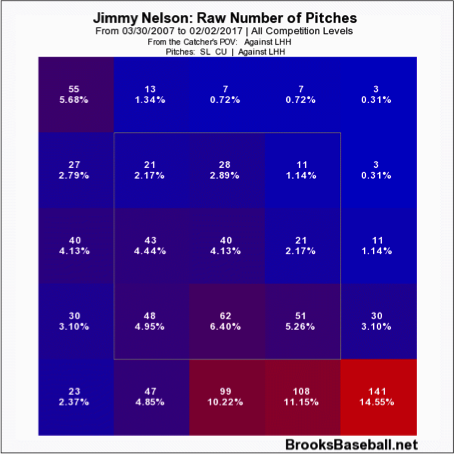 Looking at Nelson’s location tendencies versus lefties compared to Peralta’s, Nelson prefers to aggressively attack the high-outside and low-inside corners. Also, he varies location and eye level more frequently. In terms of Rizzo, Nelson’s pitch tendencies, especially the up and away sinker/fastball combination and hard breaking balls, attack his weakest points.

Nelson is to Rizzo what Rizzo is to Peralta, pure kryptonite. In fact, among the top 20 in PA against Rizzo, Nelson boats the third lowest BA, .192, and third highest strikeout total, seven.

However, Nelson’s success should be good news for Peralta because he has a pitcher on the same staff with the formula to get Rizzo out. Now, hopefully, Peralta can figure out how to do it himself.