We’re here at last. Today, Milwaukee Brewers pitchers and catchers report to camp. Among the biggest roster battles set to unfold this spring is the skirmish for space in the starting rotation. Barring catastrophe, Zach Davies and Junior Guerra are our two locks. That leaves three spots open for Wily Peralta, Chase Anderson, Matt Garza, Jimmy Nelson, Tommy Milone, Taylor Jungmann, Jorge Lopez, Josh Hader, and a slew of others to squabble over.

Each candidate deserves thoughtful consideration and analysis – and I’m sure their respective strengths and weaknesses will be duly scrutinized by my colleagues on this site in the weeks to come. I’ll kick things off with a closer look Wily Peralta.

Since his dazzling 29-inning debut in 2012, Peralta has teeter-tottered his way through four maddeningly inconsistent seasons. At times, he’s looked the part of an above-average starter, particularly in a solid 2014 campaign that saw him post a 3.62 DRA and 3.0 WARP across 32 starts. Other stretches have seen him mired in deep funks. His injury-shortened 2015 was particularly grim, as he limped his way to a 5.99 DRA and -1.2 WARP. Nonetheless, he possesses elite velocity and has posted consistently above-average groundball rates throughout his career (though his even 50% in 2016 was a career-low). There’s plenty there for a fan – or a front office – to dream on.

To wit, Peralta was given the ball on Opening Day last season. Here was an opportunity to put 2015 behind him and once again endear himself to the Brewers faithful. He responded by coughing up four earned runs in four innings on his way to a 6.68 ERA in the season’s first half. In mid-June, he was demoted to the moonshot launching pad that is Triple-A Colorado Springs, where he worked to an abysmal 6.31 ERA. Just when it appeared all hope was lost, he was recalled to Milwaukee to sub in for an injured Junior Guerra on August 8. He rebounded to a 2.92 ERA and a glittering 3.19 K:BB ratio in 10 second-half starts.

All of which is to say that Wily Peralta comes into the 2017 season with an enormous question mark hanging over his head. Can he recapture his mid-rotation form and rebound from an ugly two seasons? Or will another year of mediocrity cement his status as a marginal back-of-the-rotation arm that might be better suited to long relief?

My advice? Curb whatever moderate enthusiasm you’ve managed to muster. Peralta simply doesn’t have the tools to sustain his second-half success in the starting rotation.

Last week, Nathan DeSutter examined the peculiar extent to which Anthony Rizzo has antagonized Peralta throughout his career. DeSutter singles out Peralta’s sinker as a particular problem. Rizzo destroys sinking fastballs, and Peralta’s tendency to pound his sinker down and away to lefties plays right into the hands of the Chicago star. DeSutter was too polite to point that there’s another problem with Wily’s sinker: It’s simply an awful pitch in general.

This is not a controversial statement. Peralta’s sinker – classified by Fangraphs as a two-seamer – has never produced positive value outside of his brief run at the end of 2012. It bottomed out last year at -8.3 runs. Nonetheless, Wily reached for his sinker 859 times per Brooks Baseball, accounting for 40.40 percent of all pitches thrown. Hitters around the league rejoiced to a .345 batting average and .511 slugging percentage against, while only whiffing 7.10 percent of the time. Despite eye-popping 95.31 mph heat, the pitch simply doesn’t fool anyone. 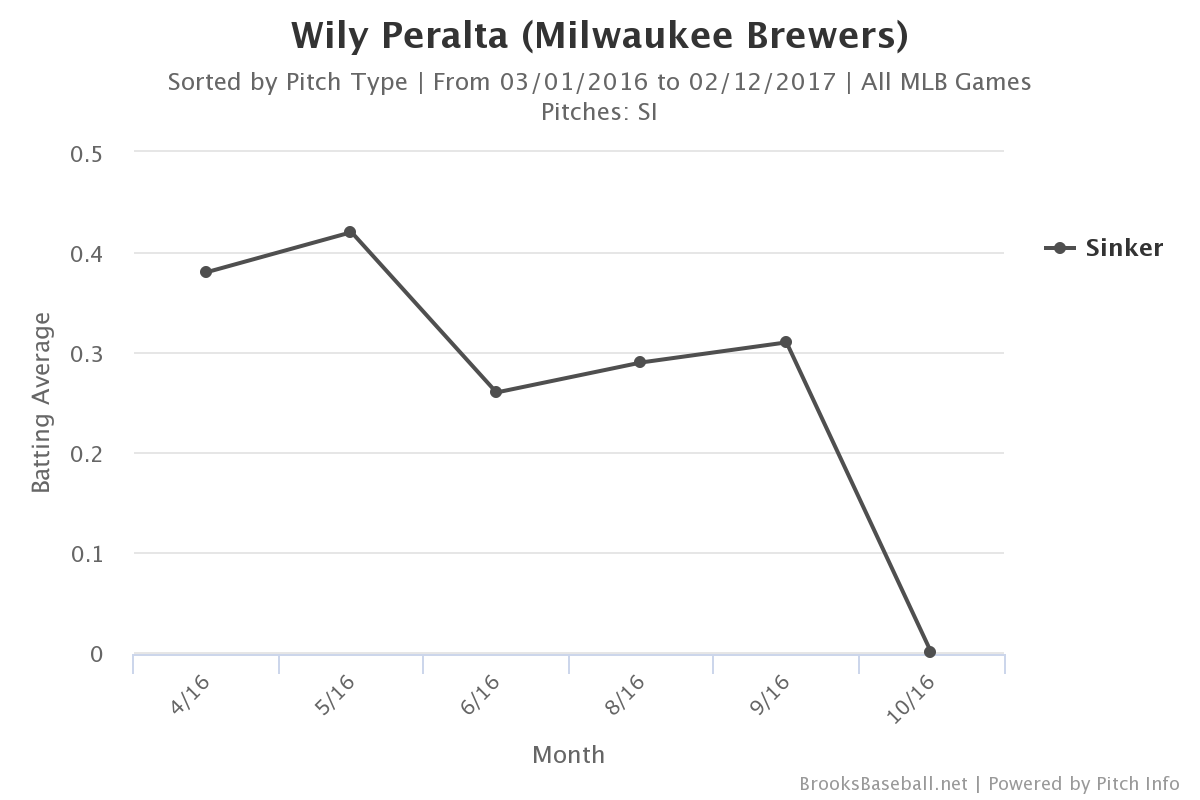 Batters hit the pitch for a .260 average or better every month of the season, aside from one 85-pitch start in October in which Peralta held the Colorado Rockies hitless while offering the sinker ten times. A month prior, the Cubs and Reds lit it up for a .308 batting average against.

When Peralta’s not throwing his sinker, he frequently turns to his four-seam fastball – he threw it 473 times (22.25 percent) in 2016. This pitch, too, has great velocity – its average of 95.29 mph is nearly identical to that of the sinker. But that may actually be part of the problem. Neither pitch boasts much movement, and they tend to bend in similar ways. As a result, Peralta’s four-seamer was worth -5.2 runs in 2016, and was consistently hit for high averages. Opposing batters can sit on 95 mph heat, knowing that’s just what they’ll get over 60 percent of the time. 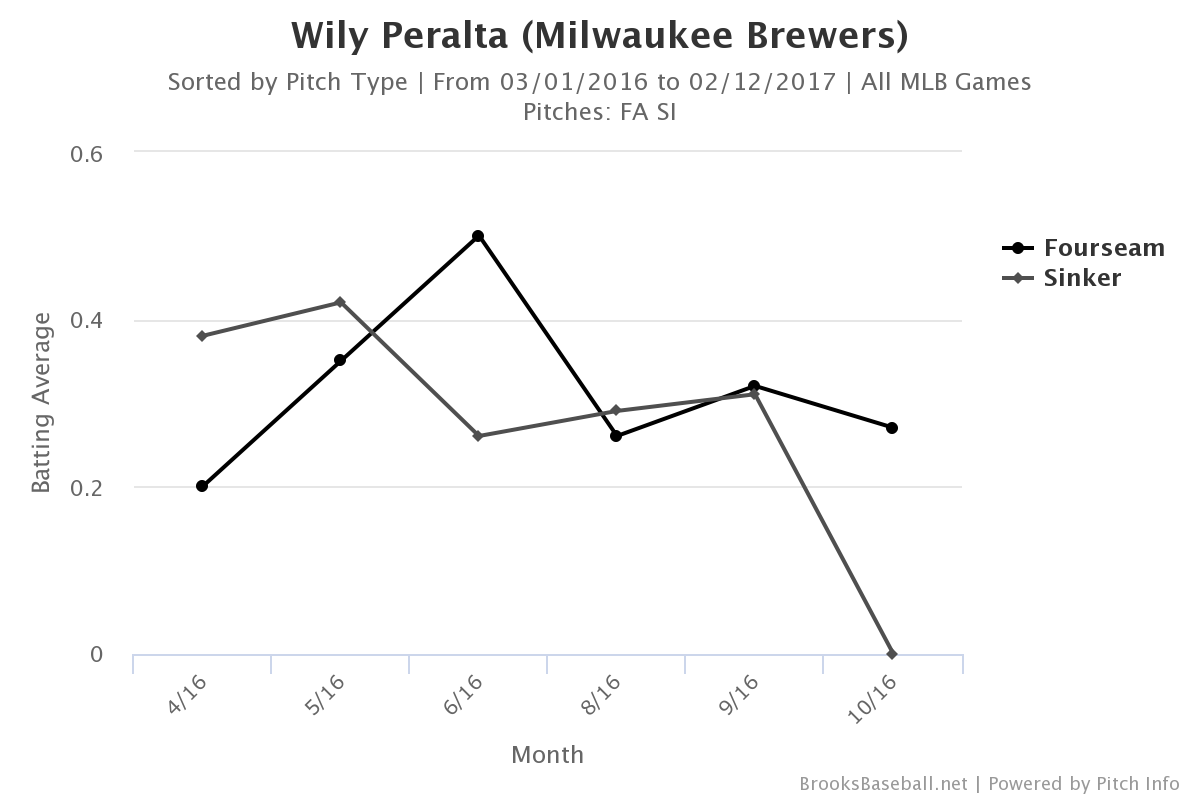 What of the other 40 percent? Peralta’s slider provides a slim amount of hope. Long thought of as a plus pitch, Peralta’s 85.1 mph breaking ball produced negative value for the second year in a row in 2016 – but only just. In all, the pitch was worth -0.2 runs, and he threw it 689 times (32.41% of all pitches). “Plus” may be charitable at this point, but that’s certainly passable – and there’s hope that it can produce more value going forward. Peralta’s slider yielded positive value from 2012-2014, and it may still be effective enough to neutralize opposing batters. After struggling with the pitch early on in the season, Peralta never let the opposition bat higher than .170 on the slider after he returned form his banishment to Colorado Springs. 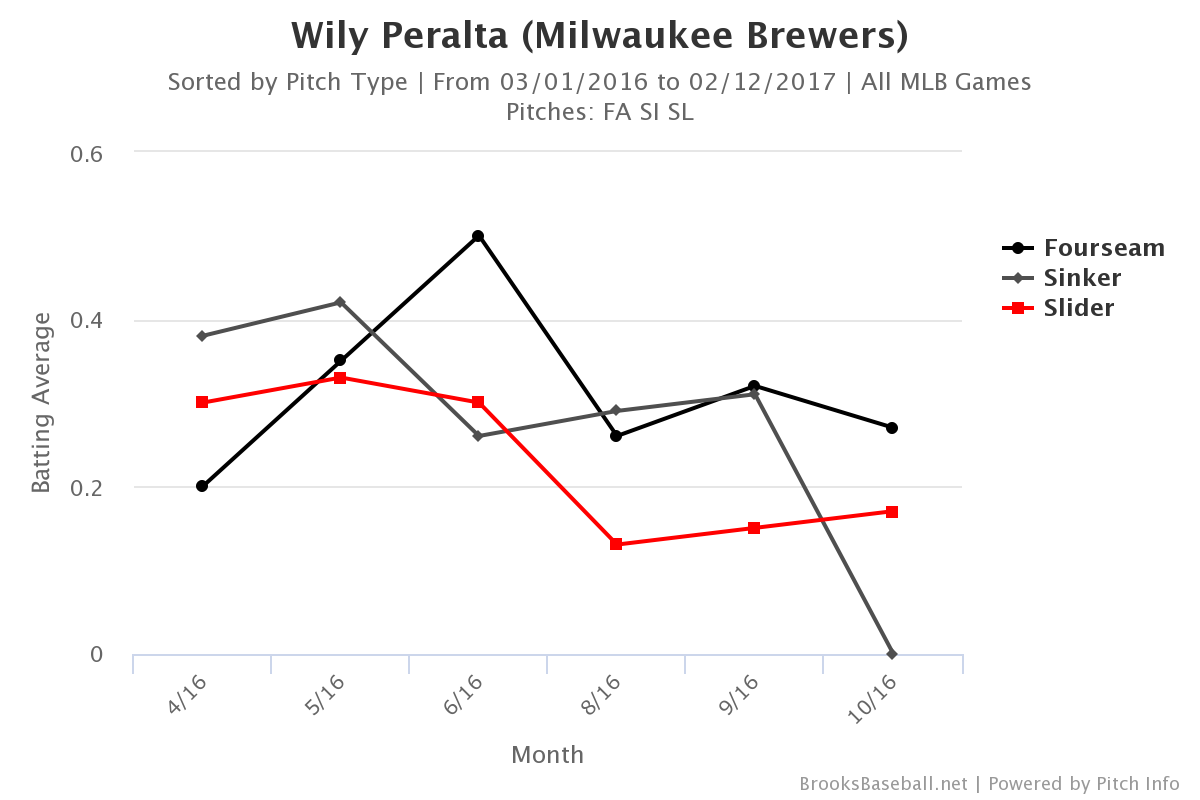 Rounding out Peralta’s mix is his changeup, an afterthought if ever there was one. Wily threw just 102 changeups last season, and they were worth -4.7 runs all on their own. Never a great pitch, the change did produce positive value as recently as 2015. But the point is moot ­– Peralta doesn’t trust it, evidenced by the fact that it only accounted for 4.80 percent of his 2016 pitches. Problematically, he’s never been able to throw his change below 84 mph, a velocity eerily similar to that of his slider. 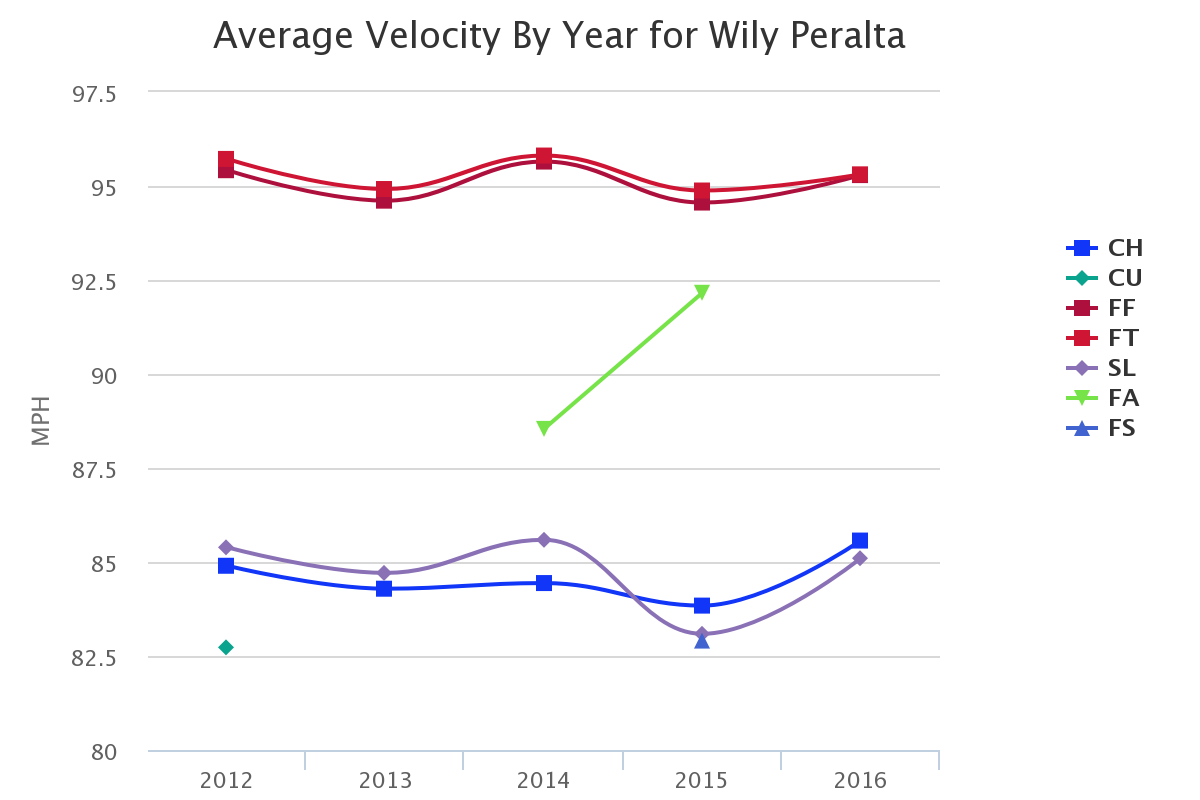 So preparing for an at-bat against Peralta is actually fairly easy. You can count on seeing some straight heat at 95 mph. If that doesn’t appeal, you know you won’t see anything slower than 84 or 85 mph. The slider has the potential to fool you. But the changeup? 2016 hitters loved that changeup, outside of a 23-pitch sample in June and August. 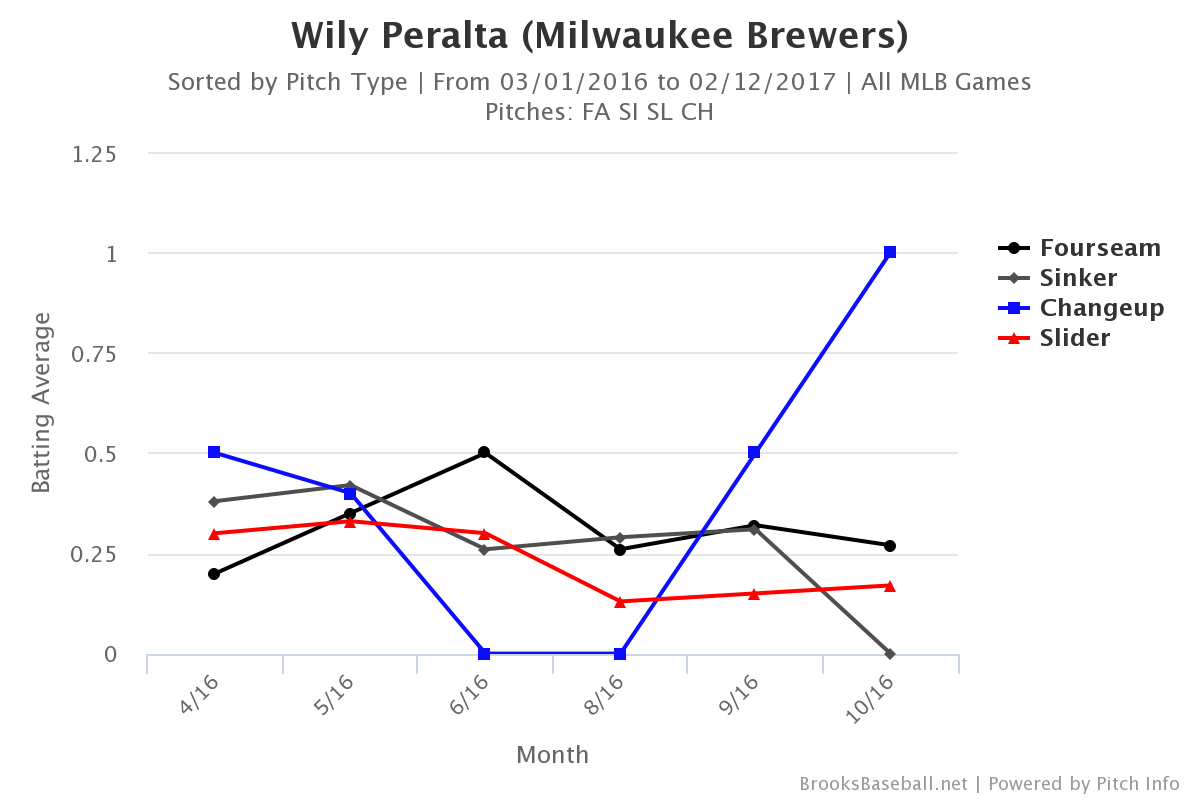 Velocity can only carry a pitcher so far, and Wily Peralta is living proof. With just one pitch that has the chance to be above average, his days as a mainstay of the starting rotation could well be numbered.

That’s not to say he can’t still be a useful pitcher. The Brewers may be wisest to limit Peralta to two pitches – say the four-seam fastball and the slider – and deploy him out of the bullpen, where the 10-mph differential between the two pitches could play up. But I expect this to be a measure of last resort. Peralta showed just enough in the second half of 2016 to warrant a final look in the starting five. And because hope springs eternal in baseball – especially in February – I’ll wrap up with a small dose of mild optimism. The righty may finally be learning to play to his strengths. Consider his 2016 pitch usage by month. 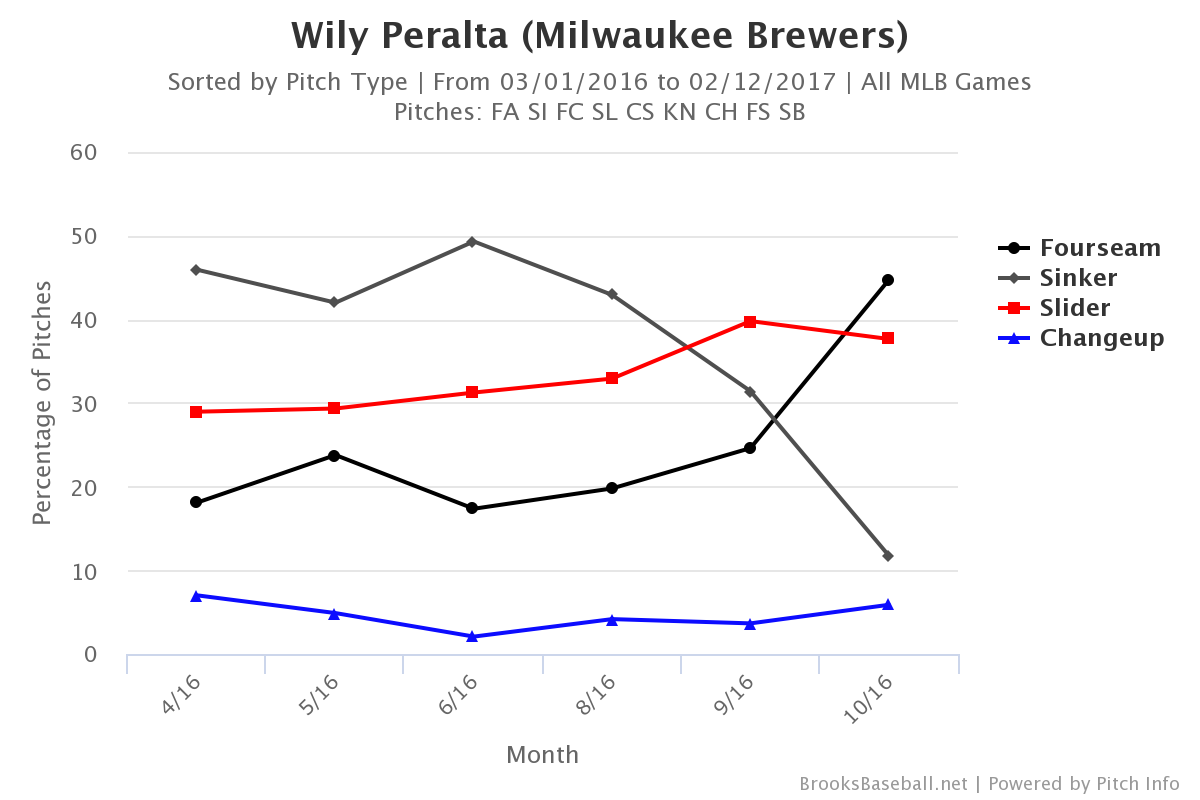 From August on, Peralta leaned on his woeful sinker less and less, mixing in more of his four-seam fastball to offset the loss. He threw his slider more, too, knowing that it was producing the best results. And he was even convinced to dabble a bit more with his changeup, perhaps in the hope that it could recapture its 2015 form.

I’m not sure that these trends will continue into 2017, and even if they do I wouldn’t expect a notably above-average season. But I’d love for Peralta to prove me wrong.

Tags: 2017 Brewers, Wily Peralta |
Noah Nofz
Follow @https://twitter.com/NoahNofz
Noah grew up in Wisconsin listening to Bob Uecker, but he currently lives in Houston, Texas. He spends his time reading, writing, and thinking about Brewers baseball, often in a nest of cats.
read more from Noah Nofz