The Brewers’ starting rotation is set up pretty ideally for the piggyback rotation. As it turns out, the bullpen is a pretty snug fit for the unique responsibilities that would come with such a setup, too. Keeping this in mind, let’s take a look at some of Milwaukee’s 2017 bullpen arms, and raise the question of whether or not they could adapt to such a system.

Neftali Feliz was arguably once baseball’s most promising young relief pitcher. Yet, he also worked as a starting pitching prospect, and he didn’t look bad during his seven-outing audition as a starter five years ago. Despite his Tommy John surgery, I’m far from worried about him having the stamina to close in a short bullpen that might require an occasional two-inning save. His command isn’t exactly ideal for what we want, but it could certainly be argued that he brings enough in terms of swing-and-miss potential to mitigate that shortcoming. While his splits point towards an affinity for the lefty-on-left matchup, Feliz is certainly capable of retiring batters of either handedness: 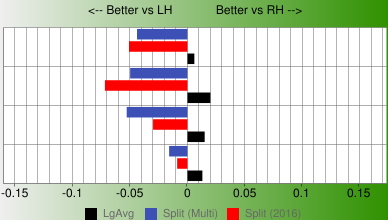 The “ideal” piggyback reliever might have a slightly different profile than Feliz, but no ideal bullpen would contain a series of identical clones. While Feliz might not fit the ideal profile, he’s certainly an idealistic fireballing closer for a piggyback bullpen. Pittsburgh pitching coach Ray Searage is famous for reviving careers. As JA Happ’s 20-win season for Toronto last year proved, those gains that Searage’s students make under his tutelage don’t disappear when they move on to a new job. Whatever Searage did with Feliz last year, it resulted in him throwing harder than he had since the Tommy John surgery: 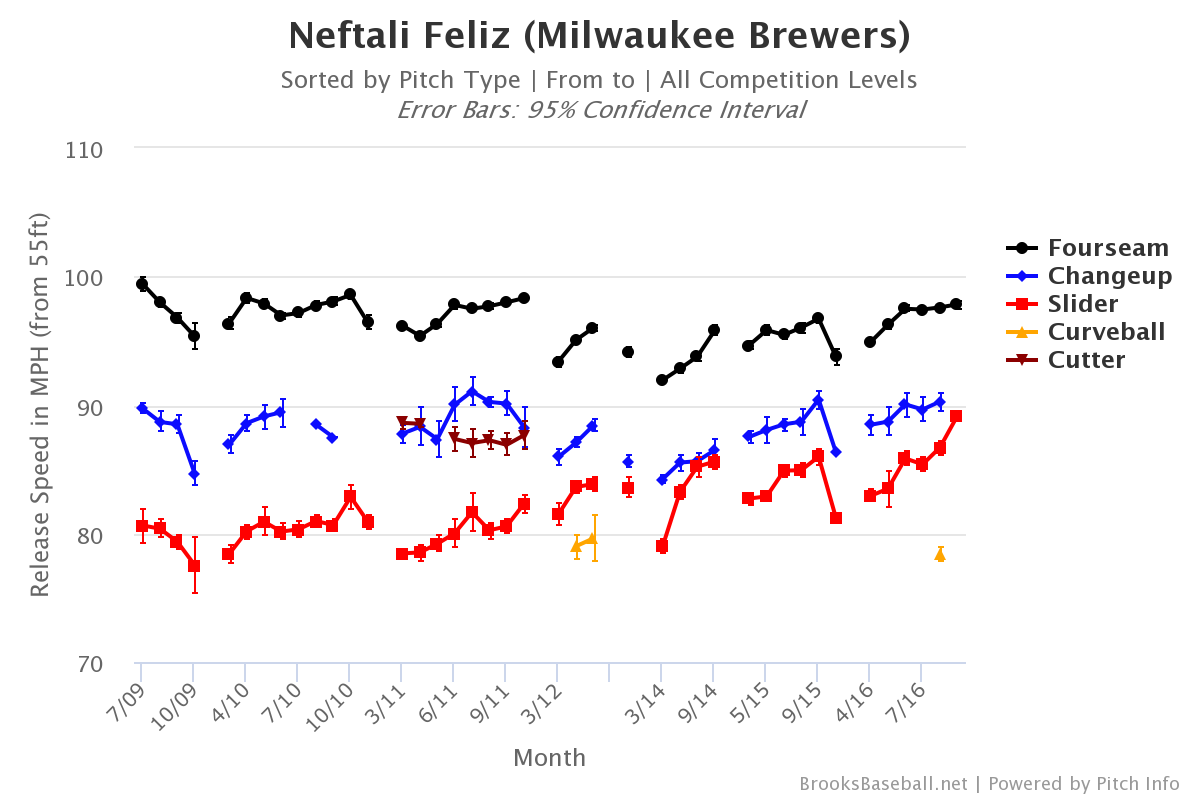 Carlos Torres, a holdover from last year’s bullpen, has very quietly produced 3.5 wins over the past four seasons. He’s made 16 career starts, maintained a walk rate of 3.5 or lower for those four years running, and his 82.3 innings in 72 appearances for the Brewers last year shows that he’s not afraid to go beyond the one inning. The 2016 BP Annual described Torres as “a rubber-armed righty with stable career splits, and he can go multiple innings if needed.” Holy crap, that’s our guy! That is, to an almost comic extent, EXACTLY the profile we’re looking for! Admittedly, Torres is the base model version of the profile, stripped down to nothing but the essentials. But at just north of $2 million a year, Torres is a great value to do the job we’re seeking each of these bullpen arms to do. Furthermore, while he’s 34 years old this season, he has just under 1,300 professional innings on his arm. It’s not absurd to see him doing what he does for years to come.

Corey Knebel is a bona-fide big-league reliever. His elite fastball-curveball combination earned him 10.5 K/9 through 91 big-league appearances, he just turned 25 this past off-season, and he’s been worth 1.2 wins as a Brewer the past two seasons. But for our intents and purposes, his best value might be as a trade chip. Knebel has never averaged much more than an inning per appearance as a professional, has been primarily a one-inning-at-most reliever since he was a Texas Longhorn, and an outsize amount of his value comes from his ability to attack left-handed hitters: 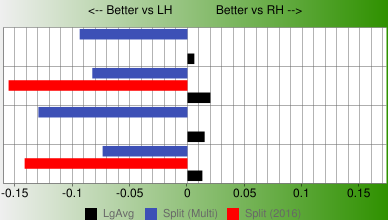 Furthermore, Knebel’s 2016 season saw his walk rate jump to 4.4 per nine innings, which is about the territory where you’ll see a guy get called “wild.” It’s not that he’s a bad pitcher–it’s just that he’s far more valuable to a team throwing a traditional five-man rotation, with a deep bullpen, that can use him as a lefty-killer. If the Brewers trade Knebel during spring training, particularly for a reliever with a profile more fitting for a piggyback staff, that might be a sign that this idea has graduated from speculation to an actual experiment.

Michael Blazek is a curious case. The 2015 version of him looks as ideally-suited for this type of bullpen as Carlos Torres: 55.7 innings in 45 appearances, less than three walks per nine, and platoon splits that are hardly crippling: 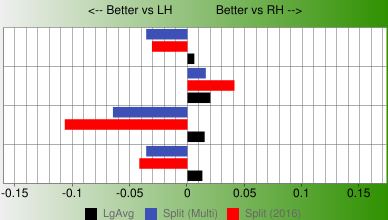 But his 2016, Blazek’s walk rate spiked to 5.9 per nine innings. That’s borderline unacceptable in a regular bullpen, and would be a devastating albatross to hang on a five-man unit. A look into Blazek’s release point data paints an ugly picture for his future: he’s all over the place, and has been his entire big-league career:

This tells us that, barring some sort of mechanical change, Blazek is always going to be prone to fits of wildness. When you’re dealing with a sample size of fewer than 60 innings, as with both of the previous two seasons, it’s not uncommon to see extreme variance like that. Digging deeper, going back through his minor league career, we see more of the same. Some seasons, he hit the strike zone pretty often. Some seasons, he fell into a funk and couldn’t get out: 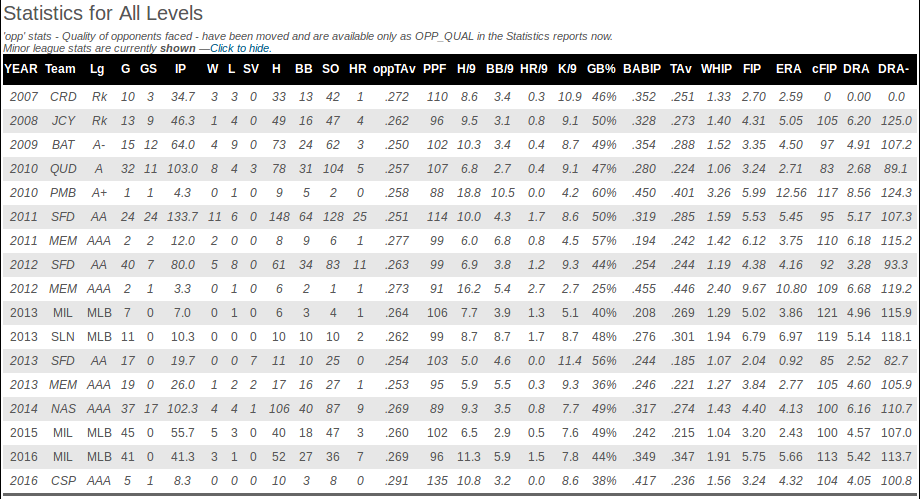 Jhan Marinez, on the other hand, looks like an even more shrewd waiver pickup in light of this revolutionary new roster strategy. Acquired for next to nothing after Tampa designated him for assignment in May, Marinez tossed 58.7  innings in just 43 appearances, posting a 3.22 ERA and 1.38 WHIP. DRA thinks he’s due for regression, as his 4.47 mark with Milwaukee wasn’t much better than his career 4.58 tally, but he’s still got everything we’re looking for in a short bullpen arm. Specifically, command was an issue earlier in his career, but since 2015 he’s been at a walk rate of 3.5 or lower at every stop he threw more than 10 innings. His splits also shine: 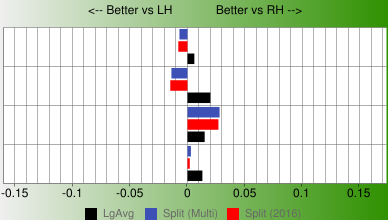 Joba Chamberlain, like Marinez, was once an oxymoronic “relief pitching prospect.” PECOTA projects that Chamberlain will eat 53 innings for the Brewers in 2017, but if they go with a piggyback rotation and a smaller bullpen he would probably be one of the first casualties. He’s still got a mid-90s fastball and the corkscrew slider, but he’s been nothing but inconsistent since he debuted a decade ago. Chamberlain circa 2014 walked just 3.4 batters per nine innings, whereas the 2016 version issued 5.0 free passes per nine. He’s got no heavy platoon splits, but he’s been a one-inning-or-fewer guy for over half a decade, raising questions of how he’d respond to a deeper workload. He may or may not handle it, but we know Marinez and Torres can handle it because they’ve done it recently.

Ultimately, handing Chamberlain a minor-league contract this offseason was still a good move. Once you show a skill, you own it, and Chamberlain has shown the ability to be an effective relief pitcher. The presence of Feliz, Torres, and Marinez limits him to a lower-leverage role, which is essential with his unreliability. But could the Brewers survive with him as one of your back-end relievers? I think so.

Brent Suter and Jacob Barnes could, in theory, join Feliz, Torres, and Marinez to complement the piggyback rotation perfectly, though starting the season with both on the roster might be playing with fire. Jacob Barnes was primarily a one-inning guy for the Brewers last season, but that was not the case before his June call-up, as he threw 22.3 innings in 17 appearances. Back in 2015, in fact, Barnes threw 75 innings in 39 appearances for Biloxi. This sets him apart from Corey Knebel for our purposes. Barnes has shown that he can work multiple innings and still be effective. His platoon splits, on the other hand, are absolutely garish: 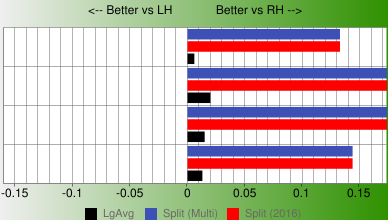 Brent Suter has a lot in common with Barnes when evaluating them for this kind of bullpen. They’re not exactly the same player, though; Suter came through the system as a starter, and has just started transitioning into more of a swingman role over the past two seasons. He’d be a longshot to make a piggyback rotation, but his stamina and control are precisely what we’re looking for to round out the back end of this bullpen. Suter walked just 1.1 batters per nine in 110.3 innings for Colorado Springs last year. Like Barnes, he shares the same ineffectiveness against lefties, and also like Barnes, this is a bias based on less than thirty innings of actual evidence.

Neftali Feliz, Carlos Torres, and Jhan Marinez are all capable of being high-usage multi-inning workhorses without risking too many blowups, Barnes and Suter could fit that same mold if they can get lefties out, and even Chamberlain could be of service if he can still work beyond the single inning and keep his walks under control. Plus, those last two spots could be improved instantly through the tried and true waiver-trolling that the Brewers have made standard operating procedure under this regime. Before the Brewers hired him, general manager David Stearns worked for the Houston Astros, who were the first team to institute a piggyback rotation throughout their entire minor-league system. This year, with the personnel setup that the Brewers’ franchise has, it would make sense for him to take that revolutionary idea one step further and piggyback the Brewers’ Major League pitchers.

Colin Anderle
Follow @nderleColin
I called them "Manny and the Jett" before it was cool.
read more from Colin Anderle