In 2016, Zach Davies was a pleasant surprise for the Brewers.  He threw over 160 innings and posted a 4.24 DRA, which was good for 2.1 WARP.  Because he was only 23 years old for all of last season, the Brewers and their fans were rightfully optimistic.  Davies was a young pitcher with some upside, and he was a stark contrast to the rest of the Brewers’ young starters, who otherwise all struggled mightily.

Thus far in 2017, Davies has struggled.  Entering Monday’s start versus St. Louis, he made five starts and threw 24.7 innings, which averages less than five innings per start.  His recent start against Cincinnati was his best game by far, but he still threw 95 pitches to get through just five innings; this continued in St. Louis, where Davies threw five innings of 2 run ball.  Davies has already walked 13 batters after having walked just 38 all of last season.  His 1.92 strikeout-to-walk ratio is disappointing, and a far cry from his 3.5:1 rate a year ago.

What those numbers suggest, and what the games bear out, is that Davies is struggling with his command.  Prior to his start in St. Louis, the charts below from Brooks Baseball indicate this as well; where last year he was able to locate consistently at the bottom of the strike zone, he is unable to do so as effectively this year. 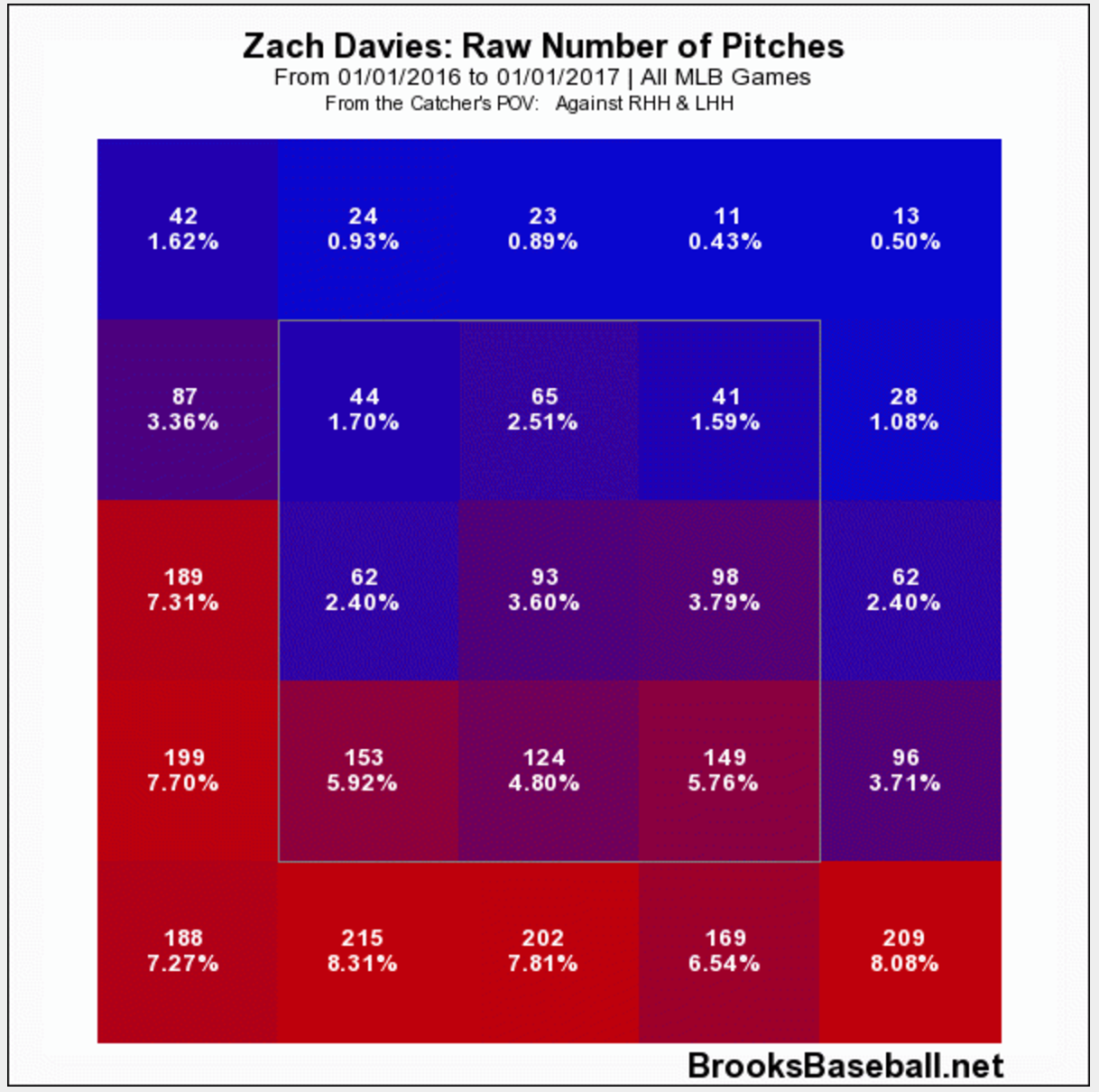 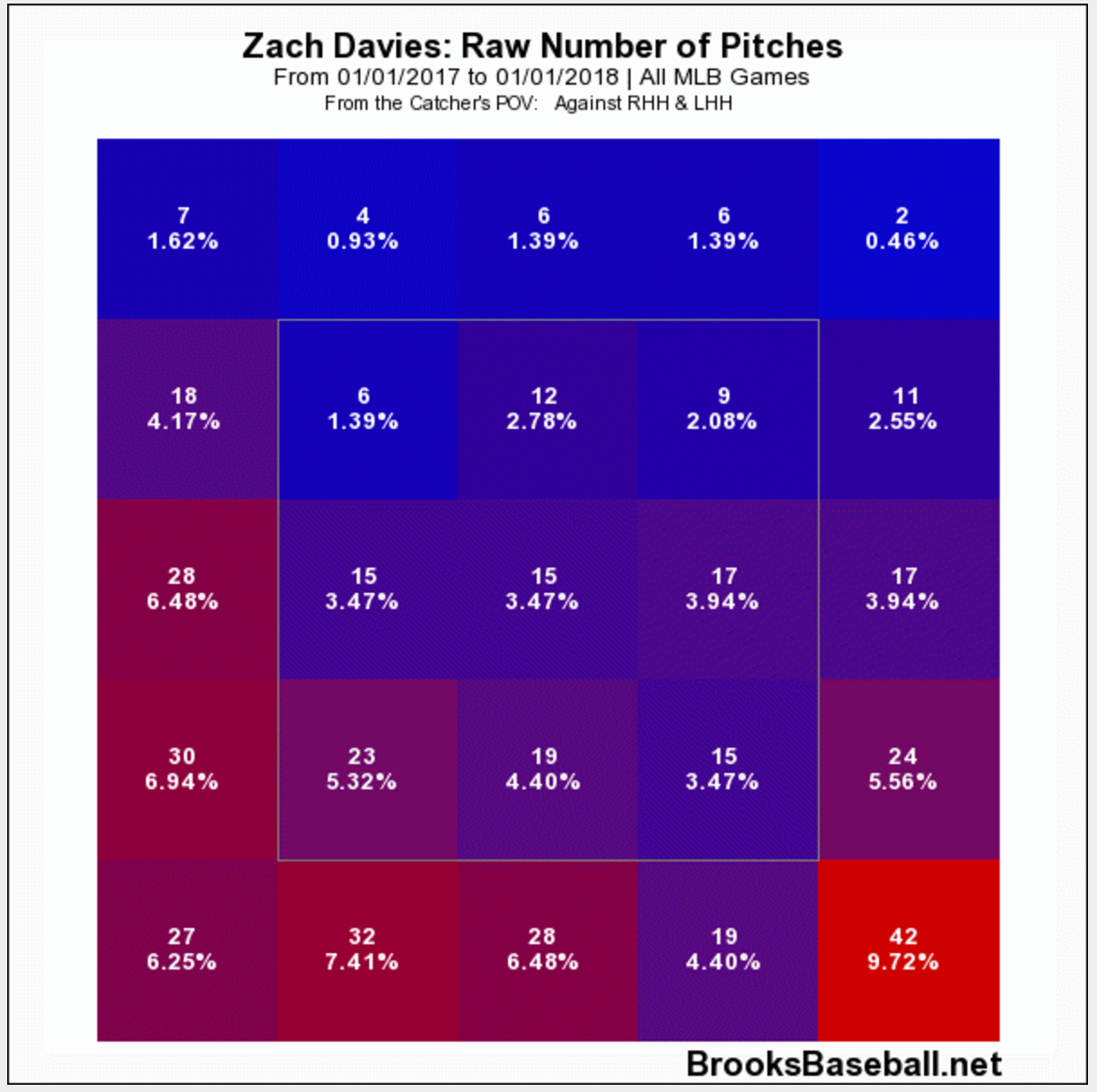 Davies is a sinker-ball pitcher, so ideally his pitches drop and have some arm-side run.  His 2016 zone profile suggests that this is what he was aiming for last year; his high concentration of pitches just at the bottom of the edge of the zone and inside on right-handed hitters indicates that his pitches were in fact bearing down and in on righties.  This year, though, that has not been the case.

It is possible that this is a purposeful change, although I think it is unlikely.  To try and get more strikeouts, pitchers may try and pitch up in the zone, or they may try to be less predictable with their pitch location.  However, Davies is a sinkerballer, and those types of pitchers try and induce soft contact.  Given that he had a solid season last year, there was no reason to expect him to try and drastically change his approach to pitching.

When a pitcher’s ability to locate changes this drastically, release point is an obvious culprit.  Pitchers are taught to try and have the same release point for all their pitchers because it increases deception and gives hitters fewer clues as to what pitch they are throwing.  On some level, complete uniformity is more a dream than a tangible goal, but pitchers do generally aim to try and release the ball from the same spot.

I have included below both the vertical and horizontal release point graphs from Brooks Baseball from 2016 and 2017, broken up by month.  A noteworthy aspect of the graphs is how inconsistent his vertical release point appears to be, although it is worth remembering the difference between 5.7 feet and 5.5 feet is just a couple inches. 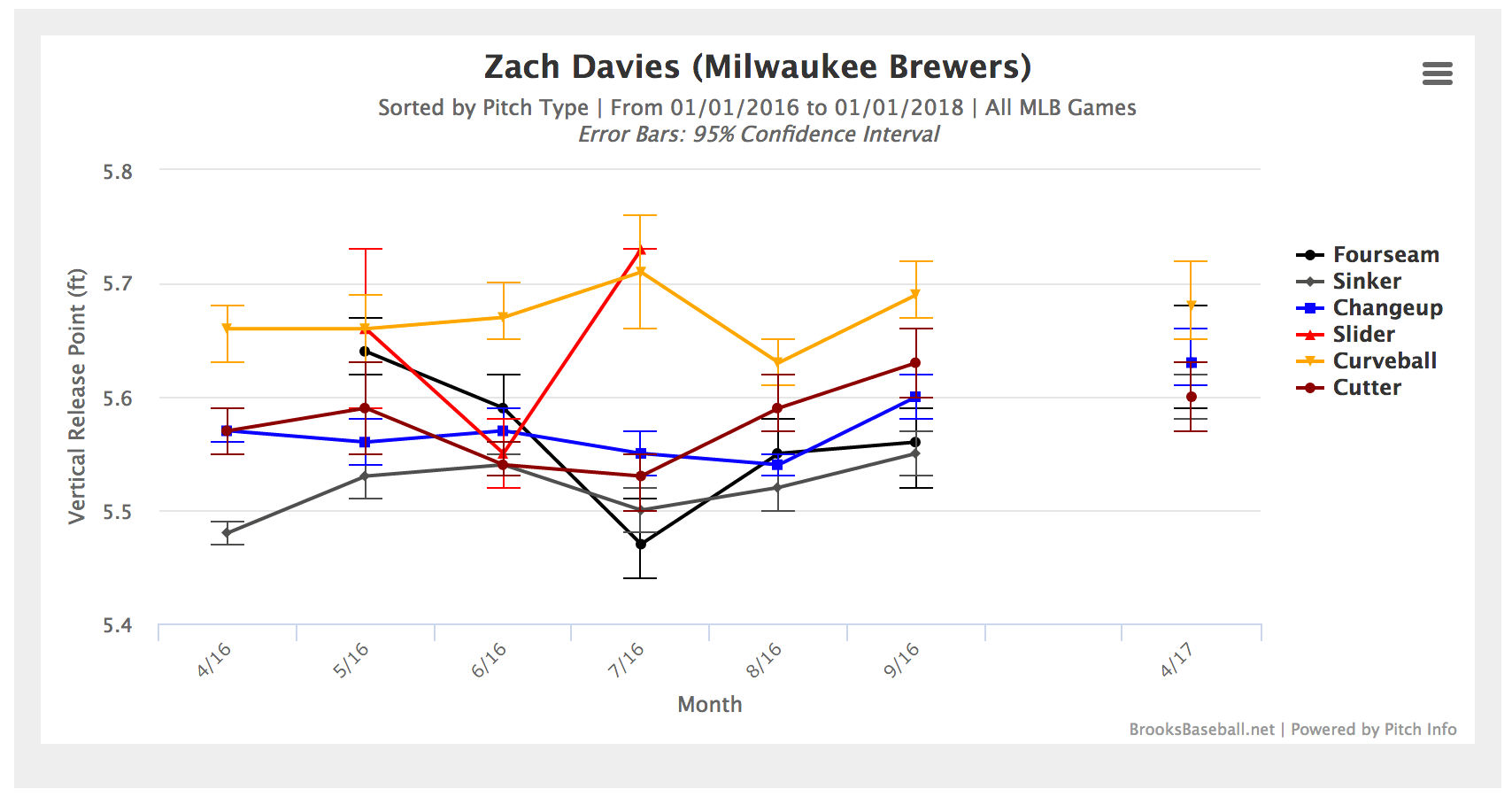 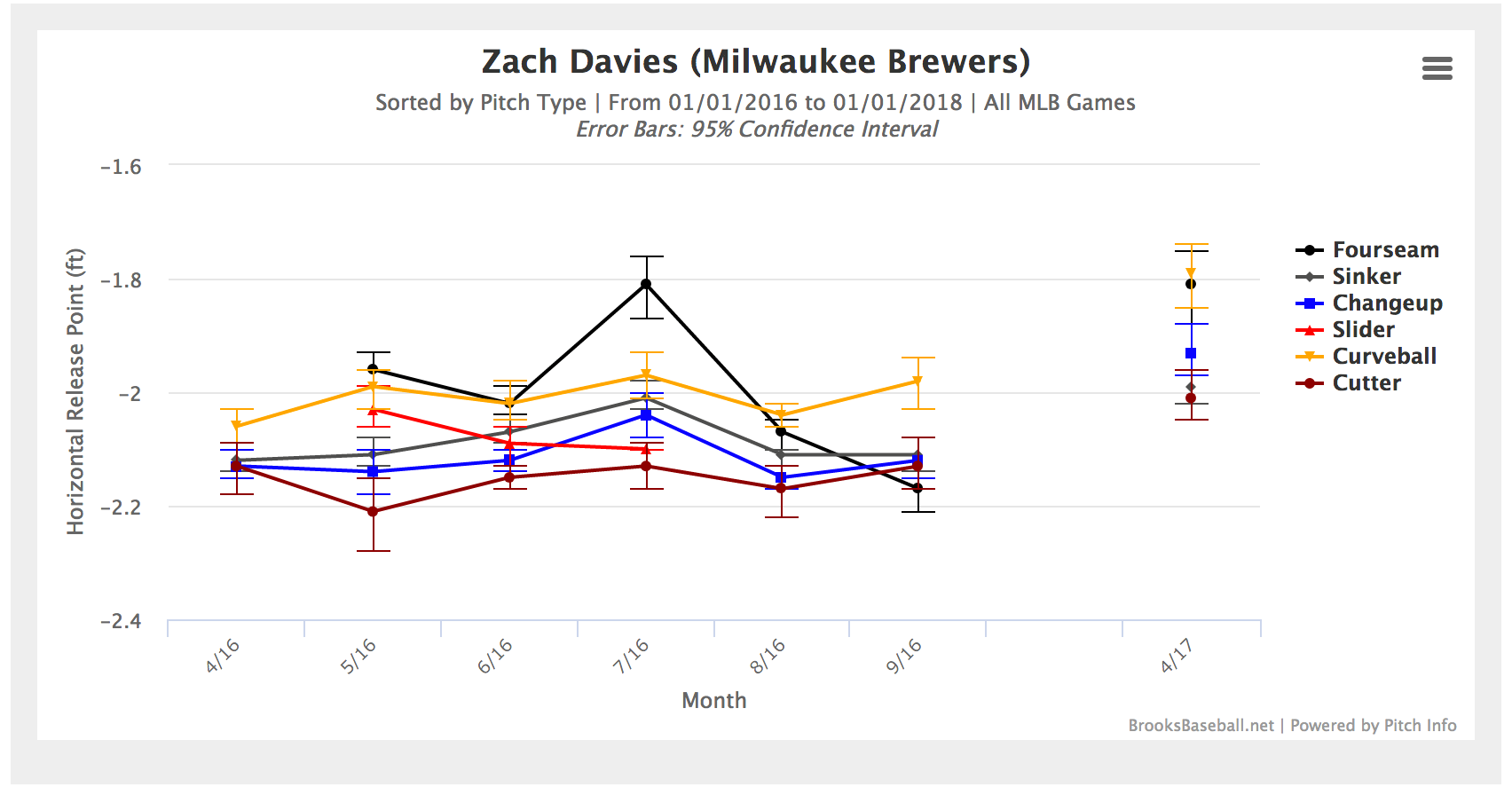 However, what I find the most fascinating is what has happened to his horizontal release point thus far in 2017.  His vertical release point appears relatively unchanged from the end of last season; his curveball release point is about the same, his cutter is a little bit down, and his sinker, fourseam, and changeup are a little bit up.  His fastballs and changeup, though, are up only a fraction of an inch.  The error bars on the graphs demonstrate that these measurements are not perfect, but his release point is up on those pitches by approximately half an inch.

His horizontal release point, though, is very different than it was at any point last year.  There is one obvious explanation, which is that he has changed his position on the rubber.  I have included below stills from 2016 and 2017. 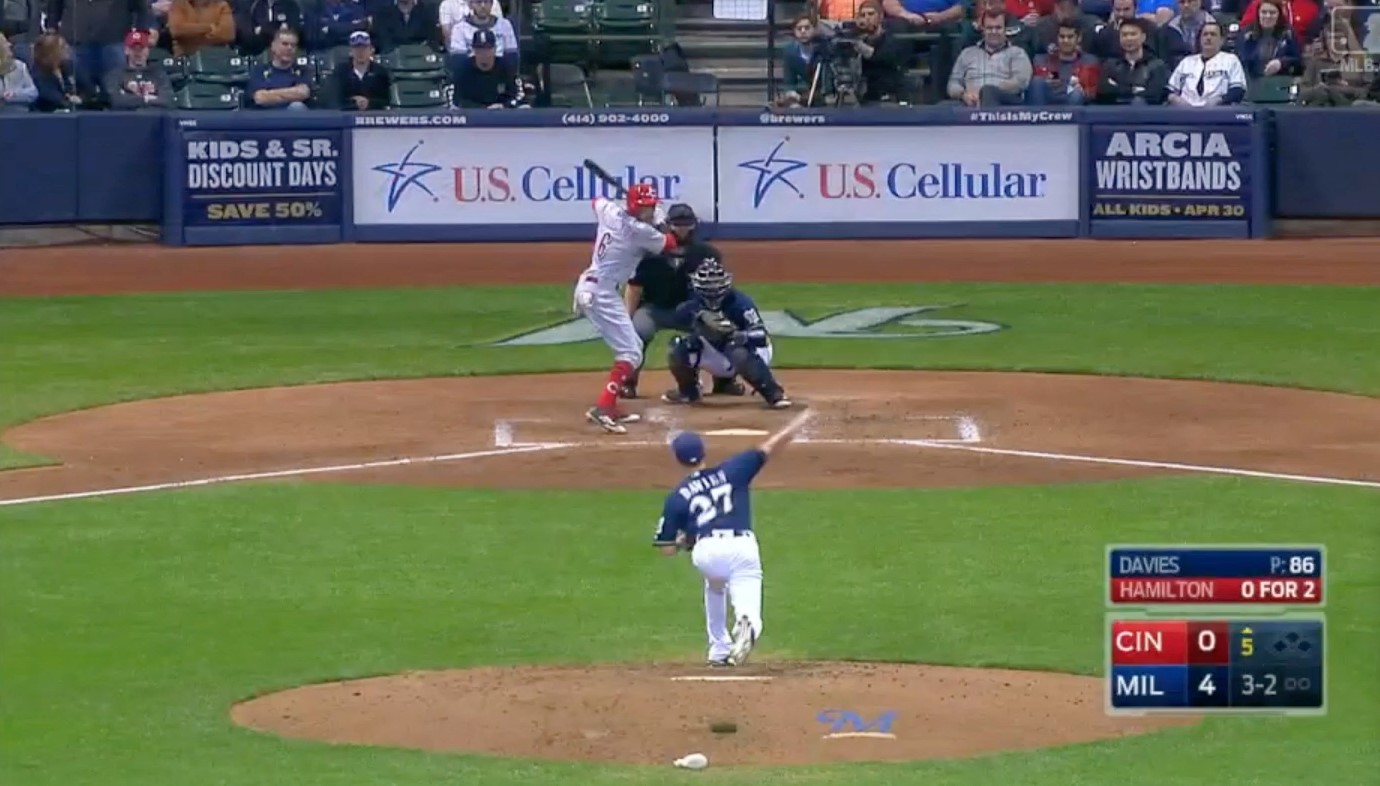 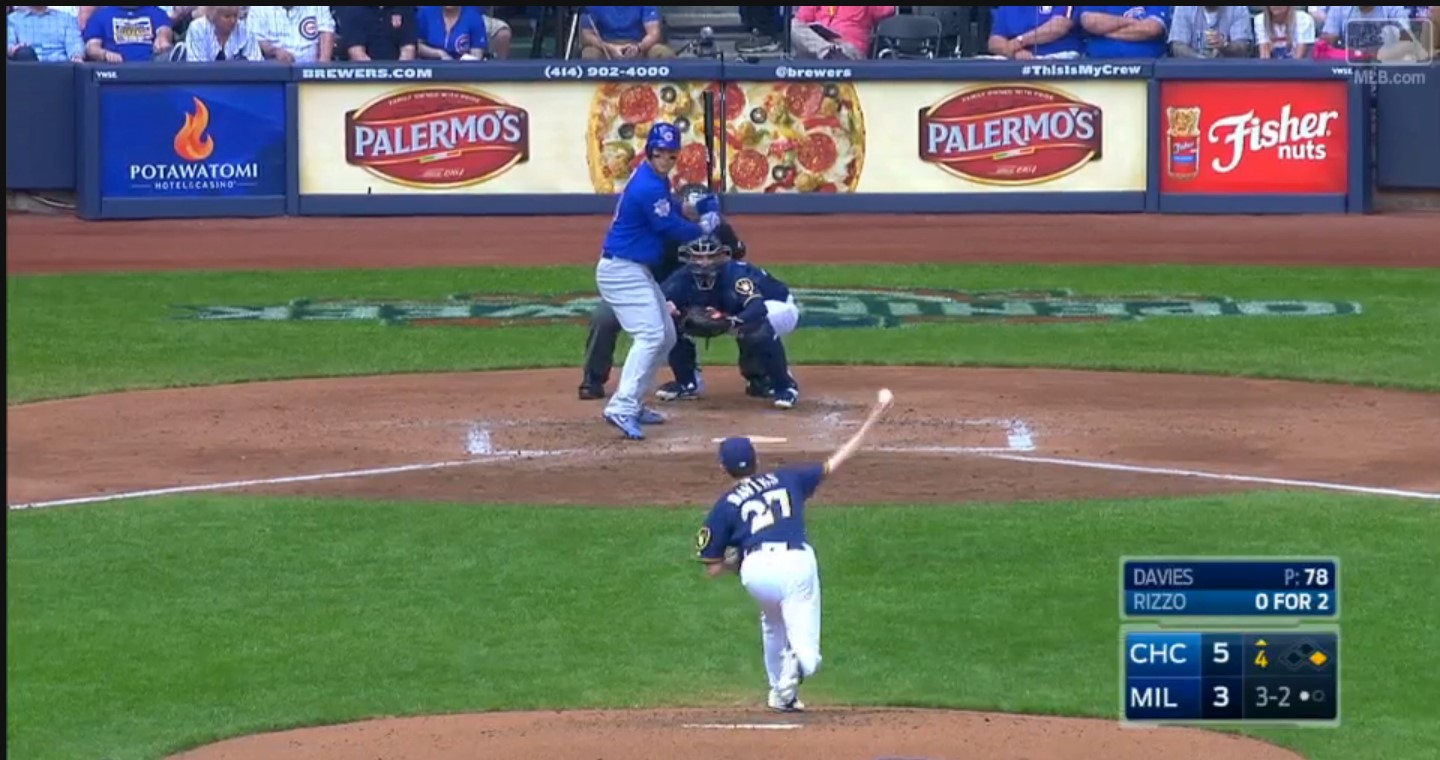 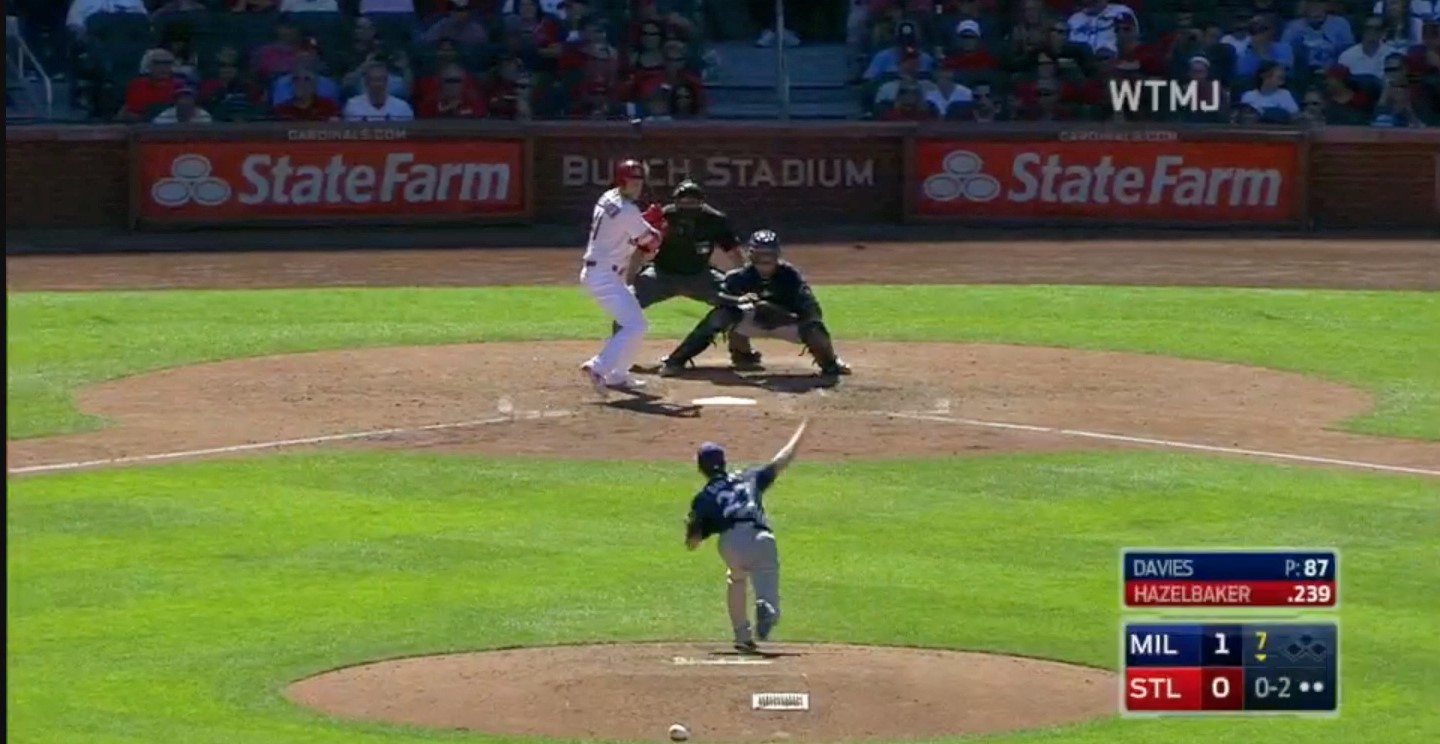 It is certainly possible that he is more centered on the rubber this year, although this amateur filmwork would not confirm that.  If a camera is slightly off-center, then it will skew our view of this phenomenon, even if we cannot know that is happening.  Unfortunately, it is difficult to tell too much from last year; the camera directly behind the pitcher is relatively rare, and an offset center field camera will not provide the information needed to confirm this theory.  As was mentioned above, this is certainly the most plausible explanation; the alternative is that he is using a different throwing motion, given the lack of change in his vertical release point.

If the simplest explanation is in fact the correct one, namely that Davies has simply shifted over on the rubber, then that is also fascinating.  First, I’m not sure that going into the offseason we would have thought that Davies needed to make this move.  He had a slight platoon split, but it wasn’t tremendous, and sinker-ballers tend to struggle against opposite-handed hitters anyway because their pitches move back towards the barrel of the hitter’s bat.  And second, when he struggled this year, he did not revert back to his previous spot on the rubber; instead, he moved further towards first base. 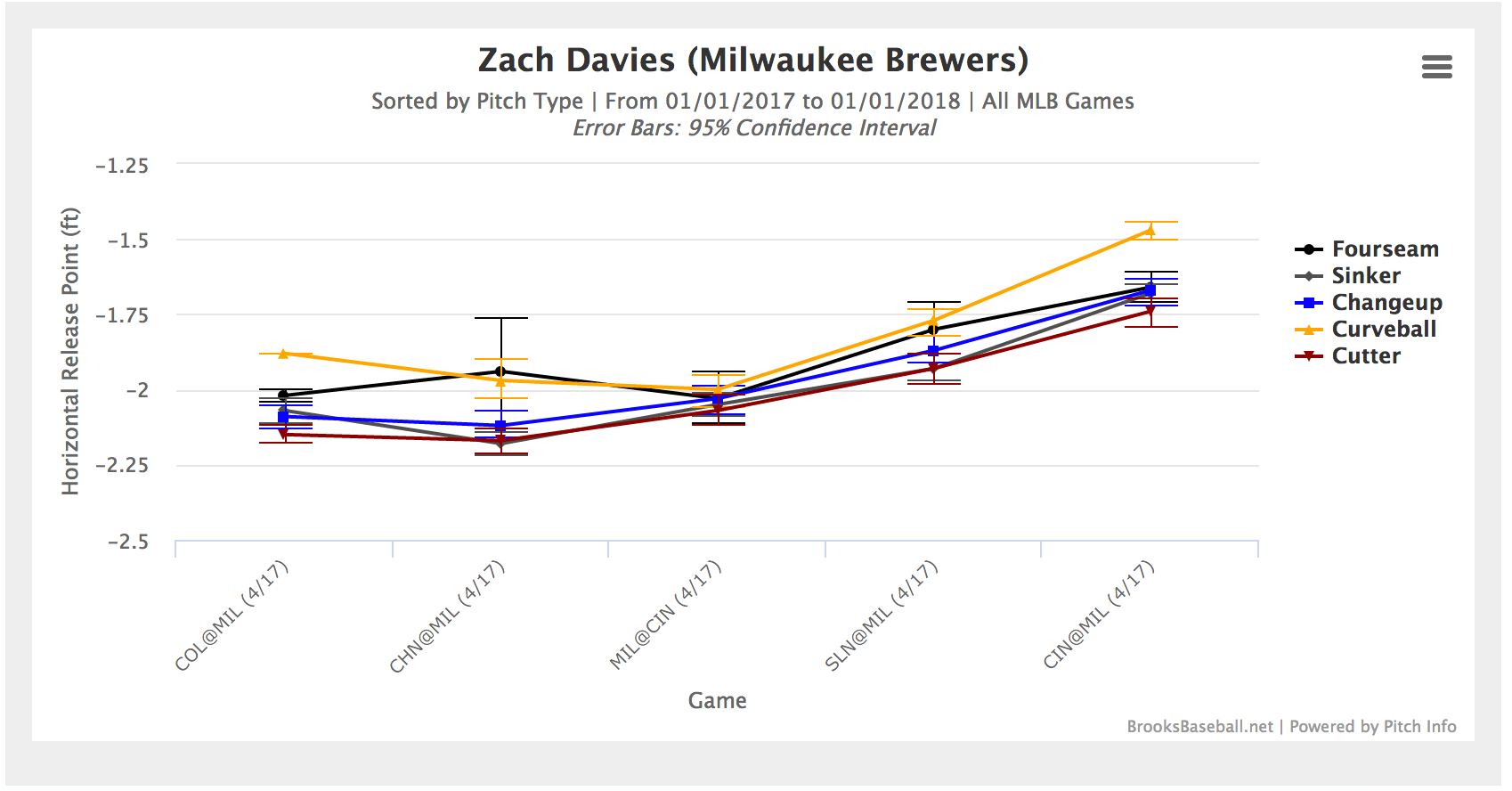 I honestly am not convinced that Davies has just moved on the rubber; for one, his inability to locate as well as he did last year suggests there is an additional factor at work here.  However, I do not have another satisfactory explanation for what he is doing, or why.  It is something I will continue to monitor throughout the season, though.