Jimmy Nelson has been the breakout star of the pitching staff this season.  After seeming to take a step forward in 2015 and posting a 4.20 DRA in 177 1/3 innings, he struggled last year, to the tune of a 5.83 DRA and -1.0 WARP.  In 2017, though, he has reversed the trend and has been even better than he was in 2015.  Entering last night’s start in San Francisco, his 3.41 DRA ranked 22nd in all of baseball among pitchers with at least 100 innings, and his 3.7 WARP ranked 16th.  With this level of performance, he is a true anchor for the rotation going forward.

The biggest takeaway from these last three years of Nelson’s career is a reminder that pitcher development (and player development generally) is not always linear.  DRA is, by definition (“Deserved Run Average”), designed to measure the pitcher’s actual performance in a given time period, so it’s not as if he simply got unlucky last year.  Instead, his bad season was sandwiched by two good ones.

Nelson’s improvements this season have been attributed to mechanical adjustments, and the results have been obvious.  He has the highest strikeout rate of his career and the lowest walk rate, and his overall performance has reflected that.  His 3.74 ERA is the best of his career, and it comes despite him allowing a .343 BABIP, the second-highest mark of his career.  He has been a very good pitcher this season.

“Mechanical adjustments” is an explanation of which I am generally skeptical.  Many big leaguers are constantly tinkering as they try to make adjustments or deal with injuries, but “mechanical adjustments” is often provided as the reason for hot streaks.  I don’t doubt that mechanics are a part of hot streaks, but without an explanation of why other adjustments made by other players (or even the same player at a previous point in his career) did not work, I am skeptical that mechanical flaws were actually causing the problem.

On one hand, Nelson is a case in point for that.  Nelson was a good pitcher in 2015 and has now been a good pitcher again in 2017.  His adjustment this year, however, has not been to go back to what he did in 2015.  Instead, as the graphs below demonstrate, he is taking his mechanical changes last year and enhancing them.  I am using release points to reflect mechanical adjustments because they are sensitive to any changes being made and can vary widely depending on the specific timing of weight transfers or similar seemingly small changes. 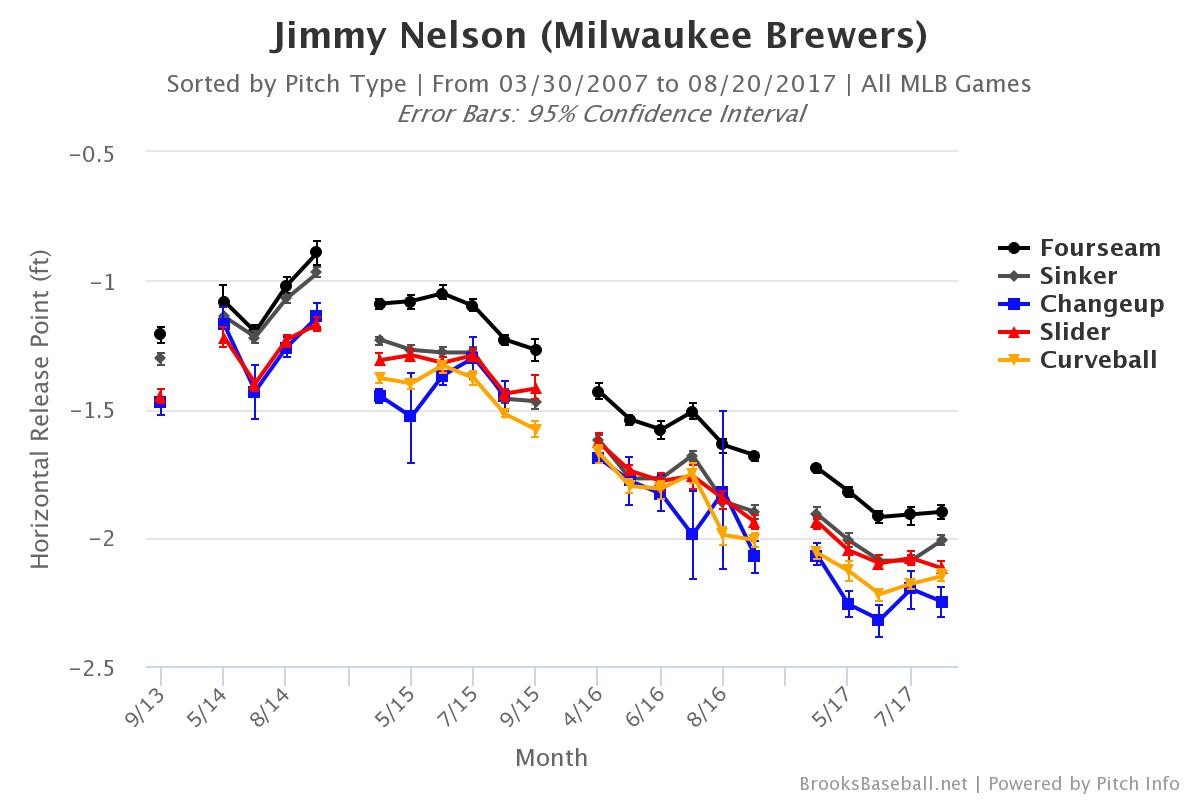 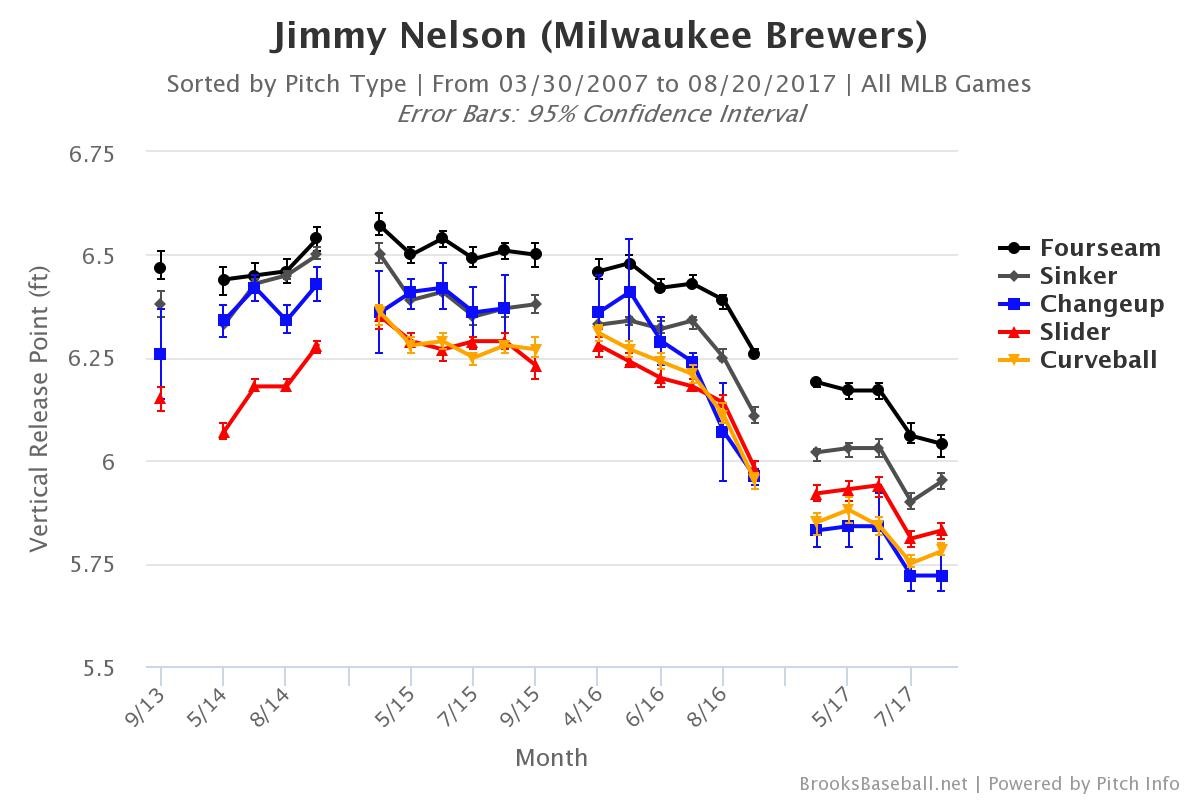 In 2016, his horizontal release point moved off-center.  This year, rather than moving back towards the center, it has moved further to the right.  Last year, his arm slot dropped over the course of the season.  This year, it has stabilized at a much lower spot.

Essentially, if Nelson’s struggles last year were due at least in part to mechanical changes from the year before, he has not fixed those changes.  He has instead settled in at where he ended last season.  His release points have been overhauled completely from where they were the last time he was successful.

Despite the differences between 2015 and 2017, the obvious similarity between the two years is the consistency over the course of the season.  Nelson’s release points did not change a ton during 2015, and they have not changed significantly this year either.  By contrast, his arm slot dropped dramatically between April and September of 2016.  Consistency being a net positive is not a surprise, but I am surprised at the extent to which it is by itself a benefit.  There are confounding factors here, such as Nelson being less willing to tinker when he is successful, but the difference between his 2015 and 2017 release points is striking nonetheless.

I am not qualified to say whether his 2015 or 2017 mechanics are objectively better.  In fact, there probably is not a correct answer to that.  But the changes are working for him this season, and given how stellar his walk and strikeout rates are, the improvements do seem to be real.