I went into this research assignment trying to figure out what has to go right for Jhoulys Chacin to be good this year.  I’ve come out of it with no real idea at all.

Chacin has had an up-and-down career.  He was quite solid for many years in Colorado, which is impressive given that he was pitching in Coors Field approximately half the time.  He also had some very bad injury-shortened years for the Rockies in 2012 and 2014, though, and a shoulder injury ultimately ended his tenure in Denver in 2014.  After spending time in both Triple-A and the majors in 2015, Chacin rebounded and was halfway decent for two teams in 2016 before being above-average with the Padres last year.

Park effects undoubtedly impact this analysis.  Chacin has spent the bulk of his career in Coors Field and Petco Park, which are at either extreme of the spectrum.  And although park factors provide adjustments for the stadium, those fixes go into overall numbers.  They do not demonstrate how a pitcher might have changed his approach in a particular stadium, and pitching in Colorado could certainly inspire a pitcher to pitch differently than he did a couple years later in San Diego.

The Brewers signed Chacin this offseason for two years and $15 million, and that relatively low price tag reflects the uncertainty surrounding his performance.  He is coming off a 2.9 WARP season; if the industry believed he were actually that good a pitcher, he would have been in higher demand.  The talent is in there for him to perform well, however, as he has four full big-league seasons with a  DRA- that is better than average.  The problem is that he also has multiple seasons where injuries have limited his mound time and severely impacted his performance.

The injury history is certainly relevant here.  In both 2012 and 2014, Chacin missed time with shoulder problems, and shoulders are still a black box in terms of public understanding.  We don’t know exactly how this affected Chacin, but we would have expected to see some relevant dip in velocity or a changed arm slot—and those were not present. 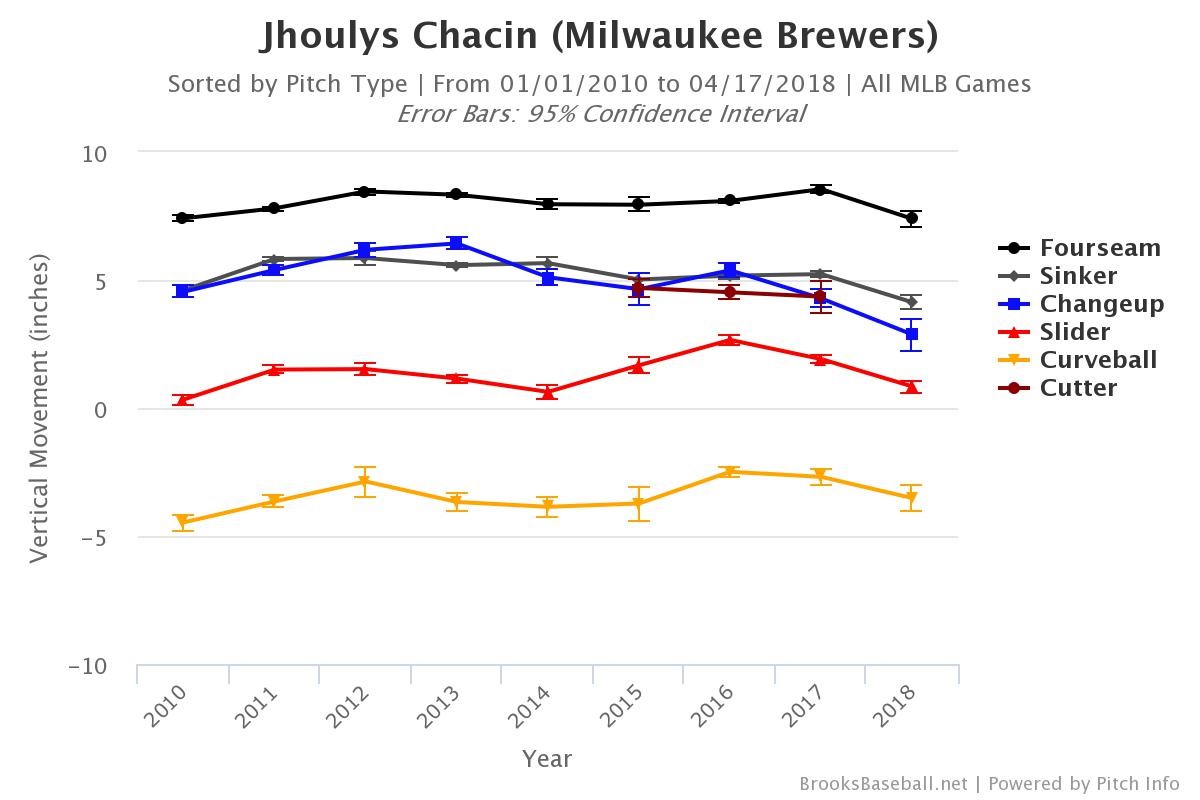 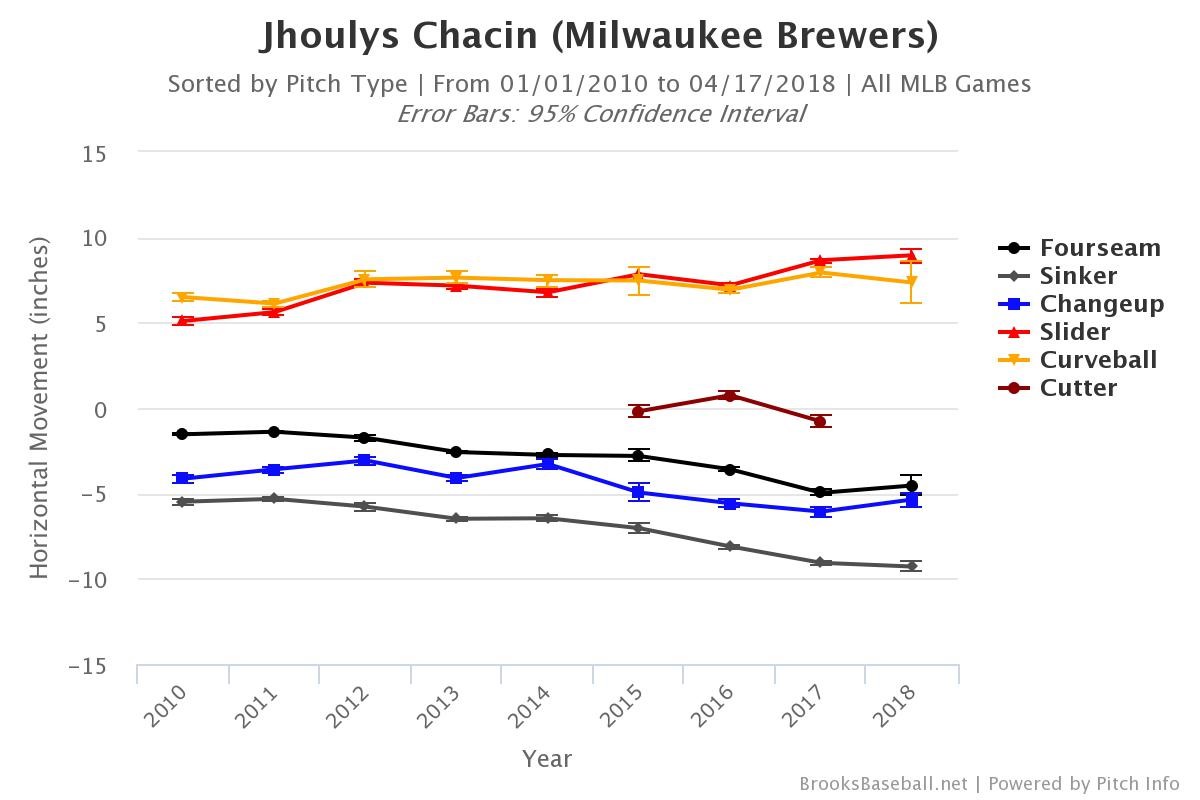 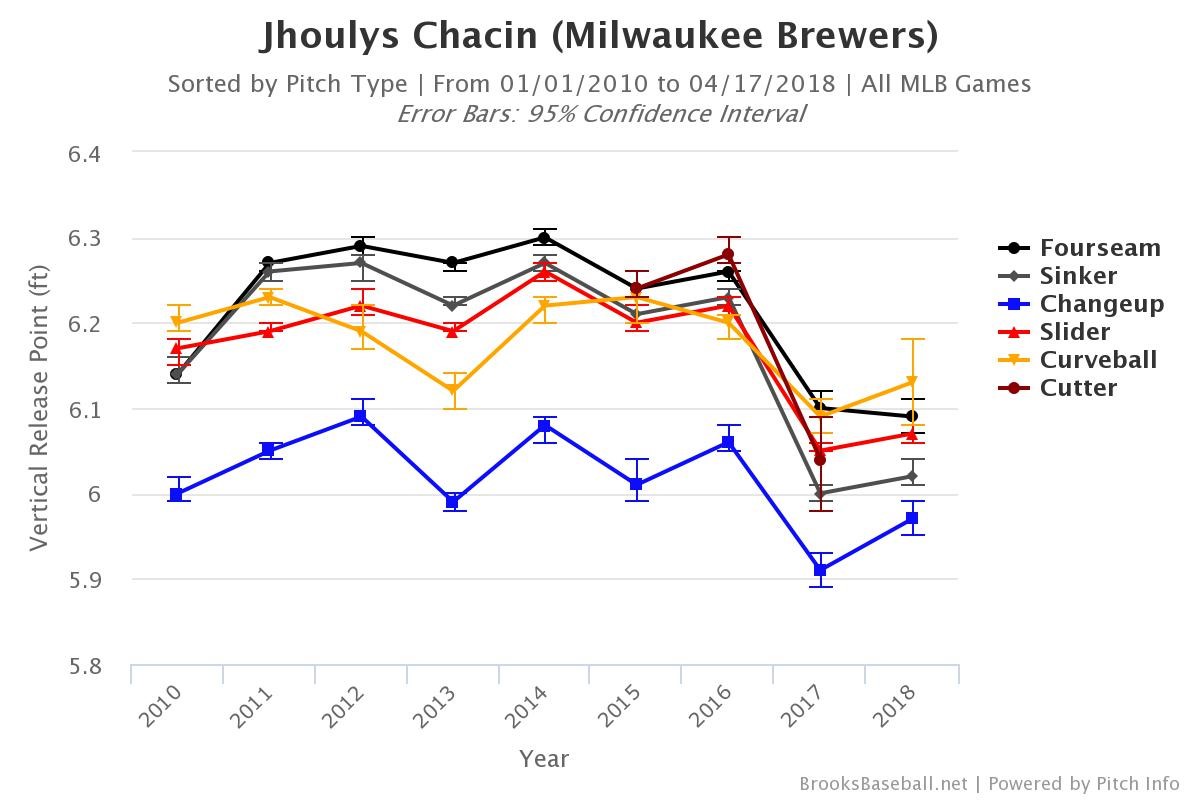 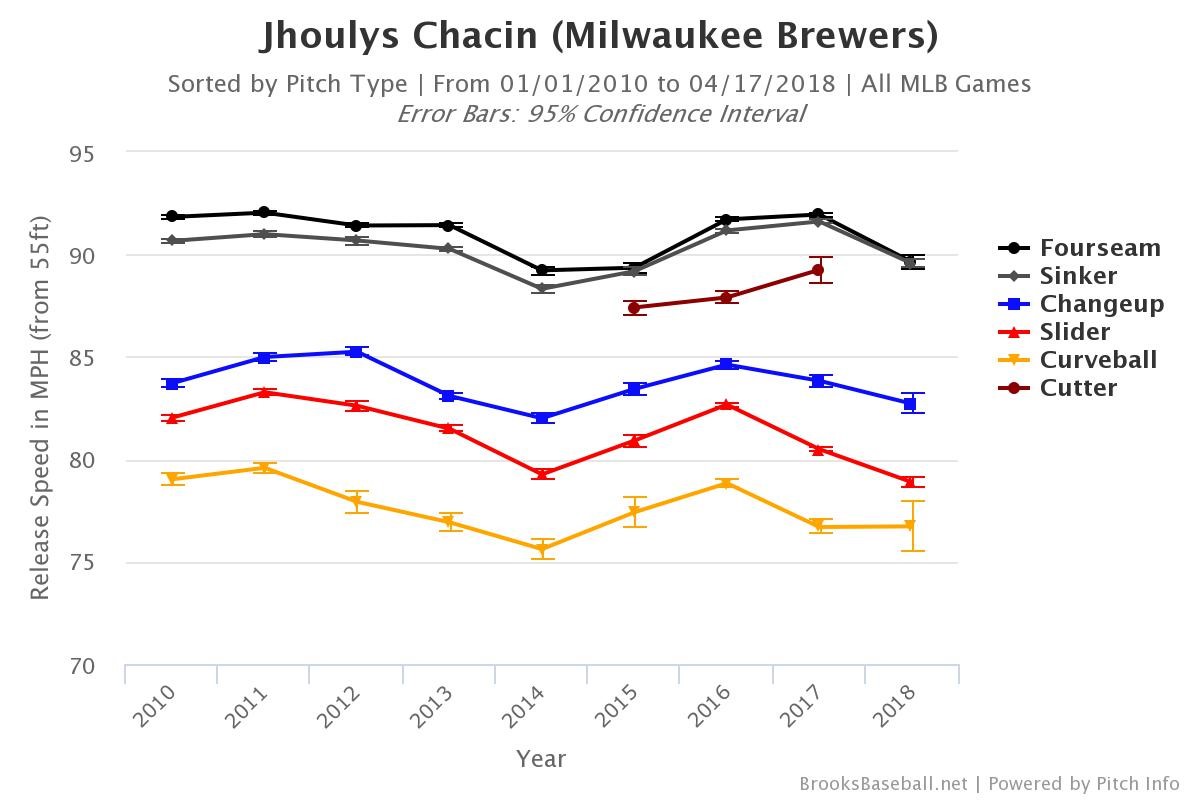 The graphs above show (in order) Chacin’s vertical movement, horizontal movement, vertical release point, and average velocity from 2010 through 2018.  There are clearly differences between the years; the injury appears to have sapped his velocity beginning in 2012, and last year he dropped his arm slot significantly.  But there aren’t trends that repeat themselves in his good seasons and aren’t present in his bad seasons.  It’s not as if the injury forced him to drop his arm, and he has been better since he has been able to correct it.  In fact, his worst years look a lot like some of his good ones.

A possible response is that none of this matters; Chacin is 30 now, and the injuries and general wear-and-tear have forced him to reinvent himself and thus whatever made him good in his early 20s simply isn’t relevant in 2018.  That could very well turn out to be true, but it isn’t as if he regained his velocity between 2016 and 2017.  He did drop his arm and generate more movement last year, but his arm angle in 2016—which was one of his better seasons—was one of the highest of his career.  There simply is not a demonstrable pattern. 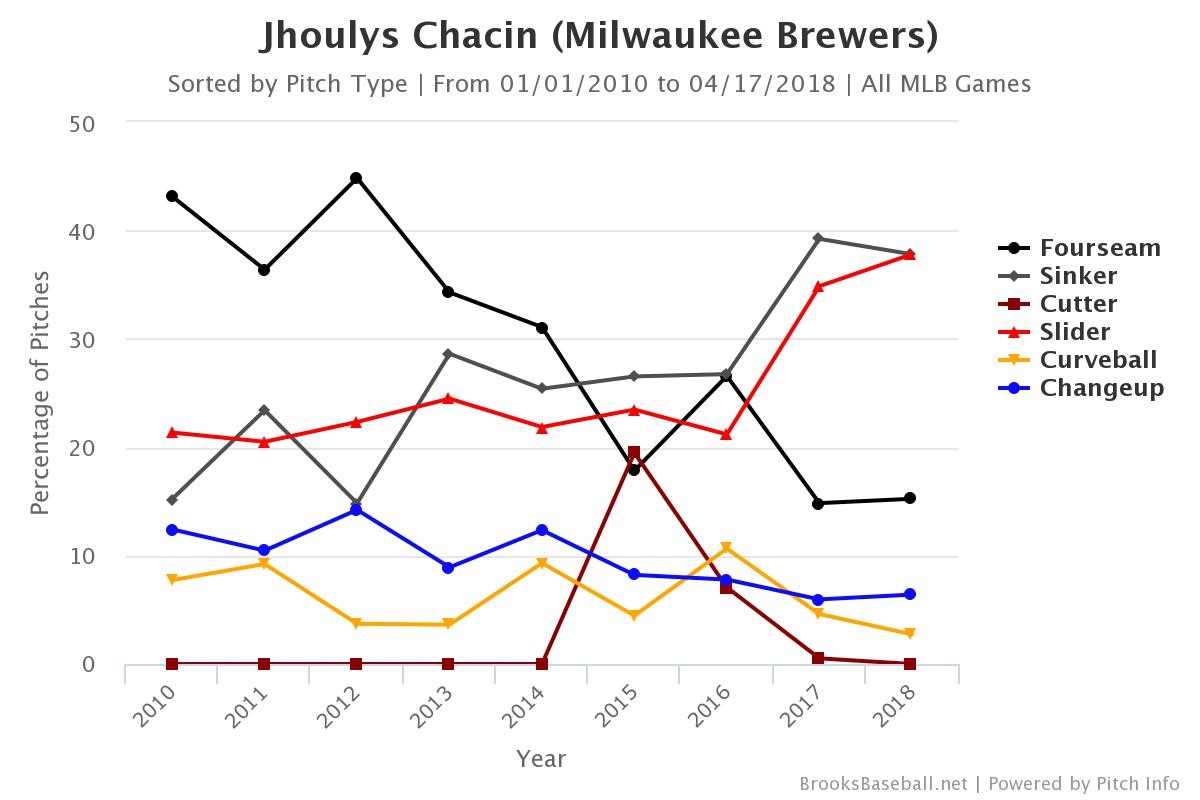 One change Chacin did make last year was to start throwing his sinker and slider more than he ever had.  That didn’t correlate to an increased ground ball rate (his 50 percent mark last year was the same as his career mark), and it wasn’t like those two pitches were particularly effective at generating swings-and-misses either.  In fact, hitters made the most contact against his slider of any point in his career.

None of this is to say that Chacin will or won’t be good this year.  I was expecting to find something to clue in on when watching his starts this year; I assumed he had certain habits that he fell into when he was struggling.  I did not find any, though.  He is certainly a different pitcher in 2018 than he was in years past.  I assume he will continue to be a sinker/slider pitcher, and I will be watching to see whether he can be successful with that repertoire.  I don’t have any idea what to expect, though.