In game 163, with the division (and perhaps more) on the line, it’s clear that Craig Counsell places ultimate trust in Josh Hader. Hader went two innings in the division-clinching final frames and delivered 3 strikeouts while allowing a single baserunner. The final two batters were not without drama, however, as Javier Baez hit a stinger to left-center field to put the tying run at the plate, after which Anthony Rizzo flied out deep to right.

Those last two batters were probably more worrisome to Brewer fans than they would have been in August, what with Hader on the heels of a 5.11 ERA over the final month of the season. And prior to the division-clinching appearance, as Cat Garcia at the Athletic noted, Hader ran a 19.3 ERA with three home runs in his three outings entering Game 163 (5 Runs, 2 and 1/3 innings). So what to make of Hader’s late-season swoon?

The good news if you’re a Brewer fan is that Hader’s peripheral numbers look almost as strong as ever, and there doesn’t seem to be an immediate culprit that would suggest his overall skills have declined or that he is fatigued as the Brewers get ready for their divisional playoff round on Thursday.

In fact, his velocity peaked in September, with an average four-seamer speed of 95.96. That hasn’t made it easier for batters to catch up to his stuff, either, as Hader is seeing his highest percentage of whiffs on his slider as well as an upswing in whiffs on his four-seamer since June. 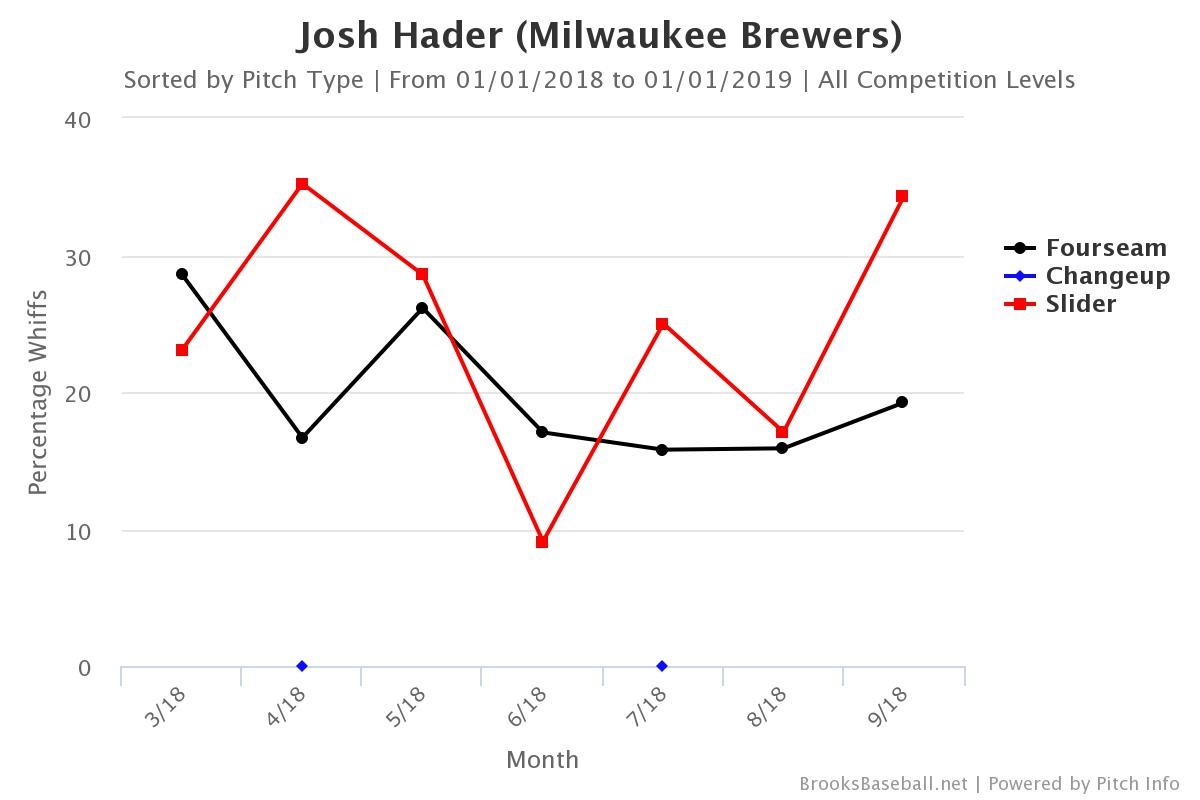 Looking at his command, Hader’s walks have been up in September, but that has been balanced out by striking out more than half the batters he has faced, leading to his best month yet of Strikeout Percentage to Walk Percentage.  Even his release points have remained consistent, suggesting there’s not a major mechanical adjustment that has been made. In fact, the one data point that really stands out as being much worse than his season average seems completely luck-based.

The four home runs Hader surrendered in September is by far the most he has given up in a month this season. It represents a full 44 percent of the dingers against his ledger for 2018. Those have come on the back of a completely unsustainable 40 percent of his fly balls that have gone over the fence. To put that in context, the league leader in home run/fly ball rate is less than half that number. So, even if you regress that number to be league-leading, Hader would have only given up two jacks in September and his stat line would look much better.

There’s one red flag in his underlying numbers that’s difficult to resolve. While all the fielding independent pitching usual suspects like strikeouts and HR/FB rate are fine, Statcast metrics seem to present a pattern that is a little disconcerting. 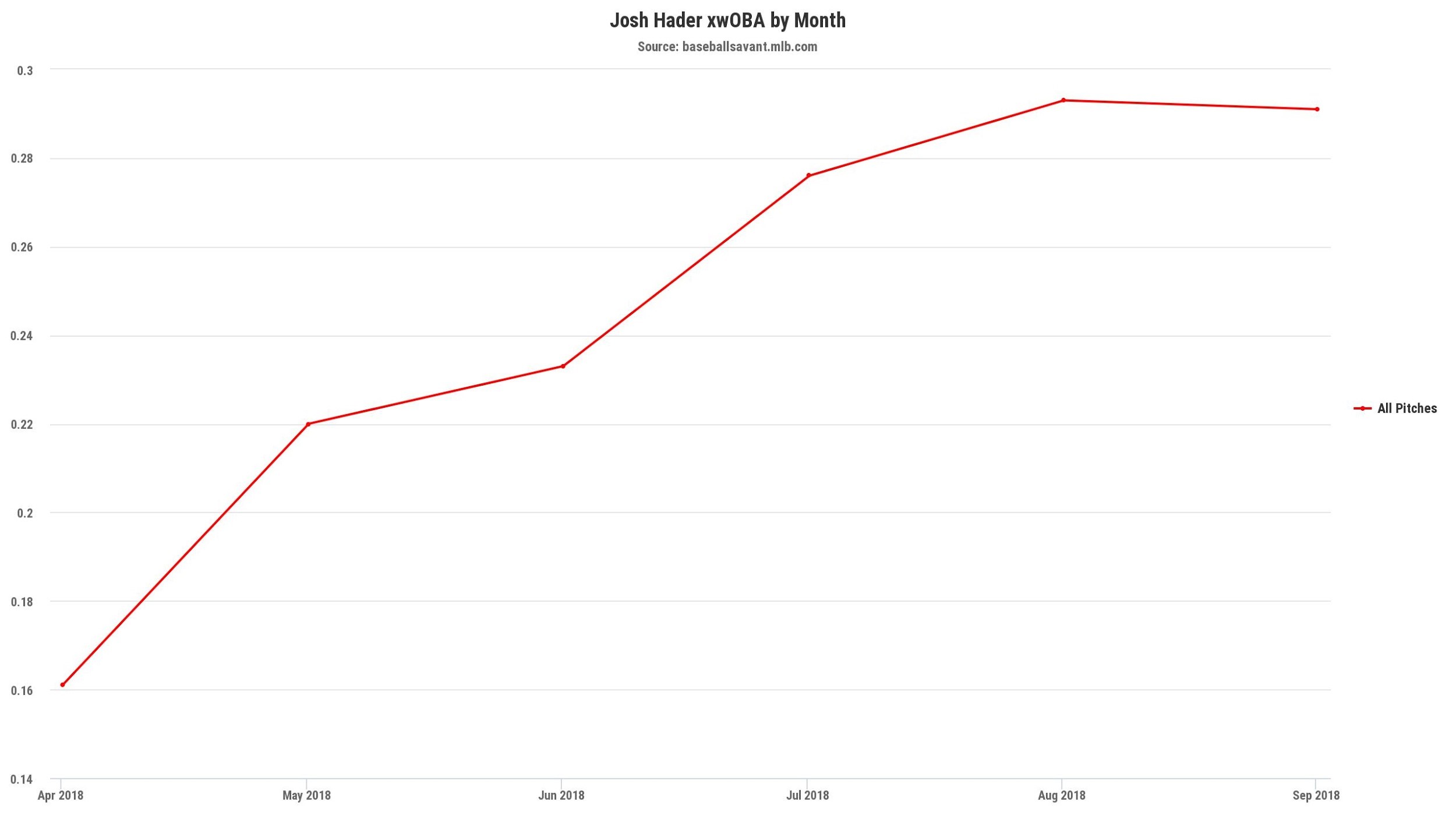 His Expected Weighted On-Base Average-Against (xwOBA) according to Baseball Savant’s advanced metrics has increased throughout the season. That takes regular wOBA numbers such as walks, batted ball type, and strikeouts, but also adds in quality of contact metrics like launch angle and exit velocity from batted balls. So for whatever reason, given that most of Hader’s underlying numbers look fine and bound to regress back to the mean, batters are still making higher-quality contact against him, and are doing so more and more and the season goes forward.

That’s difficult to reconcile, and I’m not sure what to make of it. It’s odd that almost all of the underlying numbers would continue to be dominant but hitters are somehow making better contact at the same time. It’s possible that Hader is somehow tipping his pitches. Maybe hitters are guessing rather than trying to react to the ball and having more success. They’re still missing a ton but when they “guess” right they’re making more solid contact.

But more likely is that there’s not too much to reconcile there in the first place. After all, even as Hader’s xwOBA has continued to climb, he has been arguably the most dominant reliever in all of baseball and before September at least, it hasn’t seemed to have too great of an effect on his performance. And even with higher quality contact, it probably matters less when you’re striking out half of the batters you face.

Still, that quality of contact reared its head in the bottom frame of game 163. Granted it was against the two best hitters in the National League’s second-best(!!!) team.

For now, it doesn’t matter, and maybe won’t even as the postseason goes forward. Even with the higher-quality contact, the Brewers are still going to be more than comfortable with someone with those kind of strikeout numbers and a homerun to flyball ratio that’s bound to regress. Josh Hader should continue to see high-leverage innings, and see success in those innings. Probably.