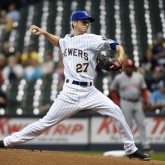 Just two weeks ago, I speculated about the state of the Brewers’ rotation. I concluded that Matt Garza’s contract status and Taylor Jungmann’s 2015 performance have made them near-locks for the Opening Day rotation. Furthermore, I argued that although Wily Peralta has recently trended in the wrong direction, he has proven to be a consistent part of the […]