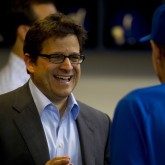 Milwaukee announced over the summer that Doug Melvin planned to step down after the regular season and that an extensive search for a new general manager had been put in motion. Some names on the organization’s short list have begun trickling out into the media. Mike Hazen, assistant GM in Boston, is reportedly in the […]