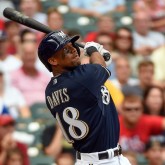 I’ve written a lot about Khris Davis this year. I guess I have a thing for underdog types, which describes Davis. He was never heralded as a top prospect in the Brewers farm system. I don’t think he even appeared on team-specific top-prospect lists. Thus, the fact that he has retained a starting role speaks to his […]