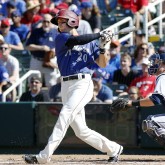 On August 1st, the Milwaukee Brewers sent catcher Jonathan Lucroy and reliever Jeremy Jeffress to the Texas Rangers in exchange for prospects Lewis Brinson, Luis Ortiz, and a player to be named later. The two clubs negotiated almost right down to the 3 pm CST deadline and agreed to announce the PTBNL after the completion […]