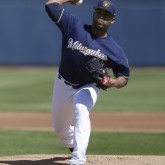 What the Brewers are attempting on Opening Day has only been done eleven times in the past ten years, and the decision isn’t sitting too well with some fans. After the news broke that 32-year-old second year starting pitcher Junior Guerra would get the ball to start the season, Tom Haudricourt, a Brewers beat writer […]