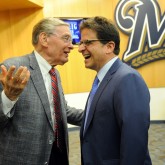 The Brewers are undisputedly a small-market team. In fact, Milwaukee is the smallest American television market, and they currently suffer from one of the worst television contracts in all of baseball. The largest local contracts have obviously gone to the teams in bigger markets—the Yankees, the Dodgers, and the Phillies, for example—but the Brewers’ deal does […]