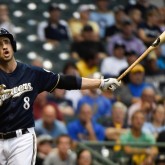 Countless articles have been written about performance-enhancing drugs (PEDs) and baseball. Users have been called cheaters, while the decline in offensive production across Major League Baseball has been tied to a perceived decline in PED usage. In Milwaukee, specifically, the poor performance by Ryan Braun in 2014 — a .266/.324/.453 slash line in 580 plate […]