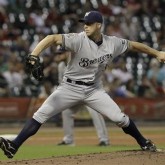 On July 25th of this year, the Brewers took on the Diamondbacks at Chase Field. Arizona won 2-0, as Rubby de la Rosa outdueled Taylor Jungmann. For the Brew Crew, the most influential play in the game occurred in the bottom of the first. After Ender Inciarte led off with a double, improving his team’s […]