Injuries suck! They’re no fun, they hurt physically, and they can linger mentally. They obviously affect one’s play on the field. They can make a player miss a substantial number of baseball games, while lingering afterwards. They can even end careers. The Brewers have not been immune to injuries this season (nor has any other team). They’ve seen Carlos Gomez, Wily Peralta, Jean Segura, and perhaps most notably, Jonathan Lucroy land on the disabled list and miss a significant amount of time.

Lucroy, this year, has had it worst of all. On April 20th, he was placed on the 15-day DL, with a fractured toe. Since returning to the Brewers lineup, Lucroy has been a shell of himself. Normally, Lucroy displays a rare combination of great pitch framing skills with the ability to hit for average and power. This has made him an elite catcher. and player, in all of baseball. In 2014, Lucroy ranked 5th in catcher framing, finished with the 4th-best TAv among catchers, and was 4th in WARP among all position players. In 2015, though, Lucroy’s framing has drastically dropped to the point where we have to begin to wonder if we can call it a strength. His batting average has also drastically dropped, but what is most concerning is that he has stopped hitting for power.

That being said, while injuries have definitely hampered Lucroy’s 2015 season, he’s not a player that one often describes as injury-prone, at least that never been the typical narrative. When discussing which players on the Brewers are more prone to injuries, the narrative typically goes towards Ryan Braun. This is not an unreasonable charge, as Braun has definitely experienced many injuries throughout his career. Without data, though, it’s difficult to accurately determine which one of these players has suffered more injuries. Therefore, I wanted to find which Brewers player had dealt with the most injuries. In that way, we can perhaps more accurately define which player is most disposed to injuries on the Brewers. I could have simply researched which player had suffered more injuries between Lucroy and Braun but, you know, that would have been boring.

One quickly finds, though, that trying to answer this question is not easy, due to a few factors:

(A) Injury data is unfortunately difficult to come by.

(B) What does being injury-prone even mean? Is it somehow the anticipation of a future injury due to style of play or pitching mechanics? Is it simply a combination of a multitude of injuries? Or is it having missed a lot of games due to injuries?

(C) Finally, we’re looking at which Brewers players were the most injury-prone. So would it count if a player got injured for another team?

Firstly, I was able to gather injury data on the Brewers thanks to Pro Sports Transactions. Unfortunately, the data only extends back to 2004. There is more data prior to 2004, but it’s very limited. So I decided to only analyze a ten-year span (2004-2014). Secondly, this article is not going to be forecasting any upcoming injuries. If I were able to do that, this would not be an internet article, but rather an application for a very well-paid front office position. When it comes to defining whether or not a player is injury-prone, I decided to arbitrarily define it as the number of days one misses due to injury. While I say this, I could see myself getting talked into another definition, but this seemed to be the best definition. Lastly, the injuries of the individuals had to occur when the player played for the Brewers because that’s what Brewers fans best remember. So, for example, even though Ben Sheets had Tommy John surgery in 2010, it did not count because he was pitching for the A’s.

Below, you’ll see a table that ranks the players’ days missed and the number of injuries since 2004, all while they were on the Brewers. You’ll also be able to see the player’s games played for Milwaukee and the years they played for Milwaukee, again from 2004 to 2014. I did this because while a player may have been rarely injured, he may have only played a few games for the Brewers.

As you can see, while Braun has definitely suffered many injuries, he hasn’t missed a lot of games due to injuries. Instead, the player who leads the Brewers since 2004 in that category is Rickie Weeks. Weeks has spent most of his career with the Brewers, though, so while he’s definitely suffered a lot of injuries, I would not label him as the most injury-prone Brewers. That label would instead go to Mat Gamel — who, even though he spent four years with the Brewers, only played 106 games. The rest of the time was spent either on the DL or on the bench with injuries. To further grasp this, let’s get a more visual look. 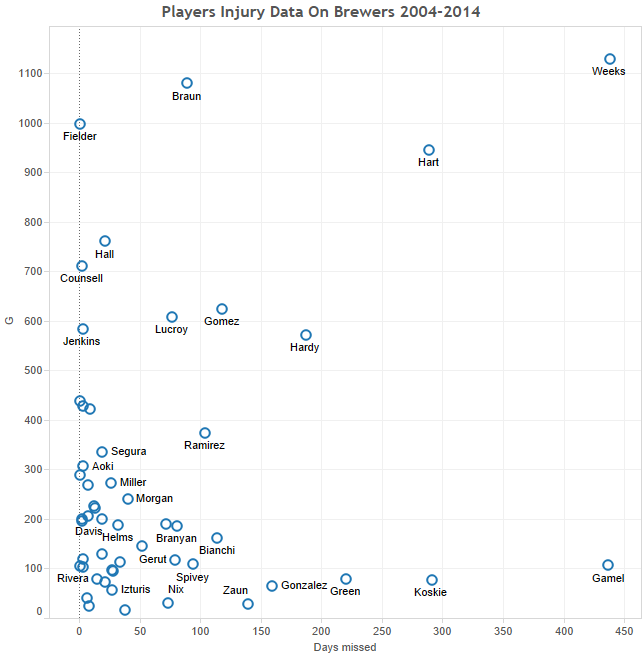 This visual does a much better job of displaying some of the information. It clearly shows that Gamel’s stint with the Brewers was saturated with injuries. In fact, Gamel’s career ended because of this. After spending almost all of 2012 on the disabled list due to a torn ACL, he attempted to author a comeback in 2013 but was unsuccessful. He ended up re-tearing his ACL, which led him to retirement. Gamel’s story is a somber one and serves as an example of how injuries can impact a player’s career, if he’s unable to stay healthy.

Again, Ryan Braun has had numerous injuries and has missed a myriad of games. However, it does not appear to be an unreasonable amount and should not warrant him the label of being injury-prone. His former teammate Rickie Weeks only played 49 more games and yet missed 349 more days than Braun.

The player, though, who can be labeled as the least injury-prone through his tenure with the Brewers is Prince Fielder. He’s played just under 1000 games with the Brewers and only missed one day do to injury. Any way you slice it, that’s an amazing feat, and it’s one of the primary reasons why Fielder found so much success in Milwaukee and why he’s recognized as one of the franchise’s best players.

There’s a lot of information here — and a lot of it can be labeled as noise — but through the noise, we can see that player’s like Braun and Lucroy aren’t nearly as disposed to injuries as one might think. They’ve both played a ton of games with the Brewers and have managed to stay relatively healthy. Going forward, though, I wouldn’t be surprised if both players succumb to more injuries. This is not something I wish upon either player, but as one gets older, injuries start to become more prevalent. Lucroy isn’t very old — he’s only 29 — but he is a catcher. Catchers are typically more susceptible to injuries than other position players. And while Braun isn’t very old either (he’s 31), that’s around the time when players’ bodies start to break down. He hasn’t missed many days to injuries, but he has suffered a lot of them. And, of course, the best predictor for future injuries is the frequency of past injuries.