For one, Nelson’s dealt with more adversity this season than last. He’s pitched in fewer pitcher-friendly parks—his park factor has increased from 98 to 101—and has faced tougher competition, his opposing TAv rising from .257 to .261. So even if he’d put up the same results as he did in 2014, he still would have progressed.

But Nelson hasn’t just sustained his output, he’s built upon it. His strikeout rate has climbed from 18.3 percent to 19.9 percent, making up for a slight uptick in unintentional walks*; he’s continued to keep the ball low, with a 50.7 percent groundball rate that doesn’t diverge significantly from his 2014 mark; and he’s given up far fewer hits overall, lowering his BABIP from .344 to .296. In most areas of pitching, Nelson’s kicked things up a notch.

*Plus, he’s thrown even more strikes this year than last, so he might issue fewer free passes in the weeks to come.

On a pitch usage level, one thing definitely stands out:

The 2014 version of Nelson didn’t possess a curveball; 2015 Nelson does, rather conspicuously. He worked on the pitch during spring training, of which FanGraphs, BP, and others took note. And in many ways, the curve has lived up to the hype: Hitters have swung and missed at the offering 11.3 percent of the time, and have put it on the ground 57.8 percent of the time, good for ninth in his league. Averaging 83 mph on the pitch (the fourth-highest mark of any hurler), Nelson has taken advantage of its drop by consistently placing it low: 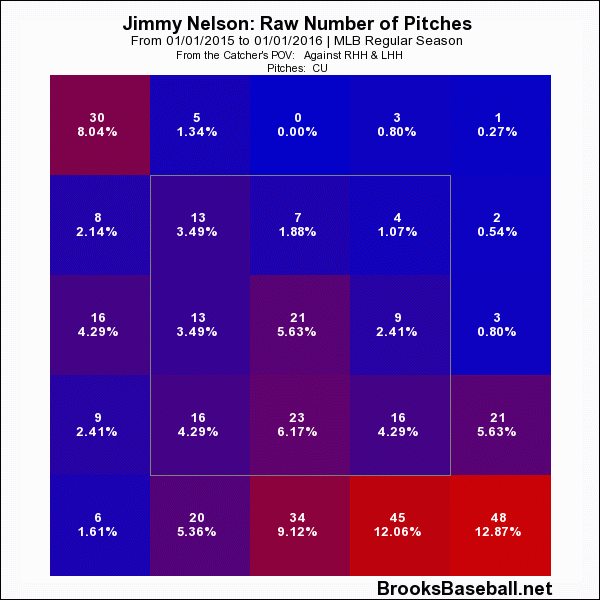 The problem with that approach, however, arises when hitters don’t offer at it, or when they manage to put it in play. Indeed, only 58.2 percent of the curveballs Nelson’s thrown have gone for strikes, and 32.6 percent of the fielded sliders against him have gone for hits—both of them unacceptable numbers. He’s made up for it elsewhere, though, with the holdover pitches from last season.

Unlike his curveball, Nelson’s slider has always had the potential to go far. Its 2014 iteration put up a 21.2 percent whiff rate, miles ahead of the harder stuff he threw. Throwing it 87.3 mph kept hitters off-balance, and rewarded Nelson accordingly. With that said, the slider had its shortcomings; it resulted in a ball 38.1 percent of the time, stayed grounded 38.5 percent of the time, and went for a hit 32.4 percent of the time.

A shift in movement always seems to cure whatever ails a pitcher, and that certainly has with Nelson’s slider. The sliders he’s implemented in 2015 have run an extra inch horizontally and have dropped by almost another inch. Although he’s thrown them to essentially the same part of the plate (low, like the curveball), their bite has vexed hitters to such an extent that they’ve posted a 66.7 percent strike rate, 44.9 percent ground ball rate, and .178 BABIP. Those kinds of figures, along with a similar swinging-strike rate, have made Nelson’s slider the best in the National League, per FanGraphs’ pitch type linear weights.

Aside from a new curveball and advancing slider, Nelson’s phased out the sinker, which he relied on heavily last year. The latter pitch posted an inflated .361 BABIP in 2014, and has become even worse in that regard (.376) in 2015; it’s also stagnated by whiffs, inducing them for about six percent of its usage across both campaigns. Its grounder- and strike-accumulating ability notwithstanding, the sinker just hasn’t justified its place as a primary hard pitch.

The four-seam fastball, on the other hand, has shone in the spotlight:

It has gone airborne a bit more often this year, and has fallen behind a bit in terms of strikes, but it’s atoned for that elsewhere, by racking up whiffs and preventing hits. The velocity or movement hasn’t notably changed, nor has the location moved—here, Nelson simply needed to take advantage of what he had. The four-seamer’s enhancement has combined with the aforementioned curveball and slider to revamp Nelson’s pitching.

Nelson shouldn’t stop here, though. He can continue to grow in a number of areas—namely, holding runners. Opponents have stolen 13 bases against him in 167 chances to do so, which has given him one of the worst Takeoff Rates in the majors, at 10.1 percent. A Jon Lester-esque lack of effort hasn’t hurt him: His 71 pickoff attempts rank only behind Fiers and Clayton Kershaw in the NL. He simply can’t keep hitters honest; working on this facet of his game would help him to prevent runners from scoring, and would thus further improve his performance.

And, of course, Nelson still has work left to do for the batters at the plate. If he continues developing his sinker, or improves the control on his curveball, those two pitches could fully substantiate the deadly fastball-slider combination that has so excelled for him. None of his pitches have given him many looking strikes; pairing those with his swing-and-miss stuff might make him the star of the Milwaukee staff.

After Nelson’s volatile 2013 season, which saw him succeed at Double-A but hit a wall at Triple-A, the future didn’t look particularly promising. His showing to that point had him pegged as a no. 4 starter in terms of both potential and future value, which is about where he finds himself at the moment. The pieces have all come forward, though, and Nelson has already demonstrated his ability to improve from one season to the next. Should he stay on this course, the Brewers could have something close to a new no. 1.