For a lot of the talk-radio circuit, “clutch” ability dictates a player’s worth. These types of fans evaluate the athlete thusly: If he excels in the trying times, he clearly ranks among the game’s elite; if he crumbles when the going gets tough, then he belongs in the minors. This mindset, induced by confirmation bias and all-around stupidity, nevertheless raises an interesting point. Can some players — specifically, the ones on the mound — consistently perform well or poorly in so-called pressure situations?

The league-average pitcher, in any given year, will post a wOBA about ten points worse with runners on base than he’ll put up when he’s alone on the mound. This fluctuates a bit by season, but generally holds true for every one: 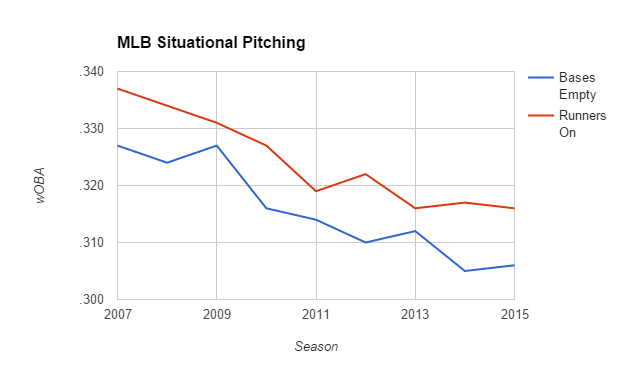 As with virtually everything in baseball, though, some hurlers defy this — in both directions. Ricky Nolasco, for example, owns a wOBA of .321 all-time before anyone has reached base, and a wOBA of .337 once that has occurred. Jeremy Bonderman’s career .344 mark with one or more bag occupied dwarfs his .329 figure with the sacks clear. Because of their deficiencies in these (for lack of a better word) pressure situations, which could come as the result of multiple things, they’ve never stranded many runners.

On the flipside, we find names such as Mark Buehrle, whose extensive major-league career has featured a .322 wOBA with the bases empty and a .319 wOBA with men on base, and Johan Santana, who held the opposition to respective wOBAs of .283 and .277 in those scenarios. Players who fit this mold can consistently prevent their baserunners from scoring and can thus compile better results than their peripherals might suggest.

Enter Taylor Jungmann. The Milwaukee rookie has, by runs allowed (and several other metrics), been the team’s best starting pitcher this season. Since he never did this well in the minors, however, many have doubted that he’ll sustain it. Clearly, his true-talent ERA doesn’t sit in the low twos; with that said, there’s reason to believe — based on what he’s shown us thus far in the majors — that he could continue to surpass expectations.

In his 59.2 innings this season, Jungmann has stranded 81.3 percent of the hitters that have reached base against him. Considering that the average pitcher leaves on 73.4 percent, many will deem this mark a fluke. And yet, Jungmann has done a lot to show that he deserves it — like the aforementioned overperformers, he’s done better with runners on against him:

What’s more, his peripherals have improved in those situations as well. In the three true outcomes — strikeouts, walks, and home runs, the former two of which typically worsen significantly with men on base — Jungmann has been a different pitcher depending on the circumstances:

This sort of play suggests that Jungmann must have something going for him. He told Tom Haudricourt that growing up and developing in Texas — where, you know, everything’s big — has helped him stay cool under pressure. Perhaps his formative years did grant him greater composure; he obviously knows himself better than I know him. But from what I’ve seen on Brooks Baseball and Baseball Savant, I’d say that his pitch usage and location have probably played a role.

First, let’s look at Jungmann’s situational repertoire. Brooks gives the option of a pitch breakdown by base state, and taking advantage of that reveals this interesting trend:

The sinker has yielded the most grounders for Jungmann in 2015 — racking them up at a 70.0 percent clip — and has yet to go for a long ball, so it makes sense that he’d nearly double its usage in critical moments. Meanwhile, hitters have swung-and-missed more often against the curveball (16.4 percent of the time) than against any other pitch Jungmann possesses, making it the offering he relies upon most when he needs a clutch strikeout. As far as arsenal adjustments go, these are pretty major. If Jungmann keeps them up, one figures that he’ll likely keep up the disparate situational output too.

But it doesn’t end there. Jungmann has shifted the placement of his pitches as well as the selection thereof. With no one on base, he hits most areas of the strike zone, generally staying low but occasionally throwing high: 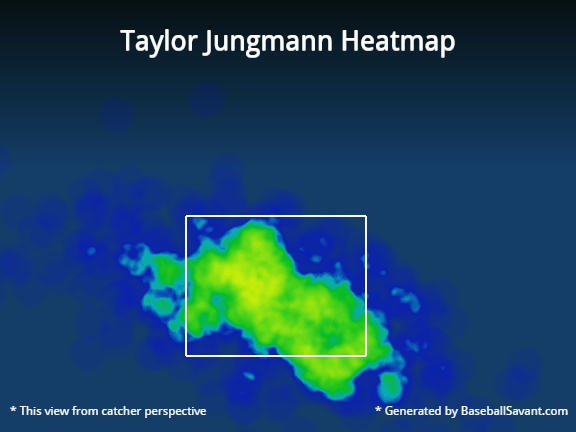 When pitching out of the stretch, though, he moves the whole thing downward: 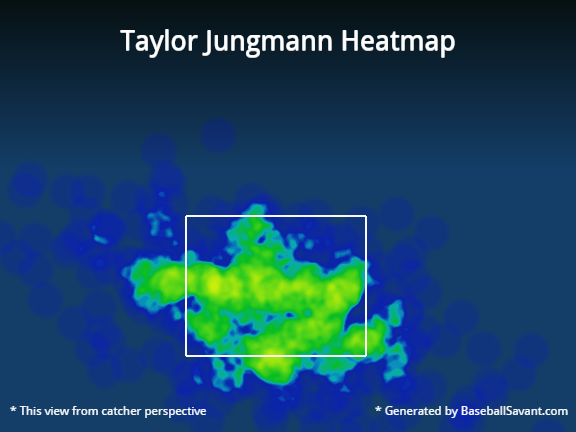 This approach has a lot to do with the fact that he’s only sacrificed solo home runs so far. Taken with the fact that his lower pitches have caused more whiffs than their higher counterparts, this shines some additional light on his skill with men on base.

Jungmann has changed his entire strategy based on the context in which he pitches, and uncoincidentally, his production differs vastly by situation. He won’t maintain a strand rate above 80 percent for the duration of his time in the show, just as he won’t preserve a sub-3.00 ERA, but something in the mid-70s could certainly happen. Continuing this would allow Jungmann to leave runners on base with ease, making him an overperformer, and consequently an underrated pitcher.

Very little good has come out of the Brewers’ 2015 rotation. At this point, regardless of what happens in the final two months of the season, we can probably chalk up Jungmann’s effort as a positive and hope that he won’t miss a beat in 2016 and beyond. The components for success are there. Jungmann just has to stick with them.