Every year tons of trades are made. The statement is, of course, not revelatory, but it seems that every team has a preferred team with whom they like to trade. Why this is the case is not always clear. Maybe both GMs have similar philosophies, maybe there’s a former front-office member that can help with the dialogue, maybe both teams needs fit each other’s. It’s also highly possible that two GMs simply get along well, which allows for smoother dialogue. Whatever the case is, however, teams rarely make trades within their own division.

TRADING IN THE DIVISON

It’s a popular narrative and one that’s brought up just about every year. There’s a potential beneficial trade scenario between two teams within the same division and yet the trade doesn’t happen. The cause is, therefore, typically attributed to the idea that teams don’t like to trade within the same division. The narrative isn’t totally false. Since 1998, teams have traded with their divisional rivals only 10 percent of the time.

This year, as Mike Bates pointed out, the trade season started with teams making trades with their division rivals. The A’s sent Scott Kazmir to the Astros for Daniel Mengden, and Jacob Nottingham. And the Brewers shipped Aramis Ramirez to the Pirates for Yhonathan Barrios, a 5-foot-11 hard-throwing reliever who is currently in Double-A Biloxi and is sporting a 3.15 ERA in twenty innings.

One of the main reasons teams don’t often trade within their division is that most teams are afraid they’ll trade a young prospect, who will blossom with another organization. The fear isn’t without merit, as the GM could come under a lot of scrutiny if that player comes back to haunt him.

This year, as has already been noted, the Brewers haven’t been afraid to make those types of trades. They made the Ramirez trade, and at the trade deadline, they traded Jonathan Broxton to the Cardinals. Both teams who can easily fit the label as rivals. But the Brewers might not be done trading in the division this season.

Adam Lind could still prove to be an interesting fit for the Pirates at the end of the season. Sure, Michael Morse has hit well since joining the Pirates, but his BABIP is .464, which is obviously unsustainable and he should be in line for a lot of regression. Therefore, in the offseason the Pirates will yet again find themselves with a whole at first base, which could definitely be filled with Lind.

Now, while the Brewers made a couple trades with teams in their division, it doesn’t mean they’re likely or even willing to do it again. I, therefore, wanted to see how often the Brewers made trades in their own division, as compared to the rest of the league. For this I gathered the data at baseball reference, which as I’ve already noted does not include minors for minor’s trades. The data also does not include waiver claims or player signings. All it includes is trades and purchases. I also only went back to 1998 because before then the divisions were in a different format. The Brewers, before 1998, were actually in the American League and shared a division with the Royals, Indians, Twins, and White Sox. The Brewers now share a division with the Cubs, Reds, Cardinals, and Pirates. They did share a division with the Astros until 2012 when the Astros moved to the American League. I, therefore, only included the Astros trades with the Brewers and other teams in the NL Central from 1998 to 2012. After 2012, I counted the Astros trades with the AL West. 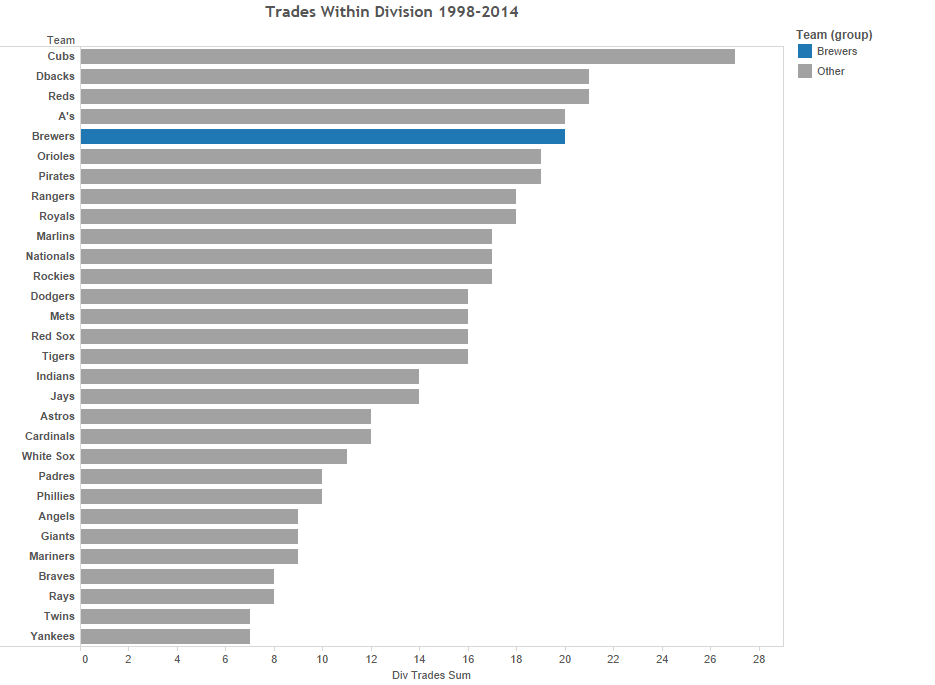 From 1998 to 2014, the Brewers made 20 trades within their own division, which ranks them fifth in all of baseball. The team that made the most trades within it’s own division, ironically enough is the Cubs, which whom the Brewers haven’t traded with since 2005. In fact, the only teams whom the Brewers haven’t traded with since 2005 are the White Sox, Rockies, and Marlins. That being said, the Brewers seem to be pretty progressive, as compared to the rest of the league when it comes to trading within the division.

But, there are problems with the methodology I used, in that I only looked at the overall trades teams made in the division. The main problem being, what if a team simply doesn’t make a lot of trades? If that were the case, then it wouldn’t be weird that the team in question didn’t make a lot of trades within its division. To account for this I looked at the team’s percentage of trades that they made inside their own division. 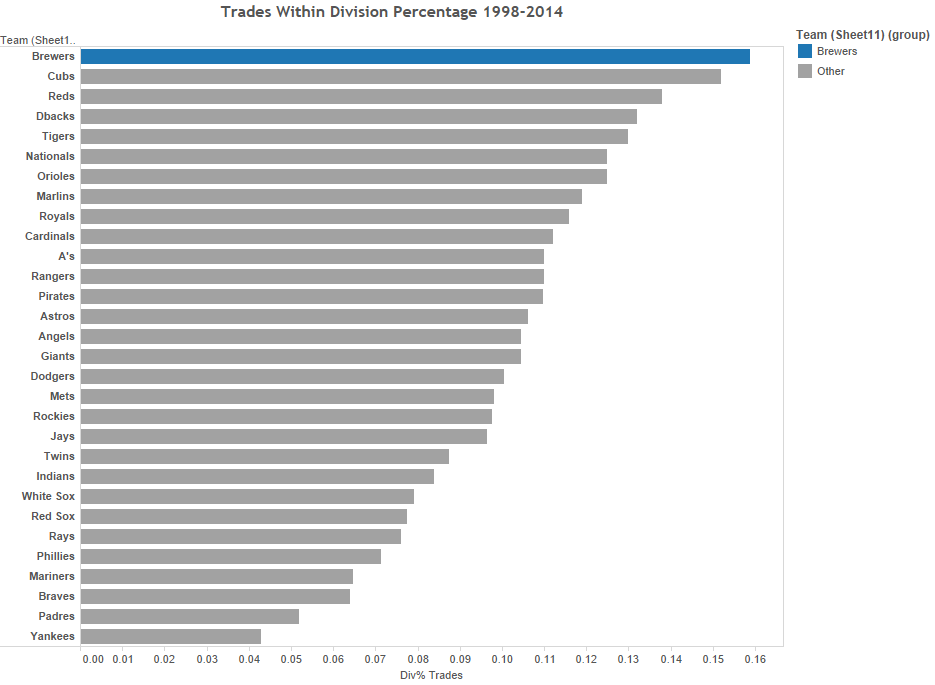 This makes the Brewers look even more progressive. At 15.87 percent, they’ve made the most trades in their own division dating back to 1998. Whether this is an organizational philosophy, I do not know. This also doesn’t mean that the Brewers will definitely make a trade in their division this upcoming offseason. Rather what this does suggest is that the Brewers should be open to the idea, or at least that they will be as open as any team in the bigs — even with the change in GM.

WHO DO THE BREWERS TRADE THE MOST WITH?

So often, when gathering data, one question will lead to another and then another. One question that arose from gathering this data was with which teams do the Brewers trade the most often. As I’ve mentioned before, teams will often be more comfortable trading with other teams based on several factors. Again, using the data from baseball reference I looked at which teams the Brewers made the most trades with from 1998-2014 and then again from 1969-2014. 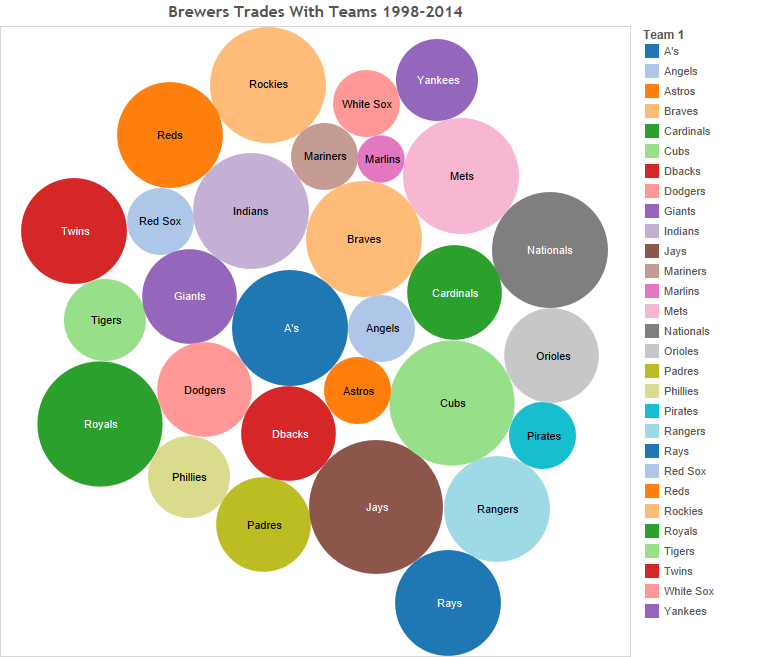 Even though the Brewers haven’t traded with the Cubs since 2005, they’re the team they’ve had the second highest amount of trade transactions with since 1998. The Cardinals and Reds on the other hand are more in the middle of the pack, while the Astros and Pirates, with whom the Brewers have only made two trades since 1998, are near the bottom. (This of course does not count this year’s trades.)

Let’s now look at all the trades the Brewers made since they’ve entered the league. 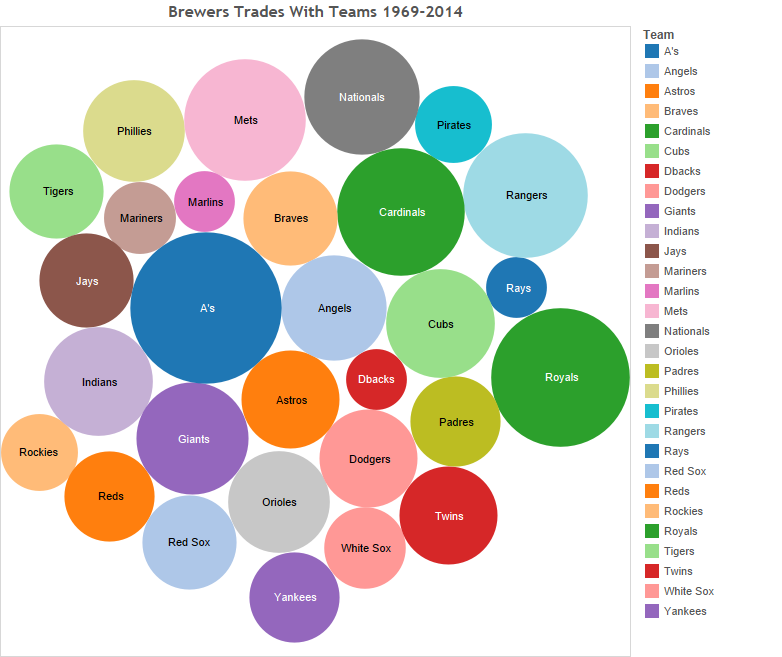 Here is a visual look of the Brewers trades from 1998 to 2014 along with the league average. 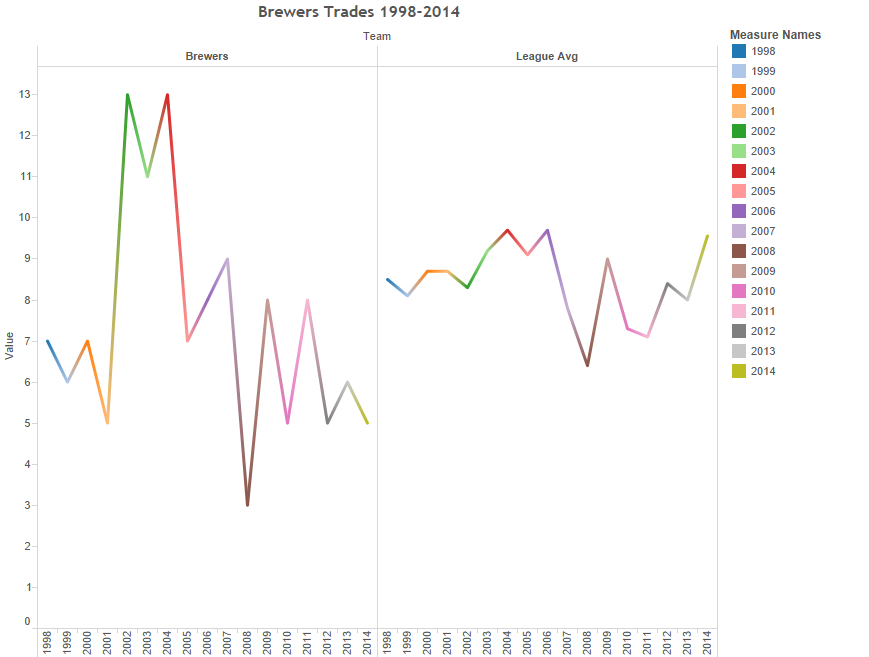 This isn’t the first time I’ve shown this visual for the Brewers. Again they’re trending downward, when it comes to trades, while the league average is trending up. In 2014, the Brewers made five trades, while on average teams made 9.56 trades. This may be due to the number of new and younger GMs entering the league.

It’ll be interesting to see who Melvin’s successor will be, and if he will be more active than Melvin has been in the recent years.