If you’ve watched the Brewers play baseball in September, you’ve probably seen Jason Rogers do something like this:

Or perhaps you’ve seen him do something like this:

Needless to say, Jason Rogers is having a great September. He has compiled a tremendous .488/.553/.707 slash line.

Before this month, though, if you’re not an avid Brewers fan, you may not have ever heard of Jason Rogers. That’s likely partially due to the fact that he was never considered a top prospect. He never made any of Baseball Prospectus’ team-level top-10 prospects lists for the Brewers.

Rogers was drafted, by the Brewers, in the 32nd round of the 2010 draft out of Columbus State University. He started his minor-league career at the age of 22 and slowly moved up the ranks. His minor-league numbers illustrate that he has hit well at just about every level. He was even called up last year to make his major-league debut at the age of 26. The young man only had a brief stint in the big leagues, though, only playing in eight games and only netting 10 plate appearances.

This year, Rogers made the major-league club right out of camp, and he has performed for the most part, although in a limited role. Many keen readers probably know this, but Rogers doesn’t profile as an everyday player. He has mostly filled in at first base, while seeing some time at third base and in left field. Mainly, though, Rogers is used for his bat, and he’s somewhat developed a reputation as being the team’s best pitch hitter. Whether that is true is certainly debatable, but what isn’t is that he’s been very effective out of that role, accumulating a 127 wRC+ off the bench. He has also received the most plate appearances as a pinch-hitter among all Brewers players. If it weren’t for that meddling Skip Schumaker, he would have the most pinch-hit appearances in all of baseball for 2015.

With that being said, it would be an understatement to limit Rogers’ accomplishments this year to his pinch-hitting. He did get demoted to Triple-A in July after having a rough June, but after crushing it in Colorado Springs, he got called back up to the majors on August 7. On the whole, Rogers has been one of the Brewers better hitters, and if we rank it by wRC+, only Ryan Braun has been superior on the Brewers this year (min 100 PA).

While from these numbers alone there might be a case for Rogers to get a starting gig at first base next year — especially if the Brewers end up trading Adam Lind — his month of September might be his best claim. We’ve already discussed the slash line and looked at a couple of pretty home runs, but now let’s try and examine just how good Rogers has been this month. Mainly, we’ll be examining his hitting.

First of all, I think this goes basically without saying, but Rogers is having the best September of any Brewer, at least at the plate. Now, let’s compare Rogers’ September historically to other Brewers’ September performances. (Min. 40 PA)

You may be wondering why I stopped at 1974. The data was collected from FanGraphs and after 1974 the option of looking at the month of September was not available or did not work when I was looking at it. 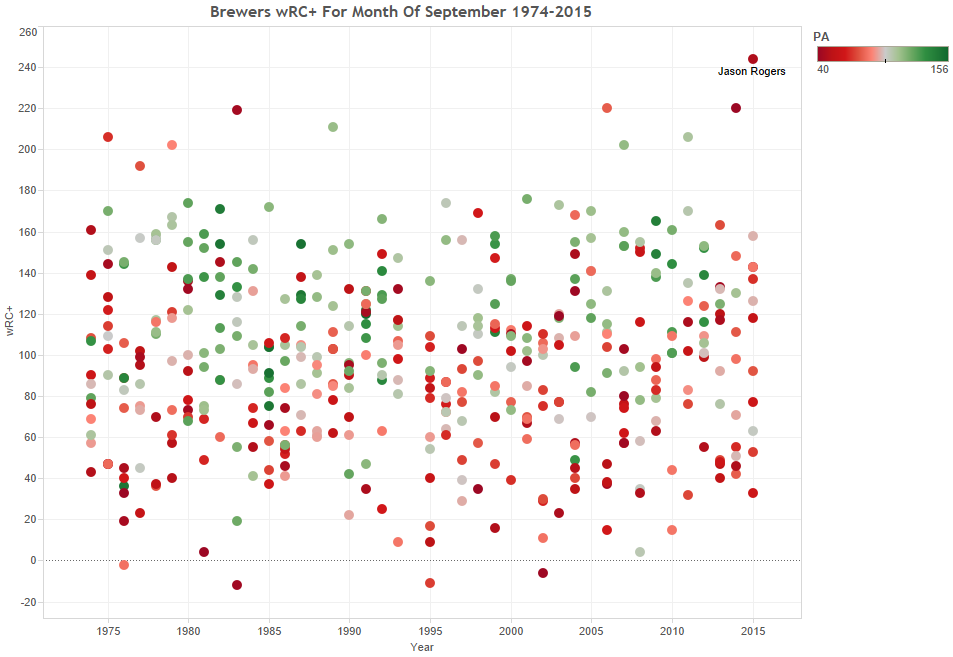 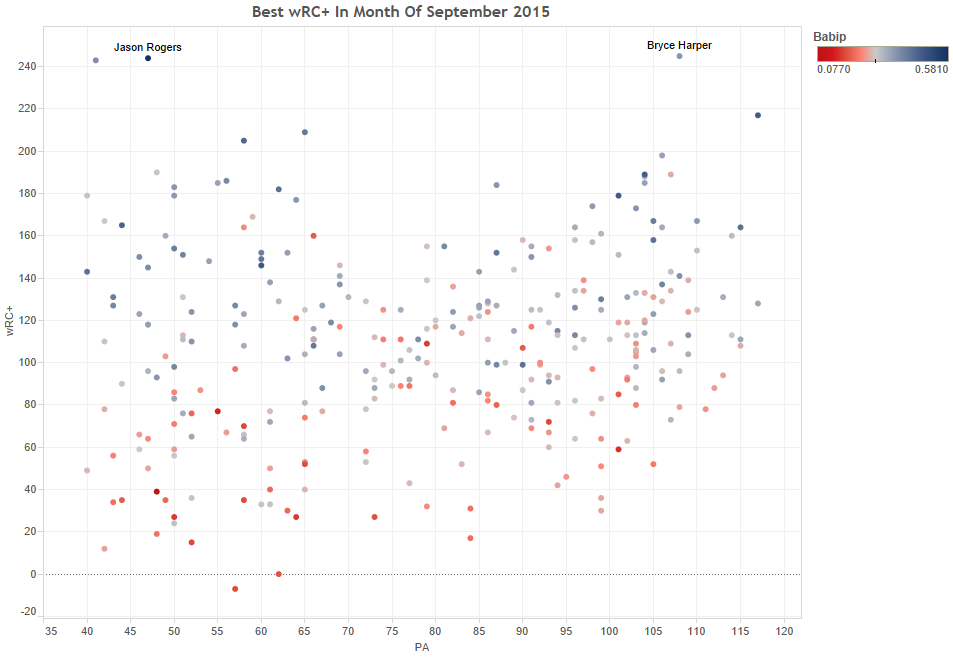 This September, the only player to have accumulated a better wRC+ than Rogers is Bryce Harper, and his 245 wRC+ is only one point better than Rogers’ 244 wRC+. One can again see pretty clearly the discrepancy in plate appearances. Bryce Harper not only has the highest wRC+ in all of baseball, but he’s doing it with a ton of plate appearances. Harper is also accumulating this production on a somewhat reasonable BABIP, while Rogers has a very high BABIP, as his dot is in dark blue. (The bluer the dot the higher the BABIP, the redder the dot the lower the BABIP.)

This is, of course, not to denigrate or minimize Rogers’ accomplishment. He’s having a great September, small sample size and BABIP be damned. All of this isn’t to suggest that this is Rogers’ true talent. It’s obviously not. But it is nice to see a player — especially one who few thought would end up being successful — have success in the big leagues, even if it’s only for a short amount of time. Spending just one year in the majors can change a player’s life — financially, and in many other ways.

What might be even better to note is that due to Rogers’ success this year and this month, he just might have earned himself a full-time look for next season, especially if the Brewers trade Adam Lind. If the Brewers trade their current first baseman, there would be an open spot. And if the plan is to rebuild, it probably wouldn’t hurt to give Rogers a legitimate shot at the position next year.