In a tumultuous year for the Milwaukee Brewers, Adam Lind has proven to be one of the few bright spots. He’s provided solid production for the organization from a position that has been laughably unproductive in years past. Lind, however, will be a free agent at the end of the 2016 season, so if the Brewers are looking aggressively continue their reboot, he could become a prime candidate on the trade market. The goal would be to accumulate more prospects and accelerate the rebuilding process.

In all probability, it would be a huge surprise if Lind wasn’t traded this offseason. The hire of David Stearns, former Astros assistant general manager, seems to suggest that the Brewers are going all in for the rebuild. The Brewers’ first baseman should have solid trade value, but it might not be as good as one thinks.

First, however, let’s look at Lind in a historical context, comparing his offensive production to other Brewers yearly hitting performances since 1969. (Min 300 PA). The blue dot is Lind. 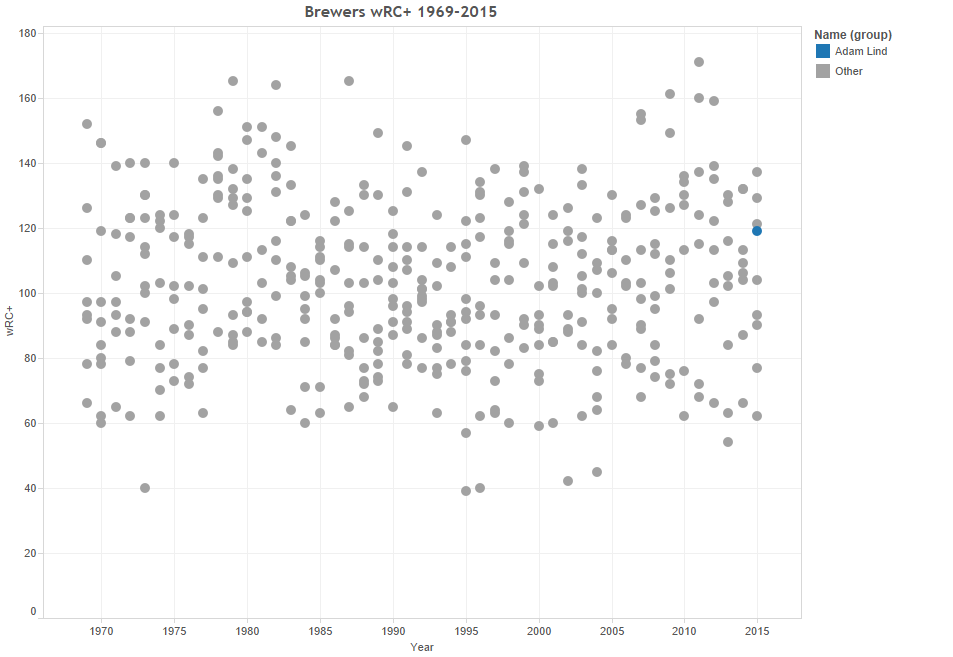 Therefore, in order to get a better representation of Lind’s season, in historical context, we need to compare him to other Brewers first basemen. I created a boxplot to better show Lind’s season as compared to others.

Basically, the boxplot depicts the distribution between the data. As you can tell, Lind is smack dab in the middle. The median of the plot is 119 wRC+, which is the exact same production as Lind brought to the organization this year. Just for some perspective — and it might be hard to tell — the two dots at the top of the boxplot are Prince Fielder’s 2009 and 2011 seasons. In fact, even though Lind had a solid season, Fielder only had one season where he compiled a lower wRC+ than what Lind did in 2015. It’s often hard to appreciate great players when they’re on the team for which one roots. Fielder often got criticized for his weight and defensive ability, but when it came to hitting, no first baseman was better in Brewers history. (The biggest outlier in the group is Yuniesky Betancourt’s awful 2013 campaign at first base where he accumulated a wRC+ of 54 in 409 plate appearances.)

All this, though, isn’t to suggest that Lind had a bad season, but rather that it requires a great hitter to perform at an above-average level at the first base position.

This production comparison above, though, is limited to Brewers players. It is also somewhat outdated since many of the players are no longer active. Thus, it doesn’t necessarily give us a good sense of Lind’s current positional standing in the game.

Here is Lind’s offensive production as compared to the remainder of the league in 2015.

This year Lind had the 16th best offensive production among the 39 first basemen who accumulated at least 300 PA. He’s in the upper quartile of the boxplot. It’s, therefore, pretty evident that Lind proved to be an above-average first baseman this past year, at least with the bat.

When it comes to his defense, he’s shown that he can play an adequate first base this year. He’ll never win a gold glove award, but at the same time, he’s no Hanley Ramirez. He’s not going to kill you out in the field. He’s going to provide solid, yet not great, production which helps his overall value.

With that being said, there is still one major flaw in Lind’s game.

If you’ve seen Lind play this year, you’ve probably seen him do this against righties.

You’ve probably also seen Lind do this against lefties.

Yes, Adam Lind has been distinctively poor against lefties all year. Just how poor? Well, let’s take a look. 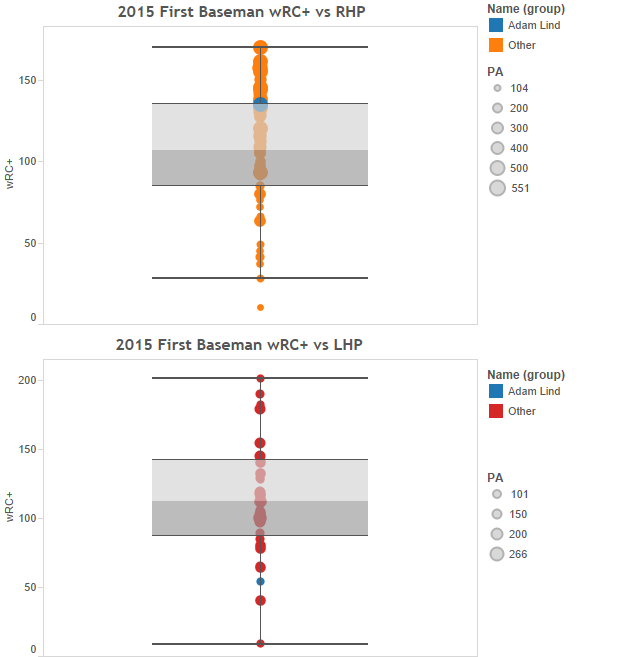 The biggest problem is that this isn’t a one-year aberration. The 32-year-old has never had success against left-handed pitchers, to the point where in 2014 the Blue Jays only gave Lind 37 plate appearances against southpaws.

This, consequently, hurts what the Brewers could get in a trade for Lind. The hypothetical team acquiring him would also be securing him on a one-year deal, and, therefore, would almost certainly need to have playoff aspirations. The good news is that there won’t be a lot of quality first baseman’s on the free agent market this winter. The biggest name will be Chris Davis, and Lind will almost certainly be the cheaper option.

There should also be a real market for Lind. Going under the assumption that the Rays, Mariners, Nationals, and Pirates will try to be contenders next year, they could all use Lind’s bat at first base. None of them have a viable option at first base. The Nationals have Ryan Zimmerman, but he’s often injured and at this point is only successful against left-handed pitchers. Lind could, therefore, provide a good platoon split for the Nationals. But at the core that illustrates the problem with Lind’s overall value.

He’s a cheap first baseman that should be used in a platoon role. Granted, we’re talking right-handed platoon, which is obviously better than a left-handed platoon, but at the end of the day it’s still a platoon role. If people are expecting the Brewers to get a top-tier prospect or a big haul for Lind, that’s probably not going to happen. The Brewers will likely end up with a solid second-tier prospect at best if the tables align right.

Adam Lind is a good player, but he’s a fill-in piece on a contending team. He’s not a star or a franchise-altering player. He’ll provide a useful left-handed bat, which has value — but not a ton of it, especially considering that he’s limited to playing first base or DH.