Yes, another season of baseball has come and gone and more pitchers have fallen under the knife. Up to this point in 2015, a total of 104 players have had the surgery. I say players and not pitchers, because as you probably already know position players can suffer this injury as well. In fact, 10 of the 104 players who have suffered Tommy John surgery this year have been position players.

The Brewers players are not immune to this type of injury. This year, Milwaukee has seen a couple of their pitchers undergo the surgery. Most notably was Nathan Kirby, their second pick in the latest amateur draft. This was not unexpected, though. The Brewers were initially set to sign Kirby to a $1,545,400 bonus, but it was reduced to a $1.25 million bonus due to medical reports. Doug Melvin even mentioned that there is always some kind of risk when drafting a pitcher, “It’s somewhat expected with some guys coming out of the draft now.”

That being said, while the Brewers have had to deal with some Tommy John surgeries this year, it’s not nearly as bad as some other teams. Take, for example, the New York Mets. Zack Wheeler was poised to be one of the main starters for the team; instead, he had elbow issues at the beginning of the season, had the surgery, and missed the entire season. Then there was the whole Matt Harvey saga — whether he would pitch or not. That question, however, has seemingly been answered for us, but it was an ongoing discussion throughout the year and leading into the postseason.

This is one of the biggest problems now with building a team. A front office can assemble a great rotation, just like the Mets have done, and take the risk that your starters won’t get the surgery. Or, you can build your team through hitters, just as the Cubs have done, which should provide less injury risk.

For the Brewers, this will be an interesting question as to how they should rebuild, and whether or not they want to go through the pitching route. Thus far, however, both teams have benefitted from their rebuilding strategies. Well, at this point perhaps the Mets have benefitted a little more.

The Brewers, for the most part, have not had to deal with a ton of Tommy John surgeries, at least when one compares them to the rest of the league. 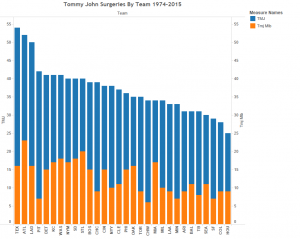 As you can see, though, the graph also shows the number of major-league players who have suffered the surgery by team. In that respect, the Brewers are tied in 18th place with the Yankees with 10 Tommy John surgeries had by their major-league pitchers since 1974.

At the present moment, this seems like a good omen for the Brewers. They’re not associated with the Texas Rangers or the Atlanta Braves, whom both teams has been decimated by the injury. With that being said, whether preventing the surgery is an actual skill for the Brewers, or just random chance, will still have to be seen.

While this all seems to be well and nice, one topic is still bothering me.

The theme of the Tommy John surgery is often discussed at the beginning of the season. Now, in October, the subject is almost never broached, which is nice as it allows us to focus more on baseball rather than pitcher injuries.

But it does bode the question, why this is the case? Are we simply too focused on the playoffs to pay attention to the issue? Or, are there simply fewer surgeries happening at this time? This would make sense, intuitively. There are fewer pitchers pitching, therefore, fewer pitchers are bound to get injured and henceforth fewer pitchers will have the surgery.

This all seems to make sense, so let’s investigate.

Using the database created by Jon Roegele and Jeff Zimmerman, I looked at which month pitchers would most often get the surgery since 1974, which is when the surgery was first performed. Here are the results. (The database is consistently being updated by Roegele, and can be found here.) 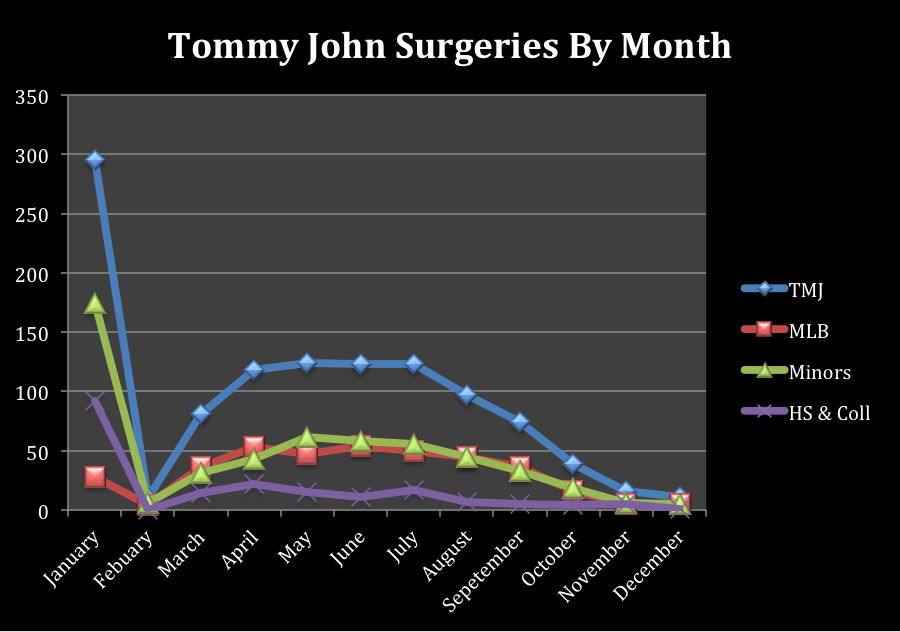 It’s pretty clear from the data that most Tommy John surgeries occur in the month of January. Then follows a stretch of four months, April, May, June, and July where teams sit back and nervously watch their pitchers pitch, as they pray that they won’t see one grimacing in pain. That being said, oddly enough, this doesn’t fit the narrative, as January is not a month when most discussions about the surgery occur.

This is probably due to the fact that most major-league pitchers fall under the knife in April and June. Both of those months have the highest number of major league pitchers getting the surgery, at 54 for June and 53 for the month of July.

When it comes to the Brewers, the story, doesn’t change all that much. 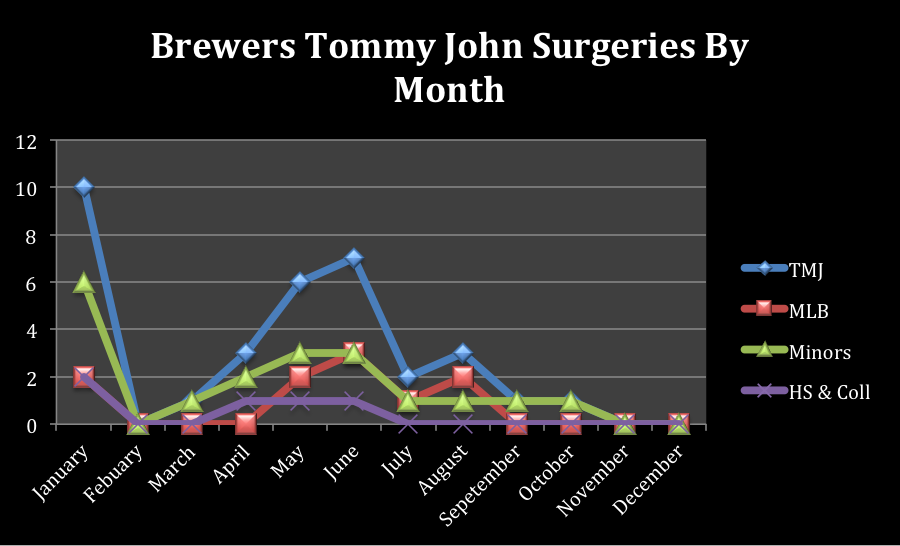 The effects and gravity of the surgery have already been well documented. The surgery, while the success rate is trending upwards, is not a joke, and researchers have said that getting the surgery should not be something pitchers should look forward to doing. It should be a last resort.

This doesn’t mean that pitchers should ignore the signs that they need the surgery, but rather that pitchers should not think that the surgery will fix all of their problems and they should not assume they would come back better than ever. Pitchers who have had the surgery actually tend to pitch fewer innings than pitchers who haven’t. They also tend to be more likely to getting injured again. As the best indicator for pitcher injuries is still whether or not they have been injured.

[Editor’s Note: Jon Roegele reached out to say that all Tommy John surgeries with unknown dates are coded as January 1 of a specific year. That throws off the monthly data rather significantly.]