On September 8th, Jonathan Lucroy took a foul ball of the mask, which resulted in him suffering a concussion. In addition, Lucroy had one of the worst seasons of his career. He not only had problems with his catcher framing, but he also only managed to achieve a .254 TAv — something which hadn’t been that low since 2011. This all ended up with Lucroy compiling the second-worst WARP of his career, and part of the problem was the number of injuries he suffered.

Earlier in the year, Lucroy suffered a broken left toe. This landed him on the 15-day DL and caused him to spend 41 days on the DL. When Lucroy first came back from the injury, he struggled, posting a .671 OPS in the month of June (Lucroy came off the DL June 1). He then, however, started picking up his play, sporting a .773 OPS in July and a .855 OPS in August. Then, when it finally seemed as though Lucroy was turning things around, he suffered his concussion, which forced him to miss 15 days.

For Lucroy, this was his first brain injury (according to my database). Concussions are a serious injury, and, unfortunately, they seem to affect catchers more than anyone else.

Back in May, I introduced a concussions database that I had been working on. At the time, I only found 189 concussions. Now, the database has 246 concussions and goes back to 1908, although only 22 concussions were found after 2000. The problem, again, is that there simply isn’t a lot of places to find the data. Most of the information found outside of 2000 were from news and SABR articles. The information from 2000 to 2015, for the most part, comes from pro sports transactions. Here is a quick look at the trend from 2000 to 2015. 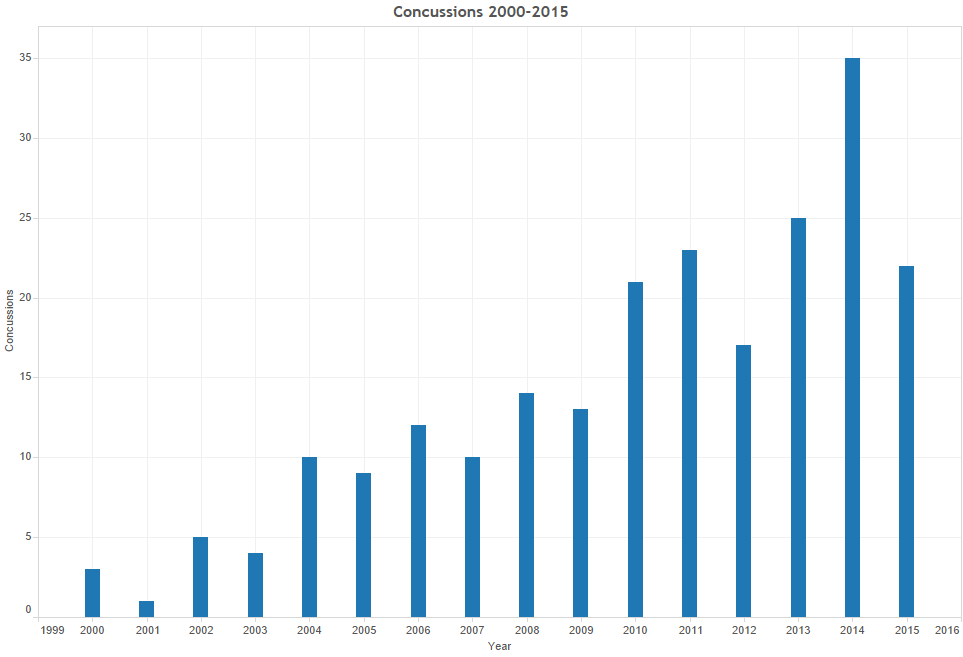 Clearly, thus far there is a significant drop off in concussions in 2015. The year isn’t over, however, therefore I might be able to find added information.

Mainly, though, as mentioned before, concussions affect catchers. This shouldn’t be surprising a statement. Catchers are stuck in a vulnerable position. The pitcher throws a ball at 90+ miles per hour, the batter swings and the catcher has a very short period of time to react, especially if the ball is fouled off the bat. We saw this a number of times in the playoffs with Salvador Perez, even though he was never diagnosed with a concussion. Perez often got dinged up by fouled balls or back swings. These are only some of the factors where catchers can get injured and suffer concussions. 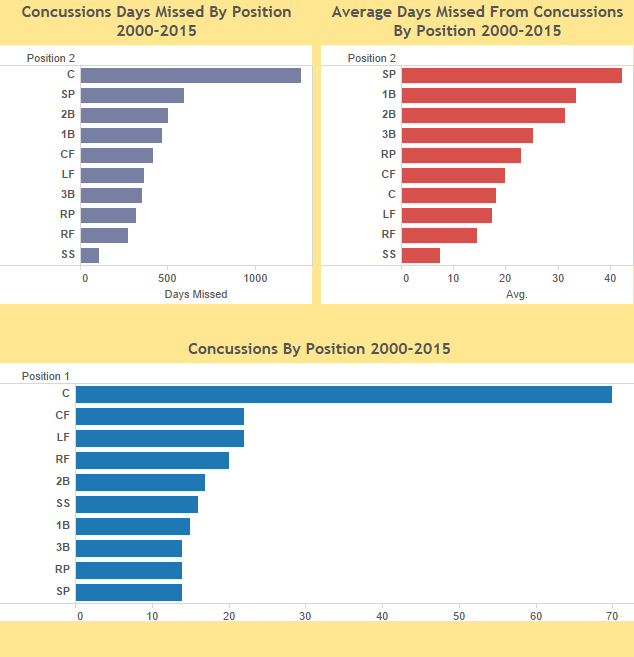 That being said, the number of days missed tells a different story. While a player might have suffered a concussion, it may not have been a major injury. Catchers are still at the top, but the second highest are now starting pitchers. Pitchers, for the most part, suffer concussions from comebackers. These are typically very serious and career threatening injuries, which is why they need to take a longer time off than let’s say a shortstop. Position players can suffer concussions from getting hit by a pitch, but most of the time they are wearing a helmet, pitchers, unfortunately, are not, and sometimes the speed of the ball coming off the bat can be faster than the ball as it came in.

One way to analyse the cause or why they get concussions is looking at how they get concussed. The cause was mainly accumulated through Rotoworld information and the baseball prospectus profile pages. The label of foul ball means the ball was fouled and the catcher was hit in the head or mask. If there needed to be added detail, it was put as a separate section, such as the foul ball on rehab section. (You might also notice that there are only 67 values in the table below, that’s because three of the catchers that suffered concussions, I wasn’t able to find the cause for their injury.)

These results once again aren’t surprising. Catchers have very little time to react between the time the ball is tipped and the time it hits their mask. It is far and away the biggest cause for catcher injuries as it incorporates 49.25 percent of the causes for concussions. Therefore, it’s no surprise that a foul ball to the mask was the result of Lucroy’s concussion. It’s an unfortunate part of the game that has no easy solution. Some catchers have played around with different masks. A few of them though have gone back to the “old school” masks. Stan Conte has done some research on which mask was better, which was documented in this article, “The Year of Living Most Dangerously”.

“Conte found that 208 of the catchers (80 percent) had tried both the hockey-style and conventional masks, but that only 49 (19 percent) were using the hockey-style mask regularly. Oddly, 71 percent said they thought the hockey mask was safer overall, though 54 percent thought the traditional model was better at absorbing foul tips. ‘When you get hit in a hockey mask, your head’s in a bucket, so it echoes and it sounds much louder,’ Conte says. ‘So the perception was that they were getting hit harder.’”

His survey also turned up evidence that many mild concussions were going undiagnosed: 26 percent of those surveyed said they’d experienced headaches related to foul tips, but most of the same respondents reported, perhaps inaccurately, that a foul tip had never given them a concussion.

We don’t have hard data on equipment preference today, though Conte plans to circulate a more scientific survey this season. However, anecdotal data suggests that the traditional model remains the primary choice.”

Concussions are no joke and having any kind of concussion is damaging the brain. For Lucroy, this is no exception. Even though Lucroy hasn’t suffered a tremendous amount of concussions, typically having one concussion makes one more likely to have another one. Thirteen of the catchers in my database have had multiple concussions. Alex Avila has had five. Other catchers have had their careers ended by concussions. Mike Matheny, comes to mind with this. It’s been reported that he has suffered as many as 25 concussions (I’ve only, unfortunately, been able to find one of those concussions.) The point, however, remains that a lot of concussions have gone undiagnosed.

Major League Baseball has implemented a new concussions protocol in 2011. Referring back to what I said in my first concussions article, the biggest change according to this Cash Karuth article “MLB, union adopt universal concussion policy” was the implementation of a seven-day disabled list for concussions. The protocol also forces teams to complete a “club-submitted ‘Return to Play’ form to Major League Baseball’s medical director. The submission of the form is required regardless of whether the player was placed on the disabled list.” This resulted in a spike in players landing on the seven-day DL.

That being said there is still a lot of data lacking on concussions, especially when it comes to post 2000 concussions. Concussions in baseball, even though they are not as common as the NFL, they still affect a number of athletes, especially catchers. Major League Baseball has made some good steps in concussions prevention, but being behind the plate still seems as a dangerous and daunting task. The catcher is always in a very vulnerable position and it may be the most unsafe position in all of baseball especially when it comes to concussions.