As the once-vivacious Brewers farm system dried up a few years ago, it had few bright spots. One of them, Khris Davis, made his mark in 2015, his second full season at the Major League level. He built off his rookie year accomplishments, betteringhis slash line to .247/.323/.505, which was good enough for a .286 TAv (remember: .260 is league-average). Even if his offense never progresses beyond this tier of production, he’ll still provide enough value to satisfy Milwaukee’s needs.

At times this past year, Khris Davis looked hopelessly terrible; for instance, he batted a sickly .186/.271/.349 over 48 plate appearances in July. He’s this sort of player (one who will sometimes get frigidly cold) can cost his team drastically. But those lower temperatures will often give way to devastating heat, which we saw during the remainder of the season. Derek Harvey (RIP) wrote in August about Davis’s torrid play in that month; he would finish it with a .228/.291/.576 line, which is flawed but somewhat representative of his ceiling.

In September, Davis surpassed everyone’s expectations. That month* saw him demolish baseballs. smashing his way to a .284/.350/.587 slash line — some of the best output in the league. That kind of vintage-Braun play over the course of a whole season would make him one of the best hitters in baseball.

[*As well as the first four days of October.]

By now, we all know that small samples can lead to crooked numbers such as these, and we thus regard them with appropriate skepticism. In Davis’s case, though, the production was truly bizarre — shown only the underlying peripherals, I would have assumed Davis had struggled in September, not dominated.

Let’s start with his batted-ball breakdown. Davis certainly clobbered the ball to conclude the season, making solid contact 35.5 percent of the time. However, that didn’t represent much of an improvement; he posted a 34.4 percent hard-hit rate for 2015 as a whole, in addition to a 34.9 percent mark in August. Plus, he made an unhealthy amount of weak contact — his September soft-hit rate of 22.1 percent easily topped his 17.9 percent clip overall. Someone with as little speed as Davis should need to square up the ball consistently to succeed, yet he managed to do the latter without the former.

The weirdness doesn’t end there. Davis saw his fly ball rate drop to 36.4 percent in the year’s final month, compared to 40.3 percent during the entire season. Because he’s always produced the most on flies — his .570 wOBA in that regard ranks sixth in the National League since 2013 — a decrease here should have doomed him. To make matters (theoretically) worse, his infield fly-ball rate spiked to 14.3 percent in September, nearly double his overall 7.3 percent figure. Despite fewer fly balls and more popups, Davis still maintained his stroke.

What’s more, the defining characteristic of his strong August disappeared. Harvey noted in the aforementioned article that Davis had pulled the ball excessively to fuel his late-summer surge. For whatever reason, however, he went to left field less often in September, at 41.6 percent of the time — more than ten percentage points lower than his 52.4 pull rate from the prior month. To put it simply, Davis abandoned the recipe that had helped him, while maintaining that formula’s top-notch results.

Pitchers gave Davis less to work with in September. In that period, he saw 50.8 percent fastballs, as opposed to 59.9 percent for 2015 as a whole. Davis has always crushed hard pitches, to the tune of 27.9 runs above average for his career. His -0.2 runs on other pitches has generally undermined that, but it didn’t have any effect as 2015 drew to a close. It wasn’t as though Davis suddenly developed a better eye — he whiffed at 19.2 percent of non-fastballs in September, in line with his 2015 whiff rate of 19.5 percent on such offerings. He just somehow changed things up for the better.

While Davis’s zone plot shows a clear trend, it doesn’t seem like one that would have benefited him:

When August ended, Davis started swinging more frequently at pitches down and away. He has always fared the worst in that area: 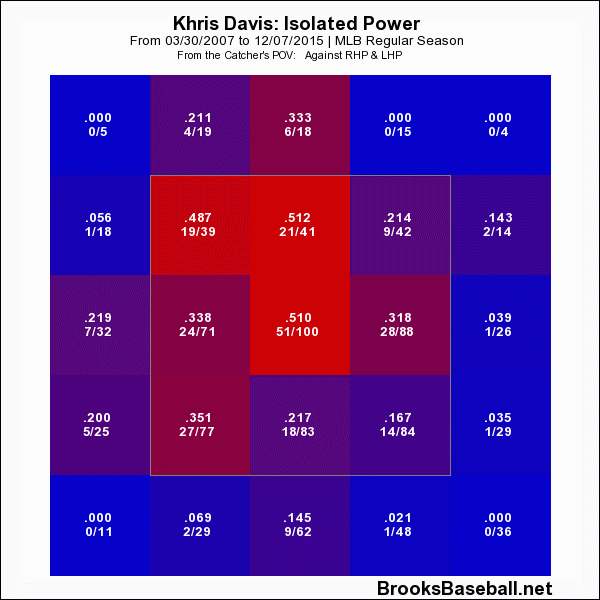 This held true during September of 2015, when most of Davis’s power (and average) came on pitches up and in. In the end, it makes for a tremendously unusual case.

Interestingly enough, Davis himself didn’t think he played at 100 percent to wrap up the year. On September 30th, he told Tom Hadricourt at the Milwaukee Journal Sentinel that he was “still not mentally all there,” as the lingering effects of his knee injury still inhibited him. Maybe after a full offseason of recovery, a healthy Davis will be able to stave off massive regression. We should certainly hope so, because this iteration of him was nothing more than a ridiculously fluky small-sample mirage.

With Domingo Santana, Brett Phillips and many more on the rise, the Brewers possess plenty of outfielders. If Davis could come anywhere close to replicating his September achievements in a larger sample, he would definitely beat out the competition. Sadly, that likely won’t happen. While Davis certainly has the potential to excel offensively, he didn’t tap into it this September.