Most don’t associate the Rule 5 Draft as a noteworthy event in baseball. Why should they? Typically, players who are drafted won’t even make the team in spring. They’ll either be traded for nothing important or returned to their original team. It’s also a pretty esoteric event in baseball. It occurs at the end of the Winter Meetings, and unless you’re a hardcore baseball fan, you probably don’t pay much attention to it. Heck, you might not even know about it. It’s not covered on ESPN. Even on MLB.com, it’s an audio-only stream.

One reason why the Rule 5 Draft is so obscure is that most players who are eligible to be selected during it aren’t very good. They rarely amount to anything significant, which makes sense, given the constraints of the event. For a player to be eligible, they must not be on a team’s 40-man roster. They must also have either signed at 18 or younger and have five years of professional experience, or signed at age 19 and have four years of professional experience. The player selected must then spend the entire season with the Major League team that selected him — in other words, the team which selected the player must retain him on the 25-man roster for the entire season. These players, most importantly, are often raw minor-league prospects, not refined enough for the challenges of the Major League level. Again, this is why most of these picks don’t pan out.

With all of that being said, some players do fall through the cracks and become significant big-league contributors. For example, Hall of Famers Roberto Clemente, Willie Hernandez, and George Bell were all Rule 5 Draft picks. As were, in recent years, Jose Bautista, Josh Hamilton, and Dan Uggla. Therefore, even though a team is probably not going to get a high-caliber player, it’s not a worthless exercise. It’s much like going to the casino with little money. Most of the time you’re probably going to lose the little you brought, but you have the tiny potential to win. And if you’re really lucky, you can win big.

This risk isn’t very useful for teams who want to compete. It simply doesn’t make much sense to give up a roster spot for a player who probably won’t immediately make a meaningful contribution. However, teams that aren’t sure contenders, like the 2016 Brewers, don’t have much to lose by drafting one of these players — which is probably one of the reasons why they drafted two players in the latest Rule 5 Draft. They first drafted Colin Walsh, a versatile defender from the Oakland Athletics, and the other was Zach Jones, a right-handed reliever in the Twins organization. In all likelihood, these players won’t pan out. But, if this haul of Rule 5 players is anything like the one we saw in 2014, the Brewers might have found a useful big leaguer.

Bryan Grosnick of Beyond the Box Score did quality analysis of the 2014 Rule 5 Draft. It was one of the best Rule 5 Drafts in recent memory. Mark Canha, Sean Gilmart, Delino Deshields, and Odubel Herrera all provided good value to their respective teams. What might be most impressive is that most players who were drafted were retained on the team, which doesn’t usually happen.

Below, I broke down just how good the 2014 draft class was. The data was gathered from The Baseball Cube and only goes back to 2006 because it represents the Rule 5 Draft as it’s presently constituted. I didn’t count a player who was returned to his team (for the WARP sections) unless that player produced some value before being returned.

When it comes to career WARP, the data obviously skews more towards the older drafts. Those players have had more time to accumulate a higher career WARP. With that being said, when you look at the WARP of the first year following the draft, the 2014 season stands out. It’s the second-best season for Rule 5 players since 2006. The 76.9 percent of players who stayed on the team after being drafted is also by far the highest.

The data can also serve as an unfriendly reminder that most of these players don’t end up producing a lot of value. If the player is good enough to make the team, it’s no guarantee that he will even provide positive value. Just take a look at all the negative WARP. The Brewers will hope to have better luck this year with the players they drafted.

But how have they done in previous Rule 5 Drafts? Below, the team was determined by the first team for which a guy played. For example, if a player was drafted by the Cubs and then traded to the Reds (hello, Josh Hamilton), then the value produced went to the Reds. 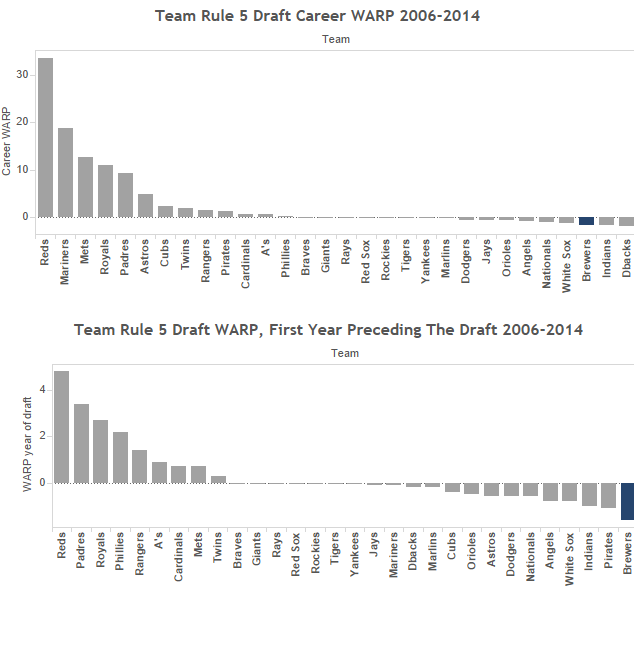 The short answer is that the Milwaukee Brewers haven’t done so well. Their Rule 5 picks have produced the worst WARP the first year following the draft and the third-worst career WARP. Granted, since 2006 they’ve only drafted five players and only one has stayed on the team (not including Chuck Lofgren, who the Brewers traded for to retain his rights). That was the 2013 pick, Wei-Chung Wang, who spent the vast majority of the 2015 season with the Brevard County High-A Ball team after struggling mightily in 2014.

This is by no means a representation of skill for the Brewers. As I’ve mentioned before, most of these draft picks don’t end up producing a lot of value. These are essentially lottery tickets, and the Brewers can only hope they’ll land on a good one this year.

The Brewers drafted a second baseman and a pitcher. These seem to be popular strategies in the Rule 5 Draft. (The position was determined as the position most often played throughout that player’s career). 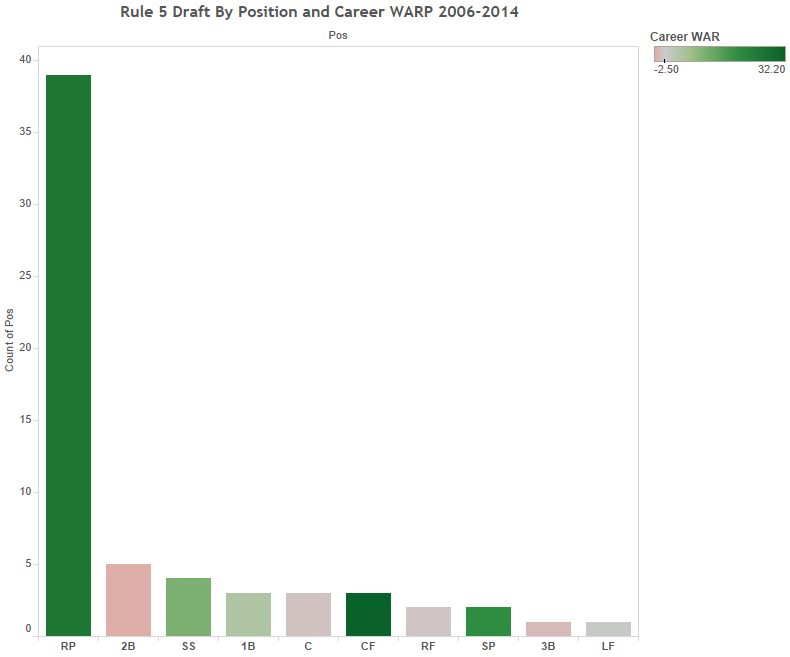 Most players drafted are relief pitchers. This makes sense — if a player is a starting pitcher or is projected to be a starting pitcher, he will probably be protected. Interestingly enough, the second position most commonly taken is second basemen. I’m not entirely sure why this is the case. It’s probably just random. But, perhaps teams end up drafting shortstop types, and the player can’t stick at that particular position. They are then moved, and seemingly most of them move to second base. Hypothetically speaking, of course.

What does seem to be clear is that taking pitchers pays off. Pitchers who ended up becoming relievers produced 25.8 WARP and starting pitchers produced 19.7 WARP. The main reason center fielder’s produced so much WARP is due to Josh Hamilton. He produced 27.7 of the 32.2 WARP.

While on the whole the Rule 5 drafts produce little value, teams such as the Brewers are in a great position to take a flyer on one of these players. They don’t lose much money and maybe they’ll end up with a valuable big leaguer. At the end of the day, it’s about accumulating as many quality players as possible and giving the clubs options in spring training. These players could then become quality assets that the Brewers can use when they’re able to compete again. Whether those players will be used as depth, quality big leaguers, or trade chips is unknown. But, if we’ve learned anything from the Adam Lind trade, it’s that Stearns is looking to build depth all throughout the system and by any means necessary. These Rule 5 picks are just another example of that strategy.