Prospects mess with our emotions. They make us smile, they make us cheer, they make us angry, and they often make us question our sanity. But, in many ways, that’s what makes them so much fun. It’s these emotions and the boundless hope prospects bring that engage us in such a visceral emotional attachment.

In this world of instant gratification, the initial reality can either be harsh or filled with exuberance. But that excitement is never quite as high, never quite as anxiety-inducing, as when that prospect makes his Major League debut. And not just any prospect, a top-100 prospect, one that has been analyzed and talked about for years. A prospect where the anticipation and build up is through the roof.

For the Brewers, that excitement might be met this year with the arrival of Orlando Arcia. The shortstop was ranked as the 93rd prospect in Baseball Prospectus’ Top-100 Prospects a year ago. He then jumped all the way to the 31st-best prospect in BP’s midseason Top 50. Plus, as Christopher Crawford and the BP prospect staff pointed out in their write-up of the Top 10 Brewers prospect, Arcia was one of the most improved offensive prospects in all of baseball. Crawford also told me that he expects Arcia to have an impact on the Brewers this season, “I think Arcia will make a significant impact this year. He’s one of the best shortstop prospects in baseball, and he has a chance to have three 60 tools when all is said and done. He’s not Correa or Corey Seager, but he has a great chance to be a really productive up-the-middle player this summer.” The Brewers are probably in for a rough season, but the arrival of Arcia will be a welcomed sight.

That being said, I wanted to look at what one can expect from top-100 prospects. More specifically, how do players who are on the Baseball Prospectus Top-100 rankings perform the same season. Arcia is surely going to end up on the Top-100 list for 2016, among other Brewers, and I wanted to see what one can expect. It didn’t matter whether the prospect had already made his debut, what I was interested in was looking at the prospects performances in the majors that same season. (Example, in 2007 Ryan Braun was ranked 12th in BP’s Top 100. That season he finished with a 5.2 WARP.)  I looked at their performance through WARP and went back to 2007, the first year BP started doing top-100 prospect rankings. I also looked at how many prospects played in the majors, of those who were on the list, and those prospects’ PA and IP. (For the past few years BP’s ranked 101 prospects. Since they haven’t been doing that from the start I only used the top-100 prospects.) 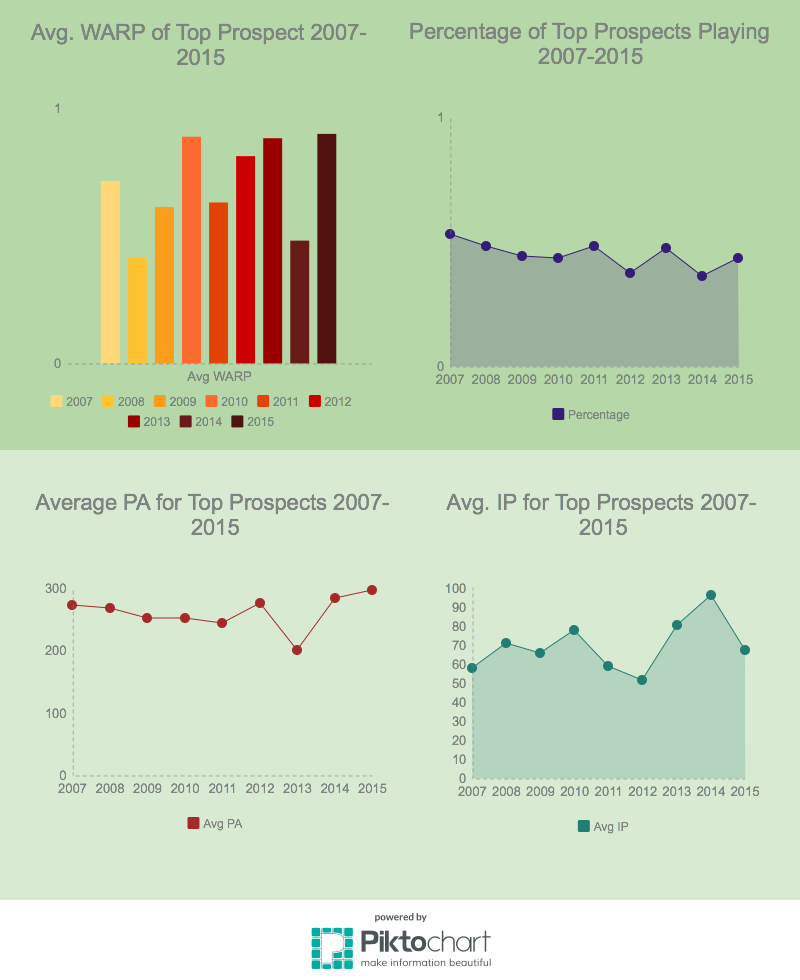 A lot has been written about the 2015 rookie class and just how historically great it was. But what made this class so special was not simply that the average rookie thrived, but that top-ranked prospects hit the ground running. In 2015, Top-100 Prospects averaged .897 WARP, which is the highest since BP started doing these prospect rankings. The second highest came in 2013, at .88 WARP.

Now, since were only looking at nine years of data, some might attribute these results to randomness or fluctuation. Maybe this prospect class really wasn’t conclusively more special than any other year. Crawford, though, would disagree with that: “2015 was definitely a special class, probably the best class I’ve seen in my time covering prospects. I think in those other years we were in more of a transition years — you see a lot of young prospects who were in the lower levels. Really though it’s a case of those classes just being special — particularly last year, these guys could be the building blocks of the league.” 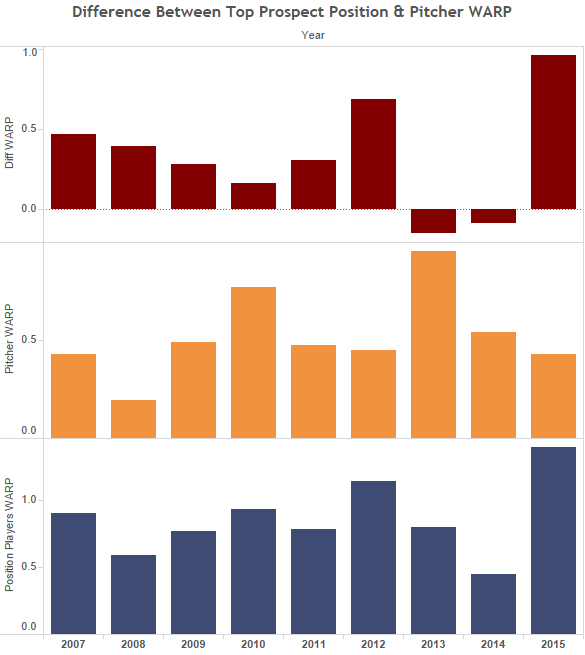 These results were truly surprising. There has been a common notion that pitchers perform better earlier than position players. Especially since, if they can’t stick it as a starter, they’ll be put into the bullpen and have success. Well, maybe, that is the case with rookies in general, but for the past few years, that has not been the case for top prospects. Especially for 2015, where position players finished with a WARP of 1.39 compared to the pitchers, who finished with a WARP of .427. On average, there is a .335 difference in favor of position players.

On top of that, it’s not necessarily the case that position players are getting more opportunities than pitchers. In some years they are, but in 2015, for example, 22 pitchers played in the majors, while 21 position players saw time.

Maybe it’s simply the case that pitchers need a little bit more time to adjust or that position players, in general, are more valuable than pitchers. For the most part, that does seem to be true. Position players usually end up with higher WARP scores at the end of the season. Therefore, the .335 average difference may not be that significant. The 1.39 difference of 2015 is, though; it’s a huge difference between values.

This wasn’t just a great class, this was a great class for position players, and one that as Crawford has mentioned could shape the league for years to come.

This seems to bode well for Arcia and the Brewers. Obviously, this isn’t projecting anything, nor is it meant to be. It’s simply a way of looking at how different classes have done. That being said, it might mean that last year’s class was better prepared. It could also mean that these players were truly special talents, which is what Crawford had noted above. The good news is that Arcia does seem to be one of those special talents. It will also be interesting to see where Arcia lands on the Top-100 list this year. Research has shown that the higher up one is on Top-100 rankings, the better chance he has of becoming a great player.

It, also, bodes well for his performance this year. Below I looked at the average WARP by rank, also inserting a logarithmic curve to analyze the distribution of the information. 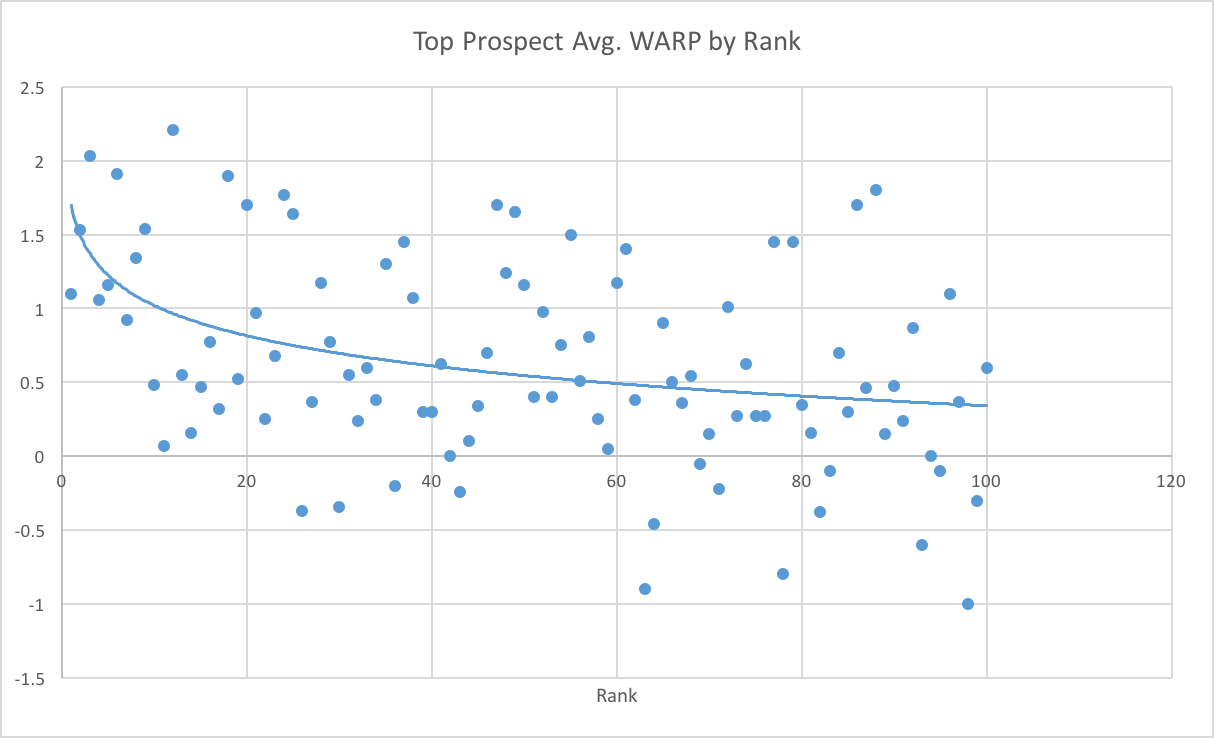 The distribution does skew more towards the higher ranks, even though it’s definitely not a perfect fit. This was expected, considering how volatile one-year performances can be and due to the sample sizes. It’s hard to get a clear picture. I, therefore, grouped them in buckets of five to see if it would show clearer results, even though the data is now more arbitrary. 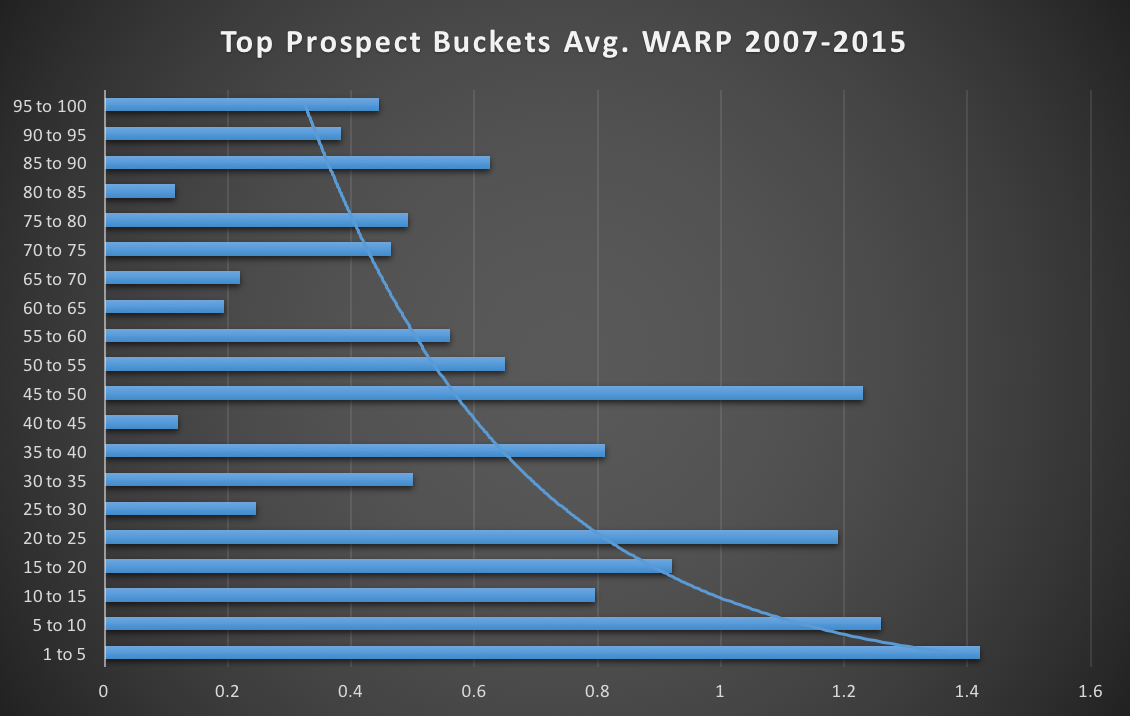 Again it’s not perfect, but the moral of the story is that the higher a prospect is on the rankings, the better chance he has of having a quality performance that same year.

This also means it will be interesting to see:

A) How many Brewers prospects will end up on the BP Top 100,

B) Where will those prospects be in the rankings.

While I mention these questions, Crawford told me that he doesn’t just expect Arcia to make his mark on the Brewers in 2016, “I think you’ll see Jorge Lopez make an impact, he’s one of the more underrated pitching prospects right now. I also think Zach Davies can be a very solid backend part of the rotation, and he should be ready to contribute right now.” Both players made their debuts last season. It’s, therefore, reasonable to assume they’ll make an impact this year.

What I did find interesting was that Crawford mentioned Lopez as one of the most underrated prospects in baseball. It is true that there isn’t generally a ton of chatter on Lopez, which means he might surprise a few people this upcoming season.

Even though the data showed that pitchers don’t perform as well as position players on the whole, this doesn’t mean Lopez and Davis won’t have success this year. These are individuals and should be treated on a case-by-case basis. The data was purely demonstrating the information on an overall nature. For these prospects, it will depend on how ready they are for the challenges ahead, as well as their talent level. And, when it comes to Lopez, a good evaluator of talent is high on him, which should give the Brewers hope for this upcoming season and the years to come.

It’s pretty clear where the organization is going. They’re not in it to win it. And while that might be depressing, it doesn’t mean there won’t be some interesting and exciting moments. Arcia, Lopez, Davies, and perhaps more prospects will attempt to make their mark, and that’s a reason to be excited for 2016.

Here is a graph of every BP top-100 prospects and where they stand by WARP. Also, the blue represents the rank — the darker the blue, the higher the rank, or the closer it is it one. (For a more interactive version you can click here). 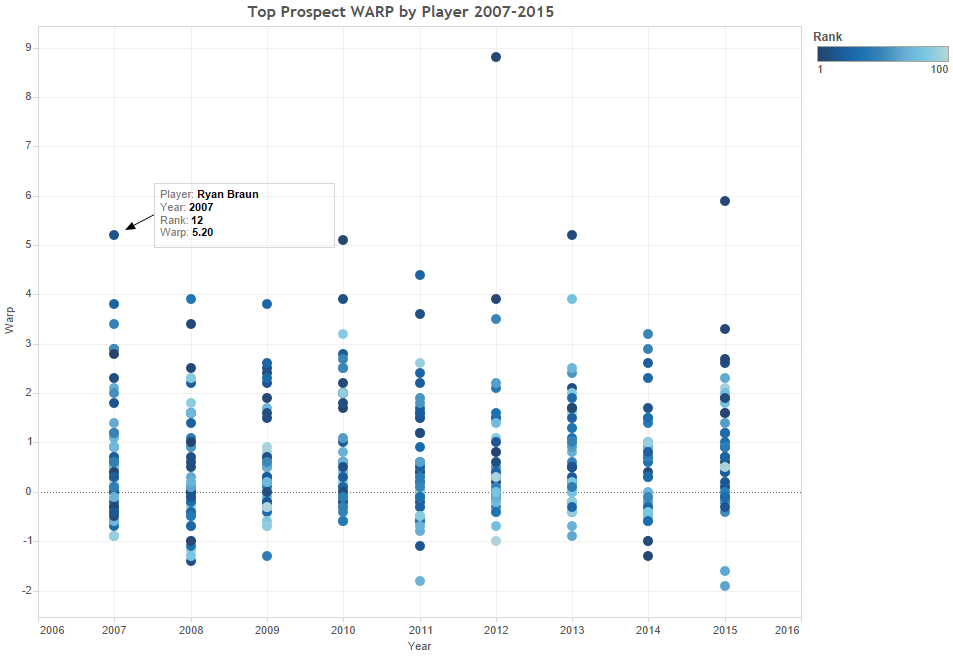 As you can see, Ryan Braun performed extremely well in 2007, when he was ranked as the 12th-best prospect in all of baseball. I’m also pretty sure you can guess who that huge outlier is all the way at the top. If you can’t, it’s Mike Trout, and even his efforts in 2012 were not able to best the prospect class of 2015. For 2015, the best performance went to Kris Bryant.

1 comment on “The Brewers and the Year of the Prospect”