Over the past year-ish, in keeping with the traditions of a rebuilding club, the Brewers traded away virtually every veteran with value. Carlos Gomez, Mike Fiers, Gerardo Parra, Aramis Ramirez, Jean Segura, Khris Davis, Francisco Rodriguez, and Adam Lind all headed out the door, and too many prospects to count came back in their place. The Brewers opened this season with only one holdover from the golden years of the Doug Melvin Era: left fielder and prodigal son Ryan Braun.

Back in 2011 and 2012, Braun was on top of the world. He clubbed a .345 TAv in the former year and a .327 TAv in the latter, both of which ranked fourth among qualified hitters. His efforts on offense netted him an MVP trophy and two Silver Sluggers; for Brewers fans, he looked like a franchise player and potential Hall of Famer. Then came the setbacks, some of them unfortunate (the oblique strain and recurring hand injury) and others self-inflicted (the PED suspension, as well as this whole debacle). From 2013 to 2015, he fell to a .290 TAv — certainly a respectable level of offense, but not that of a phenom.

In 2016, Braun has put all of that behind him. Through his first 75 plate appearances, he’s crushed his way to a .367 TAv. In every regard, his offense seems to have returned to — or surpassed — his peak:

What has Braun done differently to get here? Can he keep it up? Let’s start with the walks and strikeouts. During his two-year run of dominance, Braun brought a moderately patient approach to the plate, swinging at 31.5 percent of pitches outside the strike zone and 65.3 percent of pitches inside it. He combined that with a satisfactory swinging-strike rate of 9.3 percent to create the above figures. When he fell off the pace, he swung more often at everything —his O-Swing rate spiked to 35.4 percent, while his Z-swing rate jumped to 66.0 percent — and made less contact, which led to an 11.4 percent whiff rate.

This year, the planets have aligned for Braun. Like most of his teammates, he’s chased less often, compressing his O-Swing rate to 24.7 percent. Unlike his colleagues, though, he hasn’t sacrificed aggression in the zone — his Z-Swing rate has held steady at 68.2 percent. Simultaneously, he’s missed the ball less frequently, which has shrunk his swinging-strike rate to 6.9 percent. He’s managed to cut down his strike rate, called strike rate, and swinging-strike rate; in other words, he’s attained the plate-discipline trifecta.

With the swinging strikes, there are several noteworthy developments. Through the ups and the downs, one thing has generally stayed the same for Braun — he’s had a soft spot against high pitches: 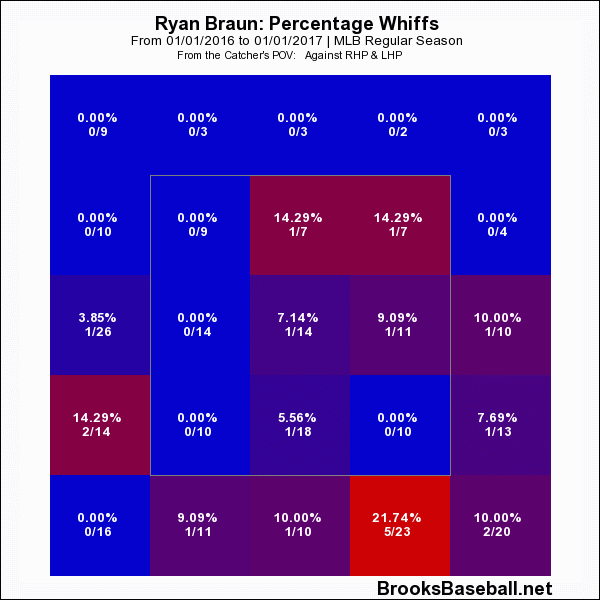 Braun’s whiff rate on those high pitches has dropped all the way down to 3.5 percent. That’s not the only thing he’s changed, either. When he entered his three-year slump, Braun started whiffing at pitches low and inside a lot more; so far this year, he appears to have emerged from that spiral as well.

In terms of pitch types, Braun hasn’t fared much differently against breaking balls. He’s instead taken a step forward against hard and offspeed pitches: 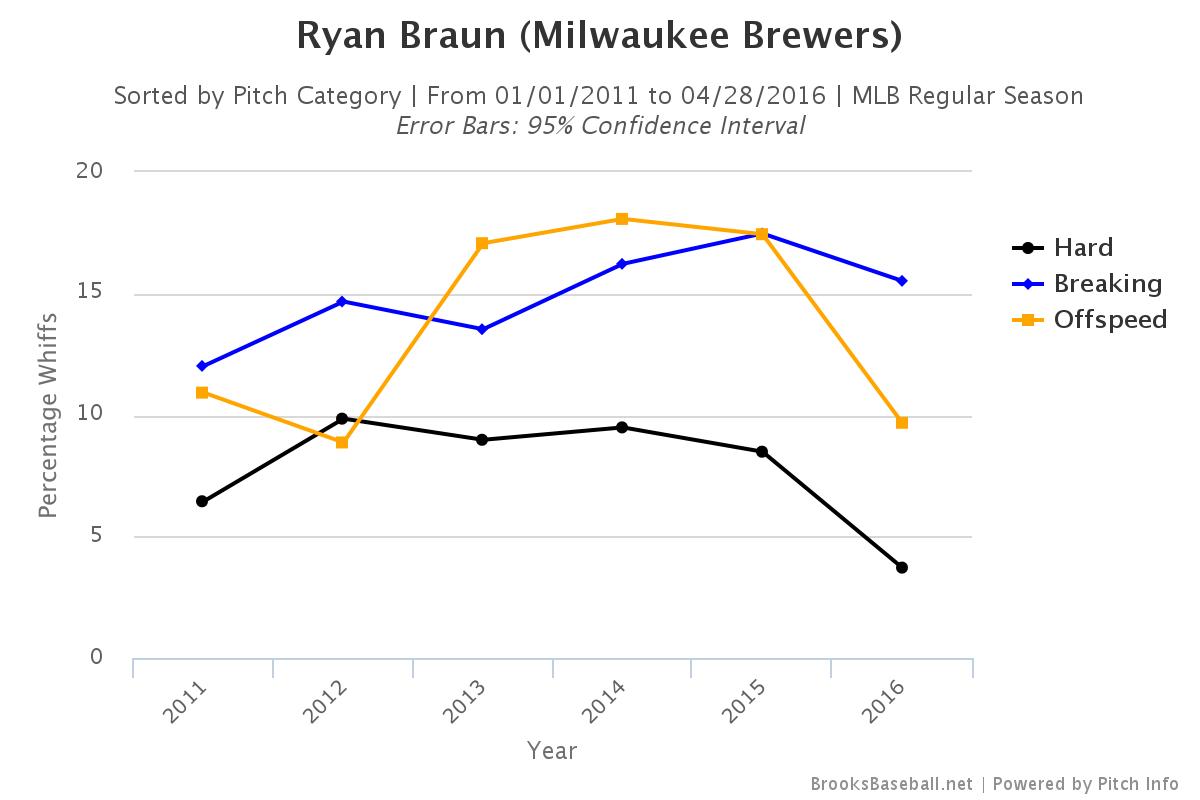 Back in 2014, Stuart Wallace argued that Braun’s hand malady had led to “slower bat speed and erratic swing path, making the swing longer than desired”; in turn, he theorized, that prevented Braun from catching up with harder pitches. With his hand fully healed in 2016, Braun can now turn on fastballs like never before — in addition to the plummeting whiff rate, he has a .364 average and .636 slugging percentage off fastballs. Together with his return to normal against offspeed offerings, this has given him the contact skills of an All-Star.

The plate discipline is trickier. Most players won’t pair a high Z-Swing rate with a low O-Swing rate, as Braun has done to this point. In 2015, out of 300 hitters who saw at least 1,000 pitches, only 11 were above 66 percent in the former and below 26 percent in the latter:

An eye this discerning doesn’t come around very often. That isn’t to say, however, that Braun can’t sustain this. The uptick in swings during Braun’s down period could have stemmed from his poor health — without the power he once had, he might have pressed at the plate. After getting back surgery in the offseason, he’s recovered well; despite taking a day off on Tuesday, he told the Milwaukee Journal Sentinel‘s Todd Rosiak that he’d “been very pleasantly surprised with how good the back has felt and responded”. If his clout is truly back, then the plate discipline could stick around as well.

So the question then becomes, will Braun’s power stick around? At first glance, it looks a little fluky. From 2011 to 2012, he put the ball on the ground 42.6 percent of the time, while tallying a hard-hit rate of 36.7 percent. Over the subsequent three years, he continued to make solid contact, doing so 35.5 percent of the time, but he stopped elevating the ball — his ground ball rate inflated to 48.9 percent. This season, he’s maintained that grounder rate (48.1 percent) and hasn’t improved on his hard-hit rate (37.0 percent). If he hasn’t put the ball in the air like he used to, and he hasn’t managed to square it up more often, what’s behind this explosion?

The answer lies in his batted-ball distribution. Braun pulled 34.1 percent of his balls in play during his MVP years, after which he kept his pull rate at 32.9 percent. In other words, he hit pretty evenly to all fields, no matter what the results were. He’s abandoned that strategy entirely in 2016, by yanking the ball to left field 46.3 percent of the time. That’s the area of the field where he has his highest career wOBA — .485, compared to .429 to center and .444 to right. And this change has happened because Braun has been more selective on inside pitches:

In the offseason, I covered Braun’s opposite-field power, which he tapped into by swinging more often at pitches outside. The opposite mindset has helped him pull the ball — on pitches in the inner two-fifths of the zone, he used to swing 52.2 percent of the time, and now he swings 48.4 percent of the time. Braun still hits well going the opposite way — on 29 balls hit to center and right field, he’s hit .482 and slugged 1.034 (not a typo). He’s just decided to capitalize on the pull field, and it looks like a wise decision to this point.

The power section comes with more caveats. Of course, Braun’s current BABIP won’t last; once that settles down, it’ll sap a lot of his current prowess. And his power will probably fall off as well — even with all of these pulled balls, a ground ball hitter’s ISO will probably top out in the .230s or .240s. Still, he seems to have regained his stroke, and even if he regresses after this, his overall line should be pretty impressive: PECOTA expects him to finish the year with a .309 TAv. After three years wandering the injury-plagued desert, Milwaukee’s prodigal son has returned home to claim his throne.

Braun has made it clear that he wants to stay with the Brewers, no matter how much David Stearns stripped the club. In the offseason, as player after player hit the road, the Journal Sentinel‘s Tom Haudricourt reported that Braun “expects to be around as the team regroups”.  That coalescence will probably take a year or two; when it does come to fruition, though, the aging star could still be able to hold his own. The next strong core of Milwaukee position players could have an all-time great as their mentor.