A few weeks ago, I addressed the Brewers extreme shift in plate discipline numbers. The team had moved from the highest O-Swing percentage in the league in 2015 (34.1 percent) to the lowest in 2016. With about double the sample size now in the books, that remains true: Milwaukee’s O-Swing percentage this season remains a league-low 23.0 percent, more than a full percentage point lower than the second place Cubs. I noted in that article that the Brewers hadn’t just developed a better eye for the strike zone however, also carrying a league-low swing percentage on all pitches. While walks are way up for the Brewers this season, the strikeout rate has risen as well, particularly on the dreaded backwards K.

An increase in strikeout rate has not been the only consequence of Milwaukee’s steadfast commitment to taking more pitches the season. As Brewers fans are acutely aware after the last week’s worth of games, the Brewers have been painfully poor at situational hitting this season. Through Wednesday’s games, Milwaukee has hit .235/.333/.350 with runners in scoring position, a batting average that ranks 22nd in the league. With runners in scoring position, of course, base hits are significantly more valuable than simply getting on base.

Milwaukee’s depressed swing rate has resulted in an increase in baserunners by way of the base on balls, but it hasn’t helped them move and score runners. The Brewers left 41 men on base in their four game series with San Diego last weekend, including a season-high 16 in an extra innings 7-8 loss on Saturday. On Wednesday the Brewers left another 10 men on base against Chicago, including three in the bottom of the 12th after loading the bases with no one out and another pair, including the potential tying run on third with just one out, in the 13th.

I theorize here that Milwaukee’s decrease in swing rate is negatively correlated with the number of men they leave on base. My thinking here is two-fold. Taking more pitches, particularly pitches outside the strike zone, leads to an increase in baserunners via an increased walk rate. At the same time, the lowered swing rate tends to leave those runners stranded more often, as a lower number of balls put in play gives runners fewer chances to advance and score. Below is a graph showing each team’s O-Swing percentage against the number of men left on base: 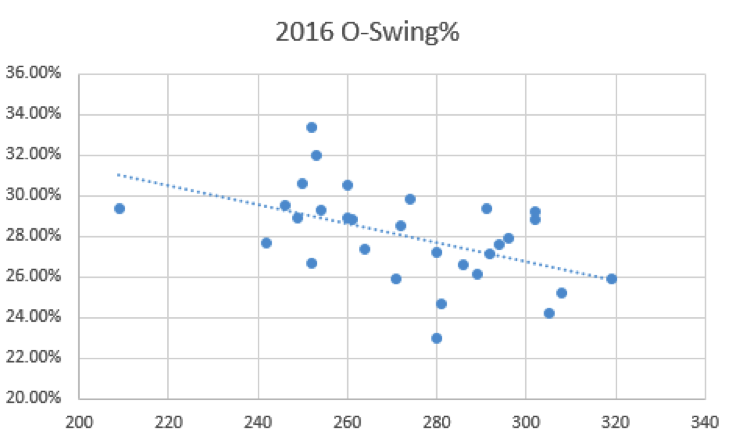 We have a -.50 correlation coefficient here, representing a weak but statistically significant correlation between the two measures. Just a quarter of the way through the 2016 season, we’re still teetering on the edge of the dreaded small sample size, so to further test this theory, here is the three-year plot of the same measures: 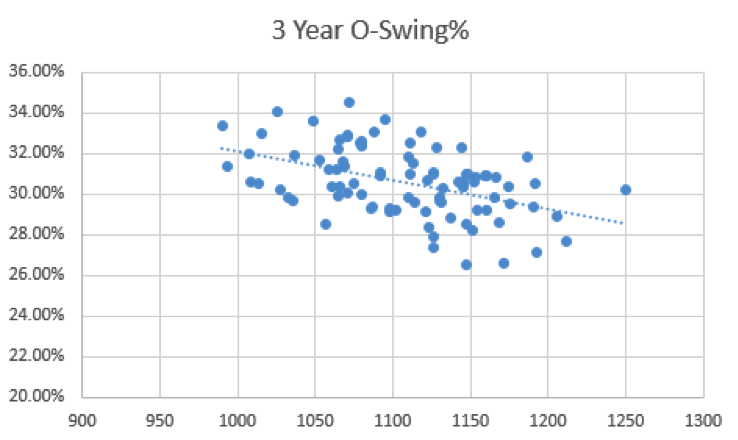 The correlation coefficient for the 2013-15 seasons between O-Swing percentage and men left on base is -.46, a slightly weaker but still significant correlation. As I mentioned, however, the Brewers aren’t just swinging less at balls, they’re swinging less at everything. Here are the same graphs for 2016 and 2013-15, this time using total swing rate: 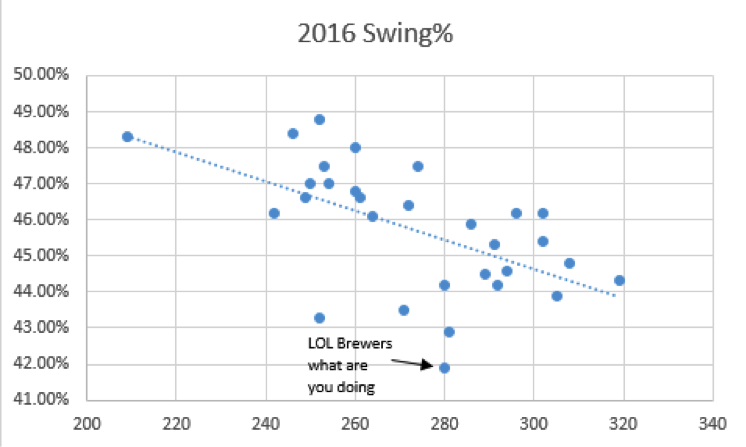 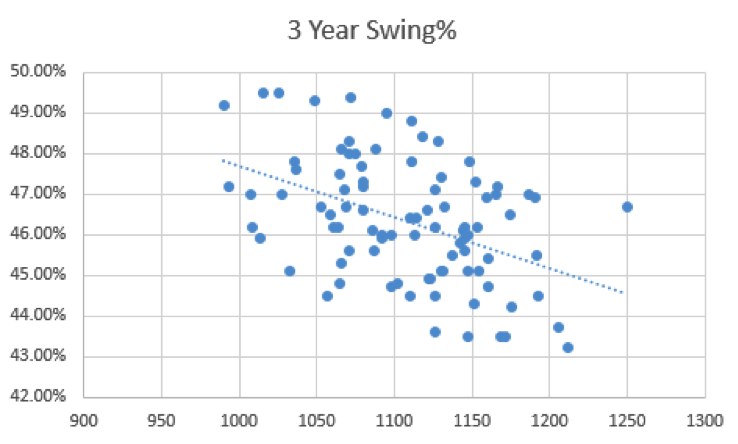 These numbers show a slightly stronger negative correlation, confirming that there does seem to be relationship between a team’s swing rate and the number of men they leave on base. The numbers here help to explain how a team that ranks in the top ten in the on base percentage can still be scoring runs at a below league average rate.

Baseball fans tend to have a confirmation bias when frustrating events happen: when your team is dominated by a pitcher of lesser quality, it’s because your team always looks bad against bad pitchers and plays down to its completion (hi, Cubs fans); when the home team fails to score a runner on third with less than two outs, it’s because they always do that. For Milwaukee fans, the latter has in fact been true: despite have the sixth most opportunities to score in that situation, their 43 percent rate of scoring that runner ranks a frustrating 26th in the league. We won’t use the dreaded “C” word here, but in order to take advantage of the baserunners their churning out with their improved plate discipline, Milwaukee needs to change their approach at the plate with runners in scoring position to focus more on putting balls in play and allowing runners to make plays.

Travis Sarandos
Follow @@travis_mke
Travis is a Brewers fan and a Yasiel Puig apologist. He enjoys tacos, Taylor Swift, and he is better than you at Settlers of Catan. He is a 2010 graduate from UW-Whitewater, and is currently a graduate student at UW-Milwaukee. He looks forward to adding M.S.Ed. to the end of his name when sending emails.
read more from Travis Sarandos

3 comments on “All You Had to do was Swing”