The Braves are the worst team in the National League. The way you become the worst at something, of course, is by being bad at a number of things, and the Braves are bad at a number of things. But, what they are worst at, what emphatically defines this team’s utter unwatchability, is their offense. And in their offense, they do a slew of things poorly, too many to count, but what they perhaps do worst is hit home runs. This season, the Braves have hit 19 home runs. That’s awful, that’s so bad that the team ranked 29th, the Phillies, have hit almost double the amount of home runs the Braves have hit (36).

Thankfully, for the Braves, Wily Peralta was pitching for the Brewers. Peralta, has been, let’s just call it unfortunate this season. He’s got the worst DRA in all of baseball. So, something’s got to give right?

Well, in the first inning, Peralta made this face. 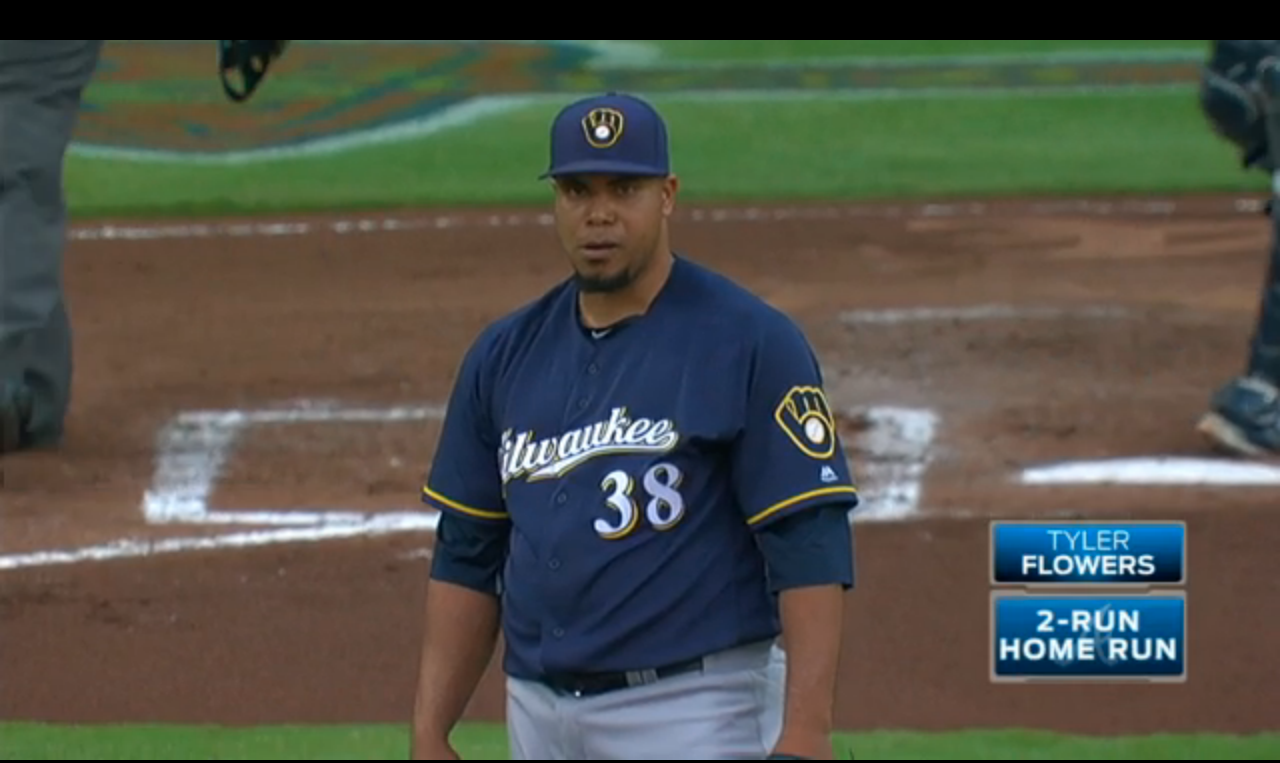 Top Play (WPA):
In the 4th inning, though, Peralta was in a position to redeem himself. But, not with his arm, with his bat. In the top of the 4th, the Brewers had loaded the bases. Well, the Braves chose to load the bases. After Matt Wisler struck out Alex Presley with one out and a man on third and second, the Braves decided to intentionally walk Maldonado in order to face the pitchers spot. Now, it might have actually been a smarter move for Counsell to pitch hit for Peralta in this situation, but given that it was this early in the game, it was improbable that Counsell would elect such a “radical” move.

So, Peralta was up with the bases loaded and two outs, and you know what. Peralta came through. He hit a rocket up the middle, which scored two runs and eliminated the deficit.

Worst Play (WPA):
In the sixth inning, Peralta was still pitching. The score now, however, was 6-2, in part thanks to home runs by Ryan Braun and Jonathan Villar.

The sixth, however, didn’t get off to a good start, after Peralta got Flowers to groundout on the first pitch, Kelly Johnson singled on a line drive, followed by a Jeff Francoeur double. With runners on second and third and only one out, Counsell decided to bring in Jhan Marinez who was just acquired from the Rays.

The Braves decided to counter by having Reid Brignac pinch hit. This, however, proved to be a bad move as Brignac struck, out allowing the score to remain in tack and putting two outs on the board. The Brewers were eventually able to escape the inning without a run scoring and went on to win the game.

A COUPLE OF QUESTIONABLE MOVES:
This game had a rain delay in the top of the seventh, but not just any rain delay. A 1hr and seventeen-minute rain delay. When the game finally resumed, the Braves had switched their pitcher, but interestingly enough the Brewers did not.

Martinez came back out for the seventh inning. The Brewers had a comfortable lead, but bringing a player back out, even if he only pitched to two hitters seems questionable. The pitcher already pitched pressured inning, and probably cooled off during the delay. Now, naturally he got some time to warm up, but you usually see teams switch their pitchers after such a long delay. The primary reason is probably due to injury, and effectiveness. The pitcher might not be as sharp, plus cooling off the way Marinez did and then restarting again, is probably not the safest option.

Then with one out in the ninth inning, the Brewers had a man on third with one out and Keon Broxton coming up to the plate. After Broxton took a ball inside, the Brewers told him to bunt on the next pitch. This seemed like an odd play in an odd situation. The Brewers were up comfortably 6-2 in the ninth inning. Having Broxton attempt to bunt in that situation to drive in a runner shows a lack of confidence in said player. Yes, Broxton has experienced some struggles in the big leagues, but many young players go through struggles their first time around in the big leagues. Not everyone is going to come out with a head of steam. This seemed like a good opportunity for a young player to get some reps, and while he was able to get two swings out of the plate appearance, and even though he struck out, it seems misguided to have him even try to lay down a bunt. At this point, you’re not trying to see whether Broxton can bunt in the big leagues. Who cares if he can bunt, you want to see if he can swing the bat.

COMING UP NEXT:
The Brewers will be in action Friday against the Reds. The Reds currently hold the worst record in the NL Central. Some might hope for the Brewers to lose these games and claim the doldrums of the National League for themselves. Thus far, the Brewers have proven themselves to be, while a flawed team, a team slightly above the likes of the Reds and Braves.