TINSTAAPP: There Is No Such Thing As A Pitching Prospect. For every promising young hurler who lives up to his billing, ten more will flame out. Brewers fans have certainly experienced this concept, with Mark Rogers, Jed Bradley, and (possibly) Wily Peralta, among others. And before this year, Jhan Marinez looked like a pretty good example of it. He’d never capitalized on his immense potential as a Marlins and White Sox farmhand, and at age 27 he didn’t seem to have much left in the tank. To this point in the 2016 campaign, that story still applies, albeit to a lesser extent — Marinez’s performance has fallen short of his talent.

But wait! Hasn’t Marinez dominated this season? Since coming to the Brewers, he’s struck out 34.2 percent of opposing batters and walked 7.9 percent. He’s notched a 52 percent ground ball rate, preventing hitters from squaring the ball up. Add it all up, and you get his 2.89 ERA and 3.02 FIP, which are the numbers of a top-notch reliever. Does this mean he’s broken out? Might he have finally put it all together?

Let’s put aside the fact that Marinez has pitched a mere 7.1 innings in Milwaukee, making his strikeout and walk rates unreliable. He hasn’t done much to deserve them, especially the former. According to Baseball-Reference, he’s thrown a swinging strike for 11.1 percent of his pitches as a Brewer, on top of a called-strike rate of 18.7 percent. Compared to major-league averages of 10.9 and 17.3 percent, respectively, those don’t stand out all that much. Marinez has pitched well enough, sure, but he hasn’t deserved his gaudy numbers.

Make no mistake, Marinez throws three solid pitches. His four-seam/sinker combination can be dangerous, and along with a slider, his arsenal has the capacity to make him great. He just hasn’t gotten there yet, and each of his three offerings has had separate problems. He’ll need to overcome these woes to make the leap.

Marinez’s sinker has served as his primary pitch since he came to Milwaukee. He never threw the pitch before this May, according to Brooks Baseball, and no one else seems to have noticed. Regardless, it’s certainly a formidable weapon — out of 95 relievers with at least 50 such pitches, Marinez’s sinker ranks 13th with an average velocity of 95.7 mph. Yet it hasn’t gone for as many ground balls as he’d like, slotting in at 63rd with a 56 percent grounder rate.

Perhaps because he’s still tinkering with it, Marinez’s sinker moves very unconventionally — it has a mere 2.5 inches of drop, one of the lowest marks in that sample. That leads to the biggest problem with the sinker: It hasn’t really…sunk.  See for yourself: 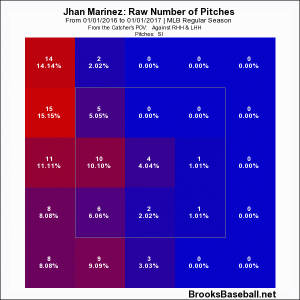 This is a pretty bizarre trend, as you might expect. Per Baseball Savant (which labels the pitch a two-seamer), Marinez has thrown only 43.1 percent of these in the lower part of the zone*. That puts him in the bottom fourth of the majors. If he remains unable to target the correct area of the strike zone with his primary pitch, Marinez will continue to hold it back.

Now, high heaters do lead to one positive thing — whiffs. And indeed, Marinez’s sinker ranks 17th in the 95-man sample with a 10.1 percent whiff rate. His offering has nevertheless underperformed, partially because of its quirky movement and partially because of his poor command.

The four-seam fastball, which Marinez has relegated to second place as a Brewer, has a pretty similar story. It possesses blazing velocity — traveling, on average, 95.8 mph this season — and it’s used that to rack up called strikes in 23.3 percent of its appearances. Its 6.1 percent whiff rate lags considerably behind that, however, as does its 44 percent ground ball rate.

Here, too, the problems go back to command. Marinez’s four-seamer has leaked into the upper parts of the zone pretty frequently, and he’s grooved it a few times as well: 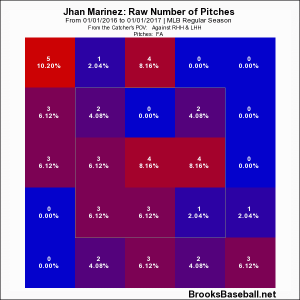 Here, the problems aren’t as severe as they are with the sinker. Marinez gets respectable movement on the four-seamer, and he has a better idea of where it’ll land. With that said, the sinker has become his primary pitch, making its deficiencies stand out even more. Unless he returns to the two-pitch mix he relied upon before 2016, the four-seamer’s relative quality won’t have an especially big impact.

With the slider, things get a little bit worse. Marinez’s slider seems solid; he’s thrown it at an average velocity of 85.9 mph, which appears to be an elite velocity. But appearances can deceive. For the 121 relievers with at least 50 sliders thrown in 2016, the average velocity is 84.8 mph — not far off from Marinez’s mark, which places only 43rd. The days when a mid-80s slider would bowl over opposing hitters are over, especially for relief pitchers.

Nor does Marinez’s slider have the movement to make up for this. (Starting to see a trend?) Its 1.0-inch run is the 22nd-worst among those 121 hurlers, and its 2.9 inches of drop rank eighth from the bottom. Consequently, it’s posted a swinging strike rate of just 16.9 percent, in line with the average mark of 16.8 percent. A power slider without a whole ton of relative power, and without much bite, hasn’t done Marinez any favors.

Why haven’t these problems sunk Marinez to this point? In the minor leagues, hitters aren’t nearly as disciplined. They’ll chase pitches with velocity, regardless of how little they move, and the placement doesn’t make as much of a difference. Marinez can retire these hitters, either on a strikeout or a groundout; that success doesn’t carry over to the Show, though. For him to spit in the face of TINSTAAPP, he’ll need to build on his 86 cFIP, which will require better command and more movement. Absent that, well, he’ll go down with the Bradleys of the world — as another talent who got away.

All data as of Tuesday, June 7.

2 comments on “Jhan Marinez Has The Stuff, But Not The Results”