This is how the night started for Case Anderson.

TOP PLAY (WPA): In a game when the Brewers got clobbered, you wouldn’t expect them to have the top play, but they did.

While the final result of the game displayed a lopsided affair, the game was actually quite close for the majority of the time.

In the sixth inning, the Brewers were down 4-3. They were fighting their way back after falling behind 2-0, then tying it up 2-2, only to fall behind again 4-2. Hill led off the inning with a double. Ramon Flores was the next batter and on the first pitch of the at-bat, he lined a double, which scored the run and tied the game 4-4. Unfortunately, that same inning Brandon Crawford made an exceptional play.

Usually, when a player going from second to third gets thrown out by the shortstop, it’s usually the base runners fault. This time, though, I wouldn’t blame Flores. The ball went up the middle and Crawford made a beautiful play.

Oh ya, and that was also the BOTTOM PLAY (WPA).

KEY MOMENT:
Sometimes I think WPA gets it right and displays the most important play in the game, and sometimes I don’t. This is one of those times where I don’t.

This, for the most part, was a close game until the seventh inning when the Giants blew the game wide open. The score at the time was 5-4 for the Giants and it was their turn to hit. The inning got off to a good start for the Brewers as Denard Span and Joe Panik were retired quickly. But then trouble ensued. Belt singled on a line drive. Posey followed with a ground ball to second base, which Gennett dove for and stopped the ball. Unfortunately for the Brewers Gennett’s throw to second wasn’t on time, and the inning continued. Matt Duffy then singled as well and the bases were loaded for Brandon Crawford.

Blaine Boyer was able to work a 0-2 count on Crawford and was only one pitch away from getting out of the inning. But, on the 0-2 pitch, Crawford hit a broken-bat bloop single into center field, which scored two runs giving the Giants a 7-4 lead. The Giants would end up scoring two more runs in the inning which basically put this game out of reach.

Trend To Watch:
Blaine Boyer struggled tonight. He also still has a 2.03 ERA, but ERA is a flawed pitching metric. His DRA is actually quite poor at 5.31, which is one of the worst on a subpar Brewers pitching staff.

One of Boyer’s biggest problems is that he simply doesn’t strike anybody out. This season he’s only striking out 3.2 hitters per nine innings, which is the worst strikeout rate among all Brewers pitchers. Boyer is going to have to improve upon this or else his bullpen roll could be in jeopardy.

DOG ON A SKATEBOARD

DUDE’S GLOVE IS WAY TOO BIG: 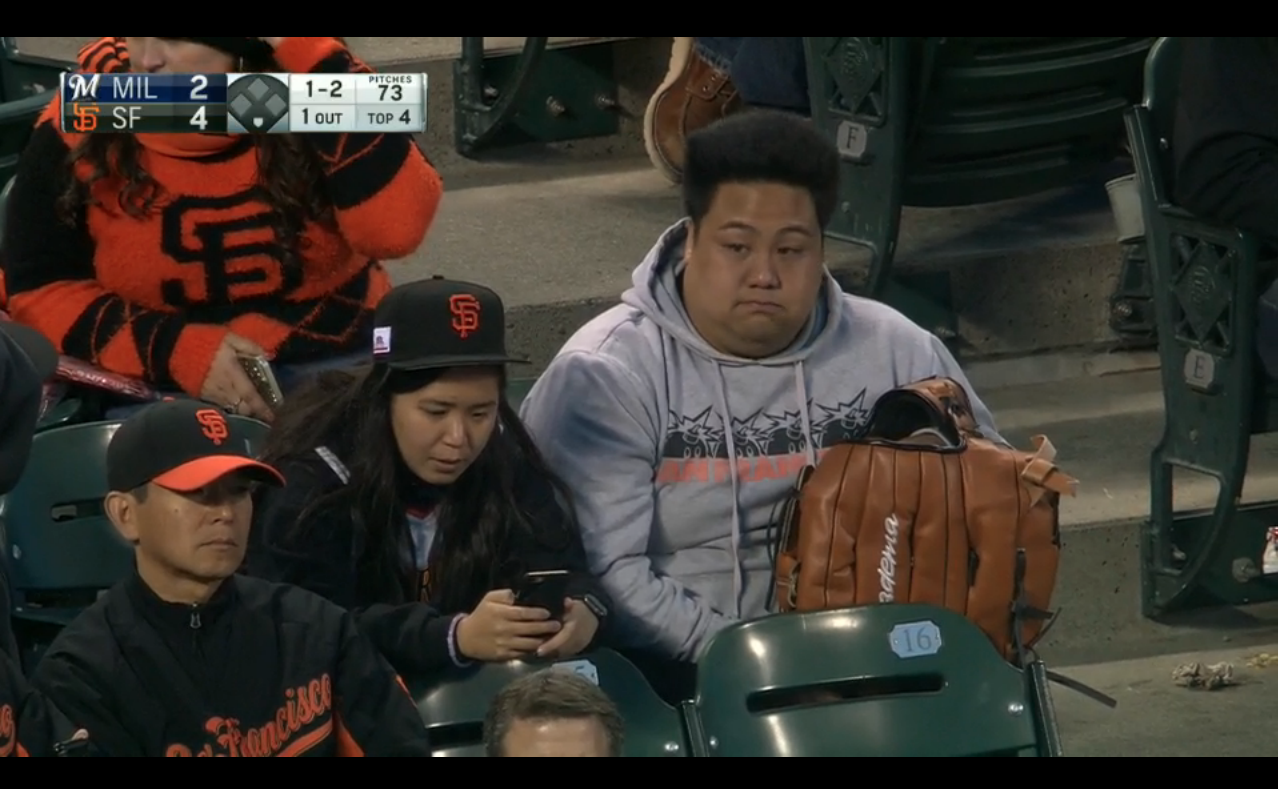 The glove, the hair, the girl on her phone, it’s just all really good.

this swing is how my heart feels pic.twitter.com/BiEvU7GTTF