The storm has passed, the dust has settled, the draft is finally over. With their first pick, the Brewers selected Corey Ray, an outfielder from Louisville. We don’t know what Ray will become, but thus far, a number of people have been praising this selection including Christopher Crawford of BaseballProspectus, who described him as his favorite player in the draft. On The Strike Zone podcast, Crawford said this about Ray: “He can do a little bit of everything and there’s really no weakness to his offensive game. He’s the type of guy who’s going to hit .280-.300, hit 15-25 homers, steal 25-35 bases, plays good defense in a corner outfield, maybe even center field… This is a kid who has an incredibly high floor, but also that rare combination of the high floor and the really high ceiling. It would not shock me at all if Corey Ray was the best player to come out of this draft and he’s also a really good kid.” Crawford continued, “That’s the guys that I come out of this draft thinking yeah, that’s going to be the guy we look back and wonder how he fell to five.”

It’s also important to note that some have criticized a few of the top selections. Some have suggested that some teams didn’t pick the best players in order to sign players below slot. This would then allow the team to spend more on players who might fall in the draft. The criticism is basically that teams, especially with their first round picks, should pick the best players.

First, I gathered draft data from baseball-reference, and excluded any player that didn’t sign with the team, and played at least one game in the majors. Since I gathered the information from baseball-reference, I used their bWAR model. I then looked at the amount of bWAR that was accumulated by round. I stopped at 2010 because players after that year haven’t really made an impact in the big leagues. We don’t yet know how they will turn out. 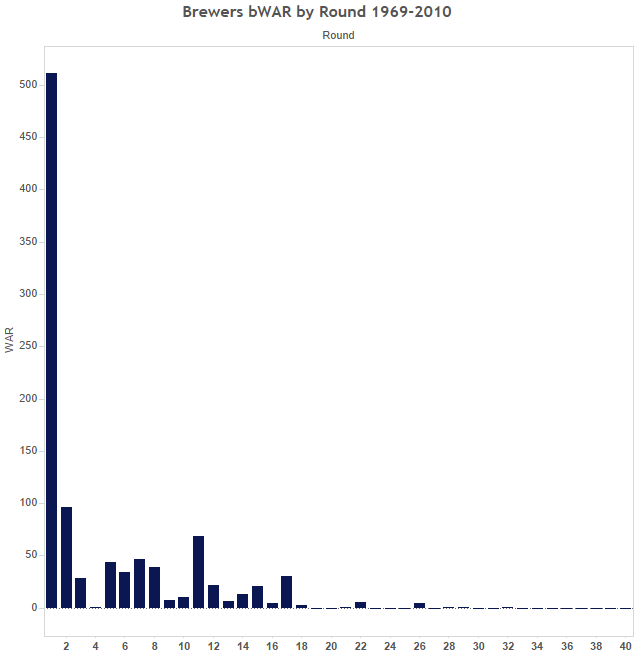 That said, a first round pick can be hit or miss. For the Brewers, they’ve drafted a couple of Hall of Famers in the first round with Paul Molitor and Robin Yount. Yet, 35.71% of their first round selections have never made it out of the minor leagues. Think of it this way, in the next three years, it’s possible that only one of the players the Brewers will draft in the first round will make it to the majors. That doesn’t even include the chances of them being productive.

Here’s how the information looks from a year to year basis. 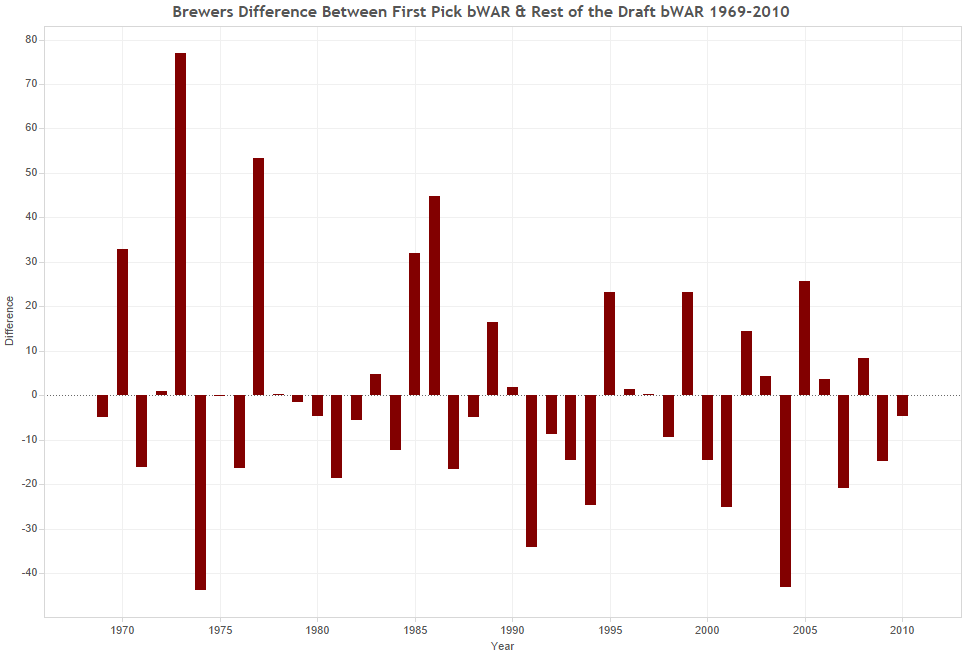 The draft is hard, it’s really, really hard. Hundreds of picks are made every year and very few of them pan out. The problem is that there’s a huge amount of randomness. Player development also plays a big factor in determining a player’s future success. That said, at least when it comes to the Brewers, a first round selection can often make or break the draft. It’s usually where a team will find a future star, and even if they don’t all pan out, and they won’t, the majority of them won’t pan out, but it still remains the most important pick nonetheless. Plus, for a rebuilding team, getting it right and wrong can be the difference between a quick rebuild and a lengthy one.

2 comments on “How Often is the First Pick the Best Pick?”

Really good article. Did you notice a 1st round tier? Such as top ten picks are 80% successful, the rest of them 30%. Was there a big disparity for P vs position players.?