Throughout this offseason, I was a proponent of trading Jean Segura. I saw a shortstop who was getting steadily worse and whose value was being propped up by stellar defensive ratings that would only be declining. The Brewers presumably saw something similar, as they did eventually make the decision to trade him. This was an entirely justifiable choice, as Orlando Arcia was (and remains) the future at shortstop and Segura had more value on the trade market as a league-average shortstop than to the Brewers as a second baseman.

I thought this also represented selling high; Segura’s offensive regression was worrisome (.265 TAv in 2013, .233 TAv in 2014, and .217 TAv in 2015) and driven by a dropping OBP. His stellar 2013 was even seen as partially a fluke as it was powered by a hot first half propping up an abysmal second half (.583 OPS post-All Star Break). Thus, in two years, Segura had gone from being a sure-fire All Star to a league-average shortstop who looked to be a well-below-average hitter.

But a funny thing happened this year: Segura has started hitting again. Through 79 games with Arizona, he has a .279 TAv, and it is being driven by a change in his approach.

The most obvious spike in his numbers is his BABIP. He has a .346 BABIP, which would be the highest of his career. It is possible for players to run BABIPs that high, but we generally see it from players who are very fast and hit a lot of ground balls. Segura runs well but is not among the league’s fastest players, and his ground ball rate this year is the lowest of his career. Therefore, it’s likely that at least some portion of that BABIP jump is luck.

However, it would be foolish to dismiss all of his improvement this year as luck, especially in light of the aforementioned change in his approach. The other, obvious way to see a BABIP increase is to simply hit the ball really hard so that it’s harder to catch, and a way to hit the ball harder is to just swing at better pitches. Segura is generally doing that.

The first step of that equation is his plate discipline, and Segura has gotten more patient this year. He is swinging at just 45.2 percent of pitches he sees, which is the lowest of his career and significantly lower than his 53 percent swing rate last year. Interestingly, he is swinging less frequently at pitches both in and out of the zone. The lower chase rate is clearly a positive, and his decision to swing at fewer pitches in the zone has worked well for him (although if one is letting hittable pitches pass, it can be a negative). Generally, this has worked because he is still swinging at pitches in the middle of the zone, as the charts below demonstrate (note how concentrated the middle of the strike zone is for 2016). 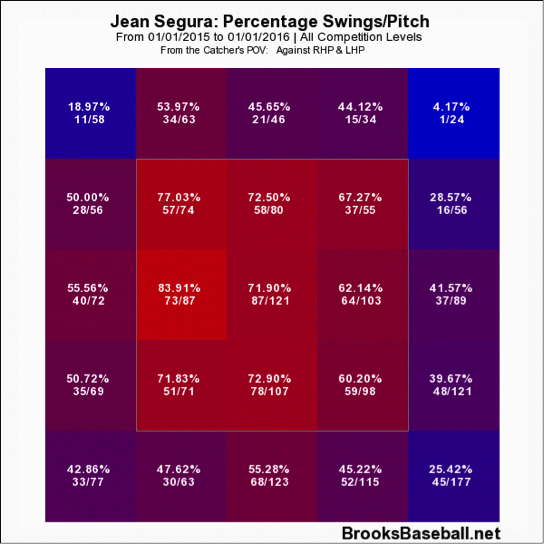 Once we establish that he has been more selective this year, we will want to check his exit velocity to see if he is in fact hitting the ball harder—and the Statcast graphs below demonstrate that he is, at least for pitches in the middle of the zone, which is what he is still swinging at. 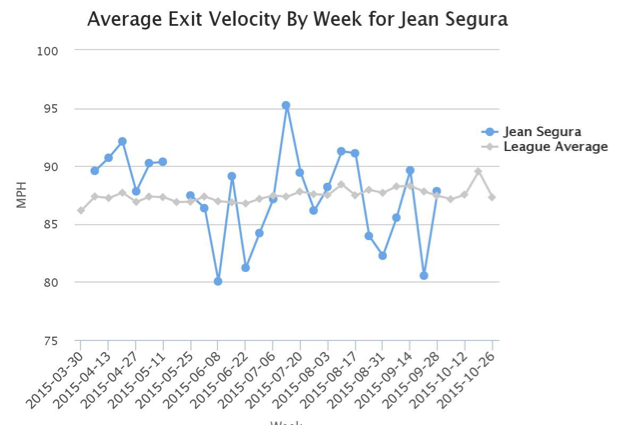 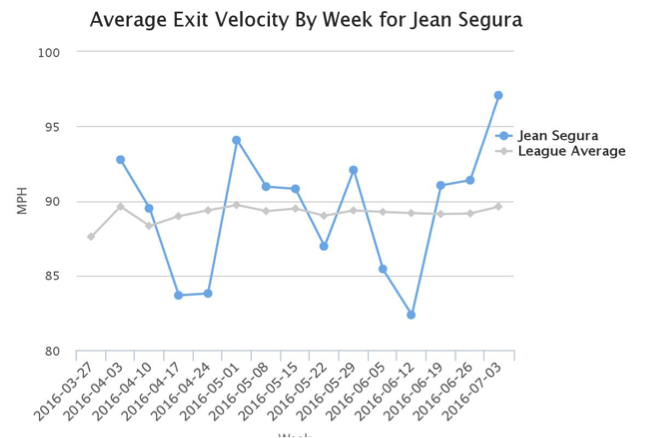 This all reflects on the Brewers’ inability to get through to Segura. He had a below-average walk rate each year he was with Milwaukee, and the Brewers’ efforts to get him to improve his selectivity just didn’t work. At his best in 2013, he had approximately the same swing rate, but that did not last. In fact, as his selectivity worsened, so did his production.

If Segura turns out to be a legitimate All Star with the Diamondbacks in the same way that he looked to be one for his first few months as a Brewer, it would be a disappointment but not a disaster. First, it’s worth pointing out that Segura was excellent for his first few months in Milwaukee and then tailed off tremendously. It’s still possible that he does that in Arizona.

Second, some players need changes of scenery. From a developmental standpoint, it’s not great that the coaching staff appears to have lost the ear of one of their young players. One would prefer to see them really be able to connect with each key part of their young core. However, each player is different, Segura did look to be declining, and the return in the trade was reasonable.

Ultimately, if Segura has turned a corner, the Brewers development staff will not be thrilled with itself. The fact that someone else got through to him when they couldn’t does not portend well, although this could just be a blip on the radar.

Tags: Jean Segura |
Seth Victor
Follow @sh_vic
Seth is currently a student at UCLA School of Law. He is also a recent graduate of UC Berkeley, where he majored in Political Science and played club baseball.
read more from Seth Victor