Over the next three years, his lowest TAv was .274, and the consistency he demonstrated year after year catapulted him into the discussion of best catchers in baseball. It was at this point that the value of a diverse skillset became clear; for those first five seasons, both his bat and glove saw some wild swings. His TAv ranged from .224 to .305, and his FRAA ranged from 45.4 to 16.9. And yet, the lowest WARP he posted in a full season was 5.7. He was able to weather slightly subpar performances (for his standards) at either the plate or in the field because he was so good at both aspects.

There are many ways to generate value and be a good baseball player. The obvious and safest way is to be good at a lot of different things, as this provides the most backup plans should some aspect of one’s skillset fail. It is for this reason that up-the-middle prospects are the most coveted. If a center fielder proves unable to hit, at least he can still play a premium defensive position. If he proves unable to play center field adequately, he can be moved down the defensive spectrum to a corner. There are simply more contingency plans and options when a player has a variable skillset.

But in the last two years, his glove has completely fallen off, at least according to FRAA. The decline began earlier in his career when he dropped from a peak of 45.4 to 16.9 in his seminal 2014 season. Last year, though, his FRAA was just 0.9, and this year it is stuck firmly at zero. So, while there is generally volatility in defensive numbers, two years of exactly the same evaluations suggests that we are truly seeing a declining skillset.

Even with this, Lucroy is a valuable player just because of his bat. His .301 TAv this year is well above his career mark of .275, but it is right in line with the upper limits of his performance and clearly within the bounds of what he has proven himself capable of—that is, this is not a fluke. He has 3.3 WARP through two-thirds of the season, which puts him on pace for about 4.5 wins. That is clearly an excellent player, but it isn’t quite the six-win level he was reaching previously.

It also puts him more at risk for a serious decline. With two elite skills, he was a much safer bet to perform year after year simply because if one disappeared he would still be good. One has disappeared now, though, so if the bat goes, he becomes much riskier very quickly.

However, it is also worth speculating about whether or not this decline in defensive performance is real. As is evident from the chart below, framing numbers make up the bulk of a catcher’s FRAA, and Lucroy’s have declined rapidly. 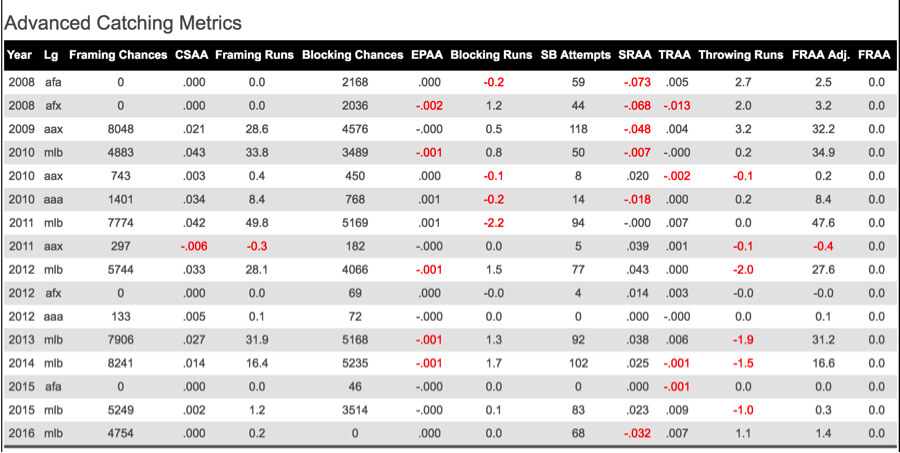 But it isn’t exactly clear why (at least to me, a non-expert in these matters). Presumably, Lucroy himself has gotten worse, but framing isn’t necessarily a skill that declines with age. Jose Molina was famously great at it until his bat forced him out of the league after 2014, and a quick analysis of BP’s statistics report of all big league catchers in 2016 shows a correlation of essentially zero (-0.01) between age and framing runs.

This fact makes Lucroy’s decline interesting, as the fact that there is little relationship between age and framing skill again raises the question of what exactly happened over these past two years. Notably, though, it does open the possibility that Lucroy returns to his former greatness.

Recently, basketball fans have been subjected to debate about who the best “two-way” shooting guard is. And in basketball, this concept matters—at least slightly. When building a team, front offices have to take into account how their players interact on both sides of the floor: a dominant offensive shooting guard who doesn’t play a lick of defense has to be compensated for in a way that someone who is very good on both ends doesn’t. Both players are considered excellent, but the way they generate their value is relevant.

In baseball, this is not the case as much. Value is value, because the players on the field simply don’t interact in the same way as they do in other sports. To quote Bill Simmons from 2009: “baseball is an individual sport masquerading as a team sport.” Players do their individual jobs, and—except for pitchers’ reliance on their catchers—they are not affected much by what anyone else on their team does.

Therefore, if Lucroy is a four- or five-win player, he’s great. It does not matter whether he does that by being good with both his bat and his glove or whether he does it by being excellent at just one. However, it’s easier to weather some decline if one has a diverse skillset. So while Lucroy is still an excellent player, the Brewers (and/or whomever his next employer is) would be thrilled to see his framing numbers rebound.

Tags: Jonathan Lucroy |
Seth Victor
Follow @sh_vic
Seth is currently a student at UCLA School of Law. He is also a recent graduate of UC Berkeley, where he majored in Political Science and played club baseball.
read more from Seth Victor

3 comments on “How Lucroy’s Defensive Decline Affects His Value”

There’s a discussion going on elsewhere about Lucroy and framing, on the premise that he got too good at it, and by standing out (and by people writing about framing) he drew umpires’ attention to himself. Framing is tricking the umpire, getting them to call a ball a strike. Umpires don’t exist in a different universe, they read this stuff, and they don’t like being tricked. Ergo, they focus harder on catchers like Lucroy, work out how they are framing, and get better at distinguishing balls and strikes when he is catching. Or, they simply think – this is Lucroy, he must be framing my ass, and call more marginal pitches balls instead of strikes.

Agree Kalimantan. I’ve umpired before- nothing serious- and balls and strikes are registered when the ball crosses the plate. You know at that point and start the call, not waiting to see where the C holds his pose or jerks his glove. Also, in order to develop consistency a push has been made to standarize the strike zone and umps are held to a truer standard. Without checking I would guess framing rates are down across baseball the last couple years. Luc’s huge number of CS isn’t mentioned, although opportunity may factor in.