Tl;dr: The Brewers blew open a tight game with a five run eighth inning to beat the Diamondbacks 9-4.

Top Play (WPA): In the top of the seventh inning, Paul Goldschmidt hit a RBI single which tied the game at 4 and also advanced Jean Segura to second base (.181). The play itself was fluky. Goldschmidt attempted to check his swing on a low and outside pitch, but he got a piece of the ball and hit a sharp liner right at Chris Carter, who was playing in with runners on the corners. Carter dove for the ball, but it glanced off his glove. He recovered quickly, but at that point, everyone was safe, and the Diamondbacks had tied the game.

Bottom Play (WPA): Chris Carter came to the plate with the score tied at 3, runners on first and second, and no outs in the bottom of the sixth inning. Arizona pulled starter Patrick Corbin in favor of Enrique Burgos for the at bat. After starting off Carter with a fastball away, Burgos threw three straight sliders inside on Carter. Carter swung at the first slider and looked at the second for a called strike. He swung again at the third, but unfortunately grounded into a double play for a negative .139 WPA on the play. Though Scooter Gennett drove in Ryan Braun in the next at bat, a potential big inning was lost. Per the Baseball Prospectus expected runs matrix, the Brewers expected runs in the inning fell from 1.46 before the double play to .36 runs afterwards.

Anatomy of a Big Inning: As mentioned at the top, the Brewers scored five runs in the bottom of the eighth inning to take control of the game. The barrage of runs came solely through walks and singles, as the Brewers exhibited patience and let Arizona pitchers Daniel Hudson and Zac Curtis beat themselves. Looking at Brooks Baseball’s Game Logs, Hudson threw twelve pitches out of the zone and the Brewers only swing at two. Curtis threw ten pitches out of the zone with the Brewers swinging at one. By waiting and forcing the bullpen corps to find the zone, the Brewers let Arizona beat themselves.

Trend to Watch: Since this is deadline week, it’s worth taking a look at Matt Garza’s start. In total, his line of six innings pitched with three runs allowed is respectable. If a team wants Matt Garza, the Brewers aren’t getting a Drew Pomeranz return. He’s a back end guy whose job would be to soak up some innings and not lose the game for his team. And while he had a strong start to the season, his three runs allowed last night were his fewest since his second start of the season back in June.

Last night, Garza’s problem innings were the first and fourth, while he cruised in his other four innings, allowing only one baserunner. I’ve split out his start into the problem innings and the clean innings below: 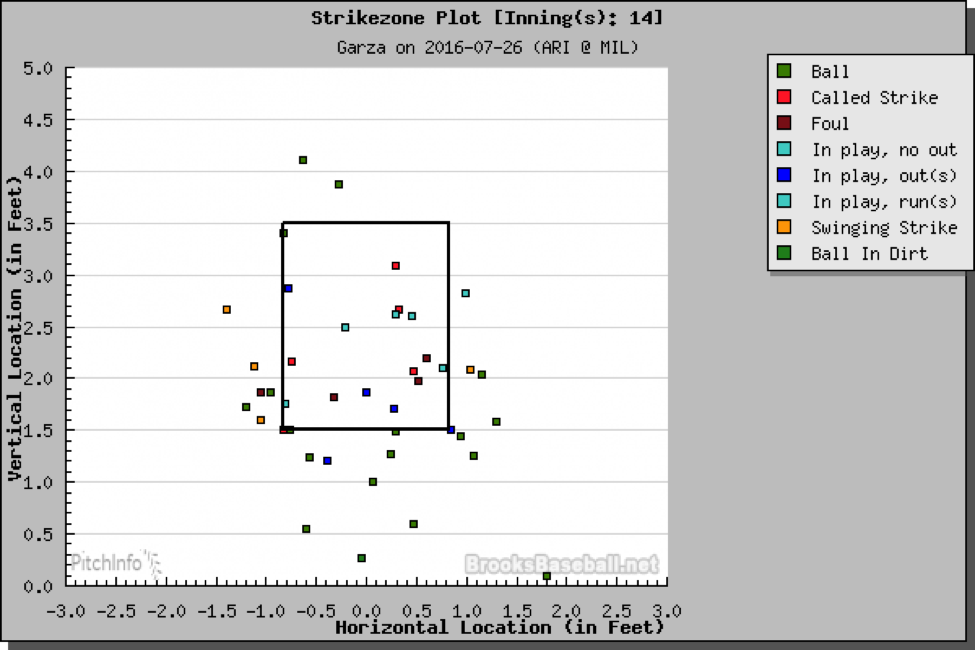 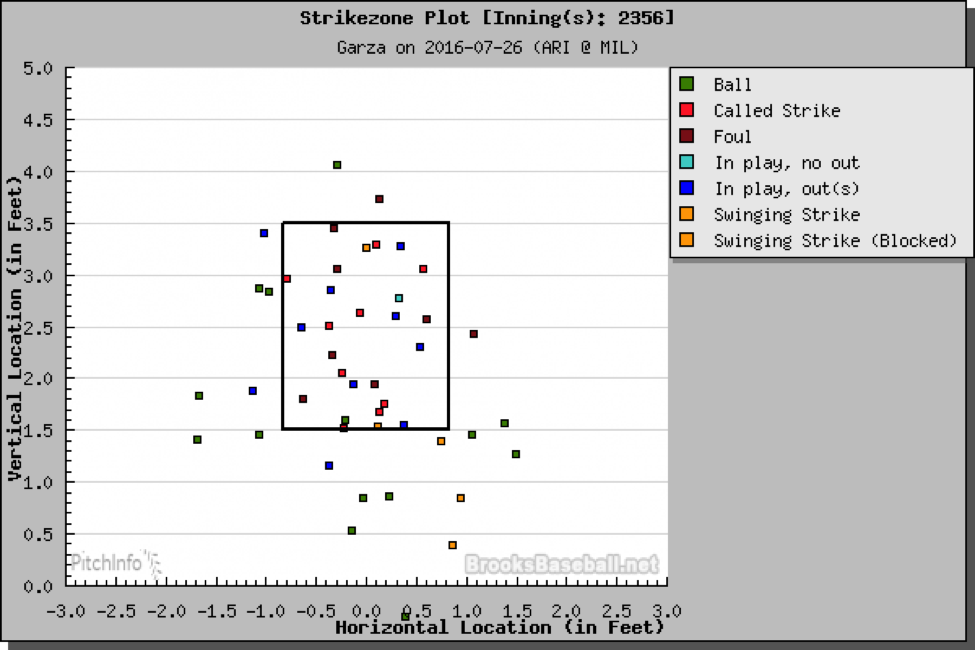 While each chart certainly features Garza trying to attack the bottom (and below) of the strike zone, the marked difference is the amount of strikes Garza threw in his good innings. Rather than trying to paint the corners and make the perfect pitch, it looks like in the clean innings Garza challenged the Diamondbacks to hit his pitches. They generally couldn’t. That’s how Garza needs to make his living, and how the Brewers need to sell him this week, and into August. There’s a serviceable pitcher in there and he can turn himself into a viable option for a team that’s getting nothing from the back end of its rotation like, say, the Red Sox.

Up Next: The Brewers look to continue their successful series tonight against Arizona. Jimmy Nelson will start for Milwaukee. Nelson lost his last start against the Cubs, pitching five innings while allowing four runs. Archie Bradley takes the hill for the Diamondbacks. He also lost his last start. Last week he pitched against Cincinnati and only lasted five innings and allowed three runs off five hits and five walks. First pitch is 7:10.

Tags: Matt Garza, Scooter Gennett |
Andrew Salzman
Follow @RealAndrewSalz
Personal fun facts: I've been to every current MLB stadium, my favorite animals are bears, and I consider myself an expert on fast food. I also really like baseball and am a licensed lawyer.
read more from Andrew Salzman