Coming into this season, there was significant optimism surrounding Jimmy Nelson. He was heading into his age-27 season, and the Brewers were hoping he would take a step forward and establish his place in the rotation for years to come. PECOTA saw good things for him, with his 50th-percentile projection being 2.6 WARP and a 4.14 DRA.

But that is not at all what has happened. Nelson has been one of the worst pitchers in baseball (tenth-worst DRA among all pitchers with at least 100 innings pitched entering San Diego), and at this point there have to be questions about his future. Nelson’s start at Petco Park added to those questions.

The big difference between his PECOTA projections and actual performance is his walk rate. PECOTA’s median projection had Nelson with 59 walks in 180 innings, or a BB/9 of 2.95. However, he has actually posted a BB/9 of 4.0—and that is a clear problem. It is worse than both his 2015 mark of 3.3 and his career mark of 3.4.

Clearly, PECOTA foresaw a command improvement that simply has not materialized. Instead, Nelson has backslid. But why exactly? A look at his player card on Brooks Baseball shows that he has had trouble with delivery consistency.

An obvious statement: pitchers improve by getting better at things they aren’t as good at. But in order to do that, they need to maintain the baseline level they have established. There’s no way that Nelson spent the offseason not trying to get better, but whatever he was working on appears to have come at the expense of his command.

As the graphs below demonstrate, Nelson held a relatively stable release point through 2015, but it has gone all over the place in 2016. 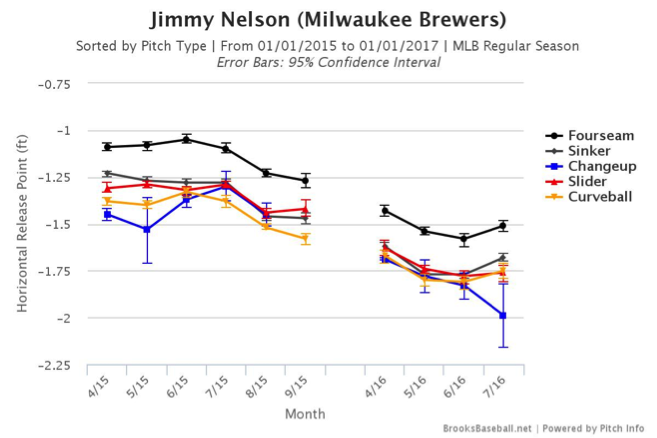 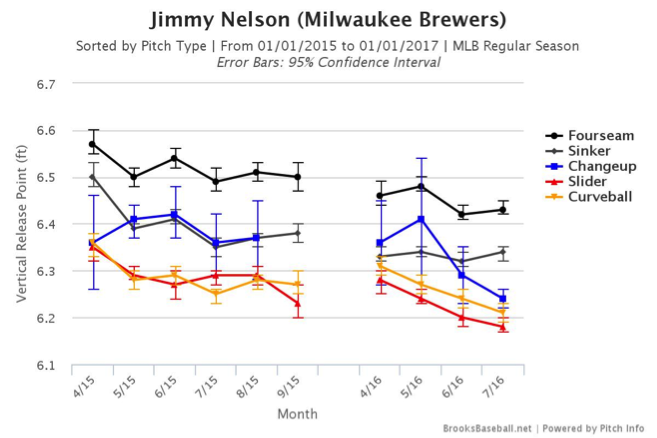 His horizontal release point has actually stayed relatively consistent in 2016, but his vertical release points have all moved wildly throughout this year. The fact that he is continually changing the height of his arm suggests either that he is hurt or struggling to find something that works for him, and only he (and presumably the team) know for sure which it is.

The second concerning part of the graphs is the big change from last year to this year. As was mentioned above, baseball players get better by improving on their baseline talent level—but Nelson has been unable to do that. For a real improvement, one would have liked to see him maintain what worked for him last year, but instead his various release points look nothing like they did last year. Yet again, this could suggest injury.

Finally, the most concerning aspect is how dissimilar each pitch looks to the others. Pitchers are taught to repeat their delivery for many reasons, but two are most significant: consistency and deception. Being able to repeat one’s delivery makes it easier to make adjustments and/or improvements because less thought needs to be paid to the general motion and more focus can be on the smaller adjustments that need to be made. It also helps with deception because when each pitch is released at the same point, hitters have a more difficult time deciphering which pitch is coming.

Nelson, though, has not been doing that. Instead, as the graphs above show, he is releasing each pitch at wildly varying spots. This contrasts directly with what pitchers should be trying to do, as demonstrated by Max Scherzer’s release point graph below. With the exception of his curveball, Scherzer releases all of his pitchers within the same window of roughly one inch. Nelson, though, has had an approximately three-inch gap between the upper and lower points on his graph all year. 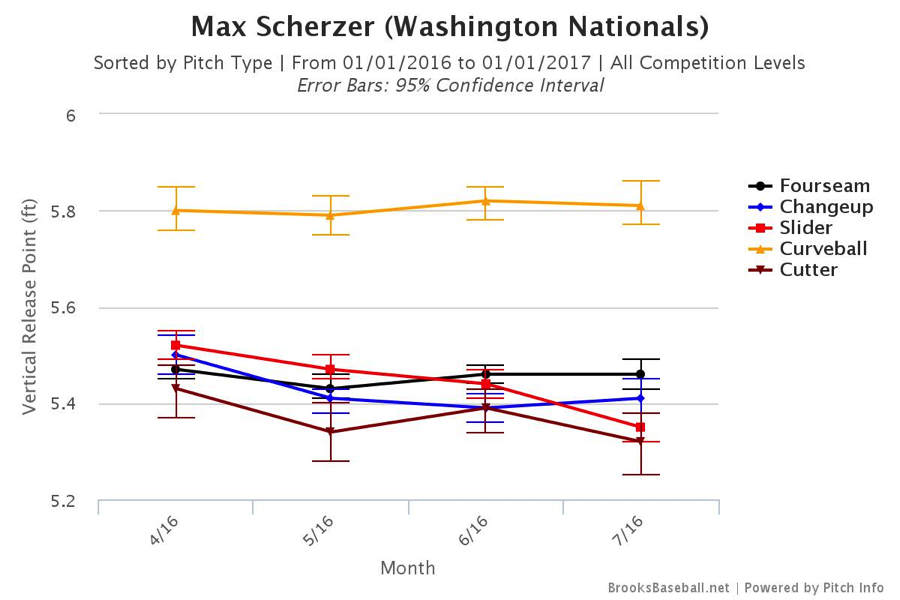 Obviously, Jimmy Nelson is not Max Scherzer, but this contrast is designed to demonstrate what Nelson should be striving for. However, he has simply been unable to find consistency in his delivery. And given that his struggles this year have been related to his command, this looks to be an indicator of where the problems are.

If I didn’t know better, I’d suggest that he was injured as we often see release point changes when pitchers try to compensate for pain in certain areas. However, with the team having no hope of a playoff berth and Nelson’s development being integral to their plans moving forward, having him pitch through any sort of pain simply makes no sense.   Instead, I can only assume that Nelson has been unable to find his delivery and has been fighting it all year.

The good news here is that release point issues do not have to be permanent. Pitchers work on their mechanics all the time, and it is entirely possible that Nelson figures out where he needs to release the ball and gets his command issues under control. If he can do that, his future can look bright again.