Top Play: Ryan Braun’s solo home run to lead off the sixth inning, and put the Brewers in the lead 2-1, was the top play of the game (.182). Padres starter Luis Perdomo hung a curveball to Braun on his first pitch of the inning, and Braun crushed it. Perdomo then allowed a single to Hernan Perez and a double to Chris Carter, and it looked like the Brewers could make it an easy game. However, Perdomo induced grounders from the next two batters, then intentionally loaded the bases for Zach Davies, who he struck out.

Bottom Play: Alex Dickerson’s ground out to second base to lead off the bottom of the ninth inning was the bottom play of the game, according to WPA (-.079). Dickerson was the only batter to not strike out against Tyler Thornburg in the 9th inning.

The closest play to that groundout according to WPA was Derek Norris’ fly out to end the sixth inning with Dickerson on second base. Jabari Blash had just singled to score the second Padres run and knock Davies out of the game. Carlos Torres entered and got the flyout on two pitches to end the last rally for the Padres, as they did not have another batter reach base for the remainder of the game. Looking at the two pitches in the at bat, I think Norris would like to have another chance at that second pitch: 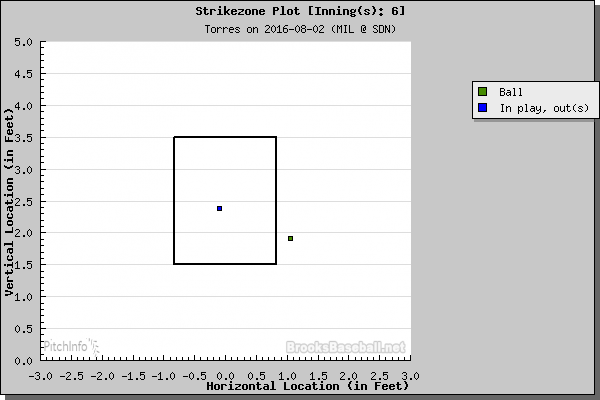 Trends to Watch: Orlando Arcia Mania!!! Forgive Brewers fans for their excitement, but the Arcia call up will probably be the most exciting moment that has any lasting impact on the franchise for the rest of the season. Arcia batted seventh, and his presence meant that Villar slid over to third base, Villar’s likely home for the rest of the season. For all the breathless excitement over Arcia’s debut, it was not an auspicious day at the plate. He was hitless in his four at-bats, with one strikeout and three groundouts. To take away a positive, Arcia did see 15 pitches, which hopefully bodes well for continued improvement in his plate discipline.

Tyler Thornburg got the first post Jeremy Jeffress save opportunity. Thornburg needed 14 pitches to complete the ninth inning, striking out two Padres. Thornburg will fit the mold of a fireballing closer a bit more than Jeffress, as he has a higher strikeout rate (12.4 K/9 compared to Jeffress’ 7.1). To illustrate the point a bit further, Thornburg has at least two strikeouts in eighteen of his forty-five appearances this year. Jeffress achieved that in only eight of his forty-seven games with the Brewers. Jeffress was an outlier for a closer in 2016, and the Brewers should see no drop off in the ninth inning as Thornburg settles into the role.

Up Next: After splitting the first two games in San Diego, the Brewers look to get the series win against the Padres this afternoon. Junior Guerra will start for Milwaukee. He fell one out shy of a complete game last week against the Pirates. In that game, he struck out five and allowed one run on four hits and a walk. Guerra has  only allowed eight runs in his last seven starts. Edwin Jackson will make his fourth start of the season for San Diego. After two decent starts to begin the Padres chapter of his career, the Reds scored six runs in five innings in his last start. Jackson allowed ten hits and two walks against three strikeouts. First pitch is 2:40.

Tags: Orlando Arcia, Ryan Braun, Tyler Thornburg |
Andrew Salzman
Follow @RealAndrewSalz
Personal fun facts: I've been to every current MLB stadium, my favorite animals are bears, and I consider myself an expert on fast food. I also really like baseball and am a licensed lawyer.
read more from Andrew Salzman